In continuation of their impressive product development, and hoping to live up to the prestige gained from their previous forays into high end hi-fi, Cambridge Audio have expanded their flagship 851 series with a range of pre and power amplifiers for the modern age.

The 851A (integrated amplifier) and 851C (CD player and DAC) were released Autumn 2012. As well as winning the prestigious EISA Best Product Award 2013 and gaining countless 5 star reviews, the components have been the staple backbone of our in-store demonstration hi-fi ever since.

Moving the 851E (pre-amplifier) and 851W (power amplifier) to our home-styled demo room, I got a good idea of what to expect from the expanded 851 series. These are supremely well built bits of kit. The 851W power amplifier comes in at a staggering 19.1kg (a fact that was not lost on my arms whilst positioning the beast on our rack). The 851E is substantially lighter, but nonetheless, its build felt reassuringly solid. The lovely brushed metal faceplate used across the series is thick; a real substantial piece of aluminium that wolf-whistles its pedigree at you from across the room. At these price points, all of this is usually a prerequisite – but expectations aren’t always fulfilled and the design work here earns noteworthy top marks.

Cambridge’s now-signature grilles allow a glimmer into the mechanical majesty beneath, and these decorative but essential points of ventilation would be equally well suited were they festooned on an Italian automobile engine bay. Forza Cambridge!

Pre and Power in black finish.

The 851W dedicated power amplifier’s substantial heft allows it to pump out 200 watts into an 8ohm load in stereo mode and up to 500 watts in a bridged-mono configuration; although this requires the use of two 851W‘s in order to work. All of this power may sound frightening, with most people mistakenly confusing power with volume, or with potential damage to their speakers.

An analogy often quoted on power output is comparing amplifier wattage to car torque. High torque will result in fantastic acceleration when applied correctly. This is much the same with hi-fi. Wattage, when applied efficiently to a speaker, will give the sound “acceleration” when needed. A higher wattage will generally give much improved dynamics and separation when played at lower volumes. Underpowered amps generally lose their ability to convey soundstaging, and to uncover fine detail when played quietly.

It’s accurate to say that power = lower distortion and reduced likelihood that clipping will occur. Headroom is a key term in describing what an amplifier should ideally give you when cranked up to asbo-inducing levels (disclaimer: this is not an endorsement to behave antisocially with your volume!): the sound doesn’t suddenly flatten out and lose all of its spatiality and openness.

In terms of sonic representation, the 851W offered an effortless sense of air around female vocals, with Beth Orton’s wispy affectations on Air’s All I Need sounding clear and crisp, but not harsh.

The 851E is a traditional analogue pre-amplifier, with 8 inputs (3 of which can be switched between balanced XLR and phono). No digital inputs are accounted for, but used alongside the 851C (CD player with digital input DAC) this option is brought back into the fold. The 851E has the same crisp display on the front as the 851A before it. The fully customisable interface is both classy and practical in design. Cambridge Audio states almost zero distortion was measured from the 851E’s output: the engineers have been hell-bent on achieving these microscopic figures going back to the original award-winning 840 series.

With CD player hooked up to pre-amplifier, through its XLR outputs, and with corresponding XLR’s routed back out to the power amplifier, the system was ready to go.

French down-tempo demigods Air provided our first tunes of the day, with their revered classic debut Moon Safari. Its influence on music since its release stretches wide and deep, spawning a range of imitators worldwide and sound-tracking creaky Sunday morning comedowns for a generation. The sultry vocals of Beth Orton are woven throughout tracks, supplemented by warm analogue instrumentation. Ce Matin Là with its gorgeous, softly played trombone and shimmery, lilting strings sounded resoundingly open, with a real orchestral feel to such an intimate track. The Cambridge held all of the instruments together, separating the necessary parts but retaining the full-sounding production in all its glory. All I Need gave Orton’s superb vocals centre stage, flanked by the sunset-tinged bass line, and accompanied by the string section, earning their keep again.

This pure analogue pre and power system by Cambridge Audio is for the true purist. The level of detail, dynamics, soundstaging and timing were, quite frankly, superb!

However, if you would permit me to momentarily dismiss use of all ostentatious audiophile terms to describe the 851 series… What we are really looking for is sound reproduction: a natural sound, designed to perfectly replicate the music created by the artist.

In my humble opinion, never before has it sounded as much like the singer was here in the demonstration room with me. On the basis that it would cost in excess of $1,000,000 to hire a singer of the calibre of Bruce Springsteen or Madonna, suddenly the price tag on Cambridge Audio’s flagship analogue audio amplification seems remarkably good value for money. Be careful when listening to the Cambridge Audio 851 series… everything else will pale in comparison. 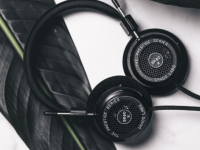 Open back headphone pioneers Grado recently announced an update to their legendary Prestige range with the new and improved X driver. These headphones have been…read more →