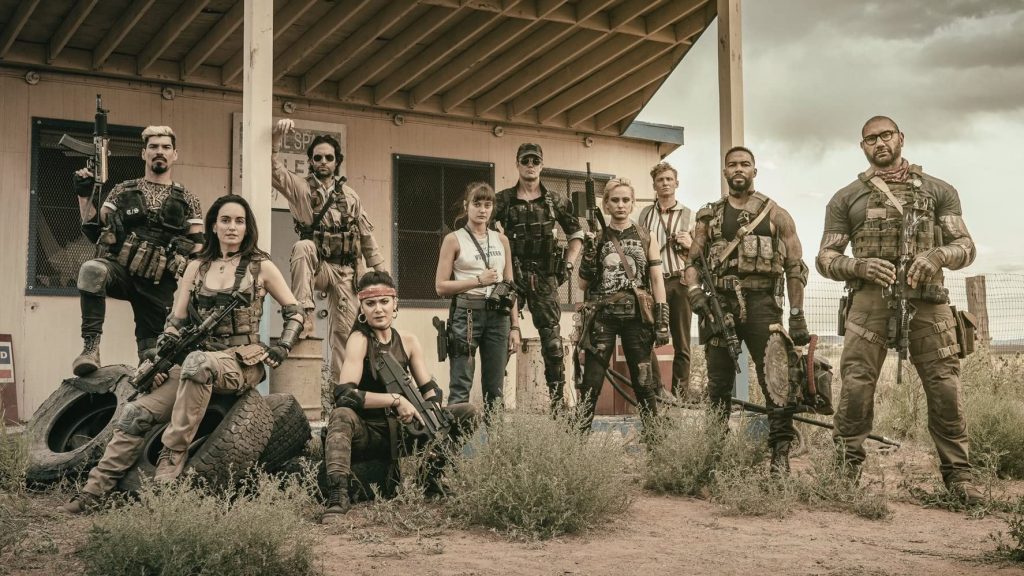 It begins as most zombie movies do, with the accidental release of something naughty a government has been holding on to. There is an almost Shaun of the Dead nonchalance to the perceived severity by those involved. The situation inevitably spirals out of control to the point Las Vegas becomes a city of the dead and cut off from society. Scott Ward (Dave Bautista) is contracted to dive into the midst of everything on a daring heist for life changing amounts of cash.

As simple as the story is, there are endless attempts to complicate it and add something of substance to the plot. This does provide something to break up the tedium of the one hundred and eighty minutes, but it does not elevate the plot to anything ground-breaking. The action is certainly polished and comes with gore aplenty. The movie is fast paced and does hold your attention visually as you would expect from Synder. The cast has some highlights like Tig Notaro, who stands out with her dry wit as a gritty helicopter pilot. Bautista plays a much more two-dimensional character than the likes of his Draxx the Destroyer, from Guardians of The Galaxy. He is still an eye-catching action hero, but he definitely has more range than was required here. Theo Rossi plays a fantastic side villain that sits at the right level of toxic slimeball to keep you fired up when he is around. The real star however is the bromance between Deiter and Vanderohe, this unlikely duo generate genuinely amusing character arcs and development. As polar opposites and eccentric in their extremes of machismo or perceived lack thereof there is quite the stage for light hearted banter. I see the new film trailer for the prequal (Army of Theives), features Deiter exclusively, so it is clearly not just me that found him the star of the show.

I would normally suggest this kind of film for a casual watch; however, the run time rather makes this more of an invested decision. If you are half watching something with friends and some beers then this might be a suitable choice. As an overall package it left me remarkably nonplussed, I did not dislike the film and it didn’t feel like it dragged, however I had the unshakeable sense I could have invested my time much more wisely.