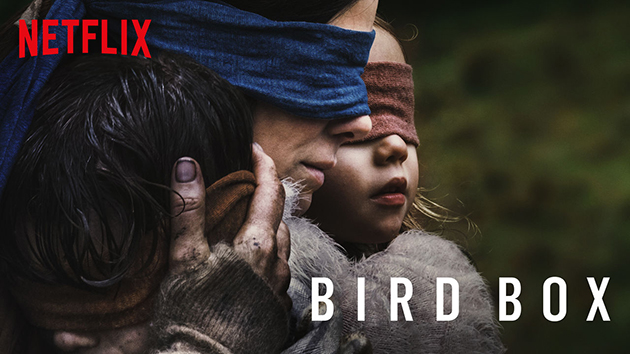 From time to time a new film comes out, and people just can’t stop talking about it. It happened with Jaws, Titanic, Avatar and now there is a new film on everyone’s lips.  However, does Bird Box live up to all the hype?

Netflix original Bird Box has already become the streaming media giant’s biggest hit to-date with over 45 million of the platform’s subscribers watching the film within its first week. From celebrities sharing their views all over social media to work colleagues rambling on about the thriller, the chances are that you would have heard at least a little bit about Bird Box. But why is it such a hit?

The film, based on a novel of the same name by John Malerman, is set in a post-apocalyptic world where lead actress Sandra Bullock stars as ‘Malorie’, a courageous woman who has battled the odds and survived throughout the 5 years of apocalypse and is faced with the task of rowing down a river blindfolded with two young children in order to avoid being subjected to a mysterious force. One glimpse at the force causes the unlucky viewer to violently kill themselves.

Starring John Malkovich and Sarah Paulson alongside Bullock, the Netflix original is not short of decorated actors, and their performances certainly match expectations; Bullock is commanding throughout and Malkovich absolutely nails his role as an aggressive drunken widower. Unlike other thrillers and horrors, Bird Box has a refreshingly innovative plot and presents smart ideas throughout, however, this is counterbalanced by huge holes in the logistics of the script. It’s hard to watch the film from start to finish without feeling a void that should have been filled with suspense rather than close-up’s of Sandra Bullock’s somewhat pre-apocalyptic make-up laden face. When the camera is not centred on Bullock, the cinematography is simply stunning, particularly the misty scenes on the river, which can be credited to Salvatore Totino.

The constant use of the blindfold operates as a motif throughout the film and has catapulted a staggering fascination amongst captivated viewers. Thousands of fans worldwide have been taking to social media to share videos in which they challenge themselves to take on various tasks blindfolded. Dubbed the ‘Bird Box challenge’, fans have filmed themselves engaging in mundane tasks such as writing and shopping blindfolded. However, more worryingly, this craze has spread to more dangerous activities such as walking on train tracks and even driving, which unsurprisingly, has resulted in car accidents.

There’s no doubt Bird Box has been a hit on Netflix, racking up millions of streams, easily generating more revenue than the mere $19.8m budget. Such an extraordinary film has not avoided criticism, in fact in many ways it has attracted it. Unanswered questions frustratingly remain and if it weren’t for such a studded cast, the film would most likely have died quicker than anyone who dare take off their blindfold.