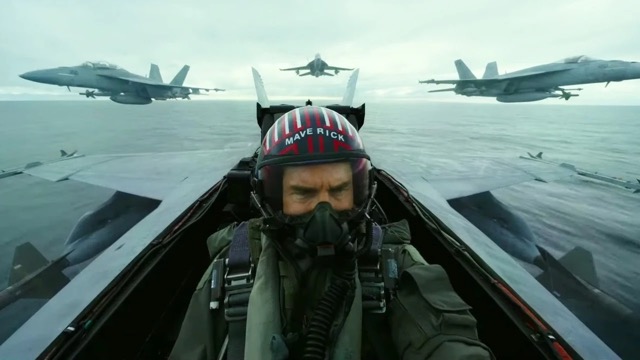 36 years after the original flew into cinemas Tom Cruise is back as Pete ‘Maverick’ Mitchell in this belated (and highly anticipated) sequel to one of the defining blockbusters of the 1980s.

Picking up three decades after the events of Top Gun, Pete ‘Maverick’ Mitchell (Cruise) is still feeling the need for speed as a test pilot. But when that programme is threatened with closure due to drone technology, it’s clear that Maverick is part of a dying breed that the navy sees as surplus to requirements. That is until an impossible mission (sorry) needs Maverick to come back to Top Gun and train the best of the best to be even better. When he returns to the academy, he is faced with shadows of his past, as the son of his departed friend a co-pilot (Goose) is part of the elite group of pilots he needs to train.

Despite the original setting a benchmark for aerial combat and its soundtrack (both of which hold up wonderfully), the original Top Gun does not stand up too well today. The story isn’t great, Maverick as a character is a borderline unwatchable, and the less said about the protracted sex scene the better. So it was with a slight sense of trepidation that I ventured out for the sequel but any concerns should be left at the door of your local multiplex.

A lot has changed for Cruise since the original and he is now a bona-fide big shot producer who takes a hands on approach in every film he makes. His partnership with Christopher McQuarrie (on co-writing duties here) delivered some of the best action films in recent years with the Mission Impossible series and he’s worked with director Joseph Kosinski before on the beautiful (if divisive) Oblivion. This mix of talent behind the camera is key to the Maverick’s success, Kosinski’s visuals are incredible and the writing is a considerable improvement on what we have seen before.

It is rare but there are a handful of sequels that are better than the original, ‘Maverick’ is firmly in this camp and whilst it doesn’t tread any new ground, what it does, it does very very well. The pace is unrelenting from start to finish, the characters are engaging and the performances convincing. There is a real sense of heart to the film and you get the impression from the actors that everyone wanted to be here and make something special. A mention needs to be made of the touching return of a sadly unwell Val Kilmer, who returns here as ‘Iceman’ despite a long running battle with throat cancer. But the writers handle this well and his on screen reunion with Cruise is one of the film’s most poignant moments.

The rest of the cast do a fantastic job of supporting Cruise in the film, with a standout performance from Miles Teller playing Bradley ‘Rooster’ Bradshaw, son of ill-fated ‘Goose’ played by Anthony Edwards in the original film. Maverick’s rocky relationship with Rooster as a surrogate father of sorts, is the source of many a tense moment in the film, however it never strays too far into melodrama.

Ed Harris and Jon Hamm provide stoic turns as Maverick’s disapproving commanding officers, never letting him forget that if he fails, he’ll be out of the Navy for good. However, when Maverick runs into old flame Penny Benjamin, played by Jennifer Connelly, she gives him a glimpse of a happy life with two feet on the ground. Some have said this relationship feels a little shoehorned into the film, however even without much to do, Connelly’s mature, confident performance anchors the film in a way that makes you genuinely root for them as a couple.

The aerial photography is absolutely jaw dropping and the action scenes are a cut above anything seen since the original film. Whatever you think of Tom Cruise personally, his commitment to the art form cannot be disputed. Minimal CGI, exceptional stunt work and in this case the cast actually filming themselves in fighter jets all add up to deliver to a top tier cinema experience that should be seen on the largest screen possible.

In the midst of a crowded, CGI heavy blockbuster season Top Gun: Maverick can hold its head high as the most entertaining action film since MI: Fallout and on repeat viewings may even outdo it.