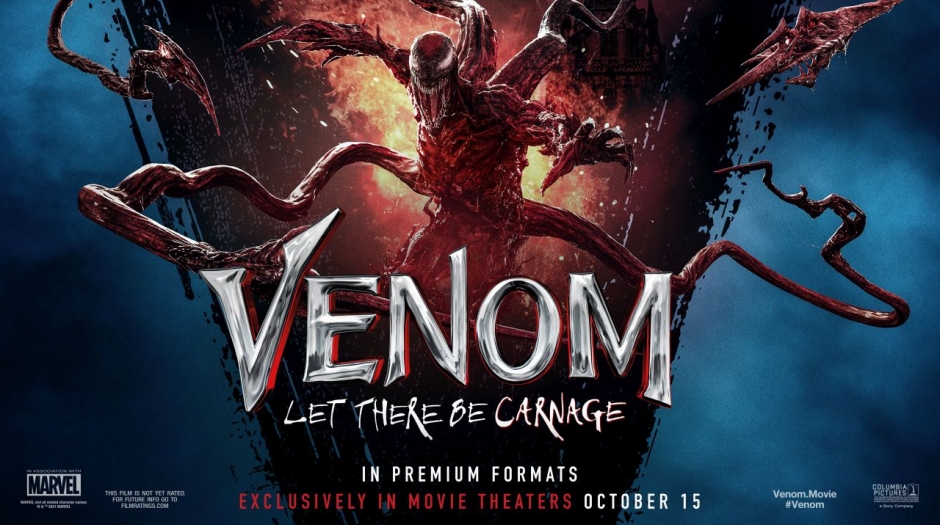 “Symbiosis is described as the relationship or interaction between two dissimilar organisms of separate species”.

The key theme for Venom 2 is this very aspect – can two very different species survive and thrive together?

I personally enjoyed the first Venom movie a lot and found it to be an entertaining way to bring in a character that’s been around Marvel lore for decades (primarily as a Spider-Man villain). The reviews weren’t so favourable but the success at the box office meant that a second film was shortly announced afterwards. Tom Hardy returns as the gruff reporter who is down on his luck and in need of a break to fix his work and personal life. That doesn’t include the fact he is playing host to Venom who is getting more and more irrational by the lack of people he is not eating. We get several quite comedic moments in this film especially early on, as they try to live together in one apartment which only leads to destruction and mayhem!

Eddie Brock’s (Tom Hardy) luck changes when he gets the scoop of the lifetime – it is a shallow victory as in doing so a new terror is released into the world in the shape of Woody Harrelson’s serial killer character Cletus Kasady gaining his own very red and very angry symbiote Carnage!

This is where the plot does get a bit wayward as Venom and Eddie have their differences and Carnage does lots of…carnage. The set pieces are impressive as seen from the first film and the directorship of Andy Serkis (this time directing rather than being an animated chimp!) helps net the whole thing together at a pace which really makes the film fly along. So many films now are too long so this was a major reprieve! The supporting cast of Eddie’s former fiancé and her now fiancé aid some comic relief. However, you can tell there is still some tension between the former love interests that is scratched upon but not fully developed. This I first thought to be underdeveloped but makes sense when the film comes to its conclusion.

There is a second love interest that drives Cletus which is portrayed by the talented Naomi Harris, I find this aspect to be a bit messy. She really dives into the role which is almost similar to her parts in Pirates of the Caribbean but a far cry from the more sedate role of Moneypenny in Bond. It helps Harrelson’s character no end but I find her to be a bit wasted. There are some abilities that she presents that go unanswered…which brings up more questions especially in the ‘Marvelverse’.

On the whole, I enjoyed the film and thought that although not as unique as the first it was defiantly a step forward in its sincerity and I am going to contradict myself now but I think it could have been a bit longer. The stand out character for me was definitely Woody Harrelson. He portrayed the sinister Cletus to a tee and really showed off his acting talents. I have seen him in numerous features, nothing where he acts as chillingly as this. I got vibes from him that I last got from Heath Ledger’s Joker. The type of character who enjoys what they do and just wants to watch the world burn.

The weaker aspect I found was Carnage the symbiote, as he appears to bring forward some new powers that made me just sit there puzzled. I felt his character wasn’t as developed as he should have been. Maybe with a longer run time he could have had more fleshing out on screen (pun not intended).