The Summer Series at Somerset House returns with another diverse selection of artists, for what promises to be one of the musical events of the Summer…

Monday’s headliner was one of the performers on everyone’s lips this year – George Ezra. Having scored a UK number 1 album with his 2014 debut release Wanted On Voyage, he has already completed 3 sold-out tours. It’s no surprise to hear Apple’s new global DJ Zane Lowe describe him as “one of the most compelling and powerful new vocalists around.”

The sell-out crowd arrived early to catch support-for-the-evening Flo Morrissey. The 20 year old is a talent to watch for 2015, already wowing the crowds at Glastonbury Festival. Having taken her early influences of Nick Drake and Bob Dylan, she has expanded her repertoire and is now as confident a performer as you are likely to see.

The surprise event of the evening came at 8 o’clock. The fans lucky enough to have tickets to the The Enhanced Bar with Cambridge Audio were in for a treat. Headliner Ezra made a surprise visit for an impromptu meet and greet. The 22 year old from Hertford, England made the select few fans’ night as he popped-in to pose for photographs and generally delight the present crowd. As one onlooker said, “He’s such a genuine, great guy! We had no idea he would be meeting fans, I feel so lucky. We even managed to get our photo taken with him. My friends are going to be so jealous!”

With over 280 million Spotify plays to his name, we know he’s doing something right. He took to the stage for a highly anticipated set full of favourites – including Blind Man in Amsterdam, Barcelona and international smash hit Blame It On Me. It was crowd favourite Budapest that grew the biggest sing-along of the night. With many a fan leaving with smiles on their faces, and (given the enthusiasm of their singing) probably a sore throat or two, George Ezra has once again proven why he is such a big box-office name. Entertainment of the highest order. 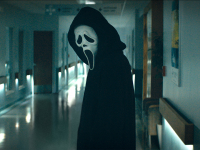 A nostalgic trip for fans of the Scream franchise, while keeping things fresh with the new cast. Scream (2022) picks up 11 years after the events…read more →