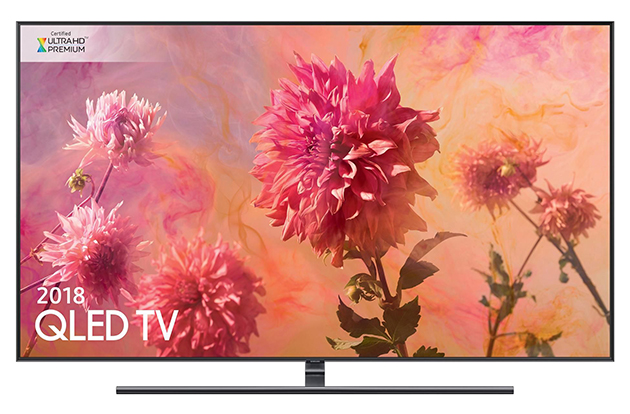 There has quite literally never been more choice for televisions (and what to watch) than there is now. This can definitely make choosing the right one a minefield and can make it a struggle to stand out amongst the competition.

For Samsung’s new Q9FN Series however, standing out won’t be an issue.

Starting at 55″ for the smallest and currently topping out at 75″ for the largest screen the Q9FN range is definitely intended for larger rooms or cinematic use. 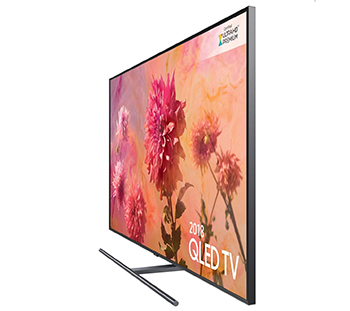 This is Samsung’s first foray in recent years into the use of a full array backlight for one of their series. Whereas the vast majority of TVs on the market will use edge lit LED technology to run their panels, (strips of backlighting on the edges of the screen that fire the light across the screen to create your picture), a full array backlight means that the screen has a considerable amount more control over the image due to more ‘zones’ of light. This ensures your motion, colour and contrast should all see an improvement over edge-lit models.

I (along with some very keen colleagues) unboxed the 75″ of Samsung’s new Q9FN range to get a closer look.

First off, it’s immediately apparent that Samsung have put a lot of attention into ensuring that the TV looks good from all possible angles by decluttering the rear and sides of the TV. This mean there’s no large volume of HDMI ports and cabling needed to be run to the television itself by implementing their inspired One Connect Box from previous years. There is however, a little twist this time around; the power now goes solely through the Near-Invisible Cable. Previously, the QLED Televisions needed two power sources – one for the One Connect Box and one for the screen itself. However, with a lot of tech know-how the power can now be transmitted over the five meter long near-invisible cable. This means you can run your devices and the One Connect Box away easily into a rack, cupboard or sideboard and only have to see the TV. 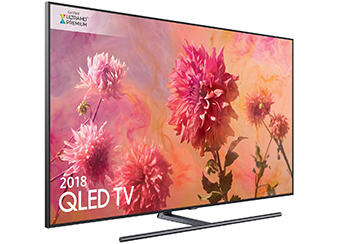 In the case of the 75″, once we had it up on the wall – it can look a little imposing once the TV is off/before it’s powered on. Thankfully, by borrowing a bit of technology from their own Frame series, the TV’s ambient mode can help it blend in. From choices ranging from art, your own images, background music and even blending it with the wallpaper, once again the interior design element has been well and truly realised by Samsung.

On to the main point for most however – the picture. Upon set up, I opted to run our Oppo UDP-203 4K Blu-Ray player into it and find the film most suited for quality and to push the TV it’s colour limits (it is a Samsung after all) – Guardians Of The Galaxy Vol. 2. 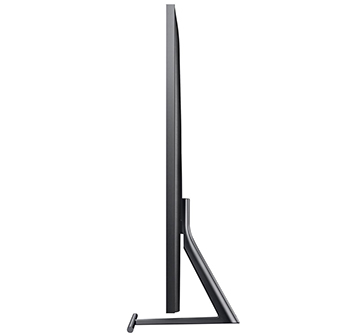 Quoting 100% colour volume of industry standard DCI-P3 means very little on paper, it looks like the tech jargon it is. In practice however, with the right source, it’s really quite special. Whilst OLED technology will still give you a thinner TV and deeper blacks than Samsung’s Q9FN range, they don’t have quite the same brightness for the initial “WOW!” factor.

The lush alien worlds of GOTG2 are extremely well-defined and detailed amidst the saturation of colour the screen is capable of reproducing. The mid-space scenes display a range of stars that a traditional screen might easily miss, making the textures of darker scenes richer and more engaging.

In the moving, bittersweet scene between Drax and Mantis as they stare out onto the water features, the background materials of the steps and walls are easier to define, drawing you further into the movie and skin tones upon close ups are natural amidst the bright, alien landscapes. When the fight scenes kick in and the motion comes into play, so does the backlight. In a big step up from previous QLED models, there is a substantially less motion tracking than we’ve seen before making motion more natural with far less judder. As the TV is still backlit, not an OLED, the motion can’t quite keep up with some of the OLED competition; but it’s a close one.

Overall, Samsung have created a flagship series this year which is truly worthy of the hype. For a TV with quite literally all the bells and whistles, pop into your local Richer Sounds to check out this exciting new range.

Click to find out more about the Samsung Q9FN TV range.