Having been a reviewer here on the Tech Blog since its infancy, I’ve seen my fair share of new and interesting products come to market. From the highest of high-end hi-fi to shiny new TV technology, all of these fantastic gizmos look to draw attention to themselves straight from the off. But one in particular really managed to turn my head this week. Meet the snappily-titled Sony GTK-XB7.

You see, the XB7 (as we’ll call it!) is a Bluetooth speaker. What’s that you say? They’ve been around for donkeys years? You can’t move for them these days? Quite so, dear reader, but, few of these speakers are as imposing as the XB7. The Sony’s sheer size was the first thing that struck me when it arrived in store. At 65cm in length, 34cm deep and 32cm in height (when laid horizontally), the XB7 is monumental. Sure there are soundbars that can match it for length, but purely by design, the Sony lets you know immediately that it means business. Sony have both eyes firmly fixed on the ‘I want to make lots of noise, please’ camp with this one!

More on what this means for the Sony in the sound quality stakes soon, but first, let’s run through exactly what this beast is all about. Packing in two woofers and two tweeters, the Sony is capable of proper stereo sound from the one cabinet. Its unique design allows for the unit to be stood upright or on its side, with Sony having fitted an additional tweeter, activated by an inbuilt sensor, that kicks in dependant on which way it’s been sited, ensuring a balanced stereo image.

As well as being physically imposing, the XB7 has a rugged finish, clearly built to be taken wherever the party is! It’s fairly reminiscent of a PA speaker, with its chunky carry handles and matte black casework, but the unique LED lighting around the front edge marks it out as a more consumer-based product. These lights change colour with the beat of the music, a neat touch that again shows off the Sony’s party credentials.

Connectivity is provided through Bluetooth, Near-Field Communication (NFC), USB and a set of RCA sockets on the rear. A remote is provided but all of the functions can be accessed through the panel on the top of the speaker, too.

So, we’ve pretty much established who and what the XB7 is aimed at – people who want a big sound in a relatively portable (relatively!) setup. All of the touches that Sony have added point to the XB7 being a party animal, and none more so than

the ‘Extra Bass’ button that adorns the remote and top fascia. Pressing this gave very much expected results, taking playback from ‘banging’ to ‘crikey!’ levels in no time at all.

Listening to the eponymous full-length debut release from electronic duo, Weval, the Sony showed how it likes to get down. The wobbly basslines reverberated through the room, giving plenty of impact. You Made It (Part II) with its loping drum beat and warm synths sounds fantastic, and hitting the ‘Extra Bass’ button just increased the smiles on faces in the room.

Detail in the mids and treble frequencies were decent, too. Again, it’s fairly clear where Sony have laid out their stall with this one. It’s never going to be digging out every inch of detail in a track, microscopically analysing the music like the best hi-fi speakers, but that’s hardly its job. It plays music for people who want to rock out, preferably with a load of other people in the vicinity doing the same thing. There’s no ‘Extra Treble’ button after all!

If we do manage to see any more sunshine for the rest of this much-rumoured British summertime, then there are few speakers as capable as the GTK-XB7 of helping to enjoy it. It was capable of bringing a smile to the face of even the most hardened hi-fi enthusiast, particularly when finding an already bass-heavy track to abuse the ‘Extra Bass’ button with! Party animals, check this one out!

For a range of fantastic Bluetooth speakers, call or pop into your local store today.

To find out more about the Sony GTK-XB7, click here. 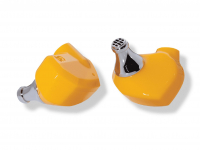 If you follow the surprisingly deep and weirdly aggressive, divisive but always impassioned realm of hi-fi headphones, one manufacturer seems to always come out tops…read more →