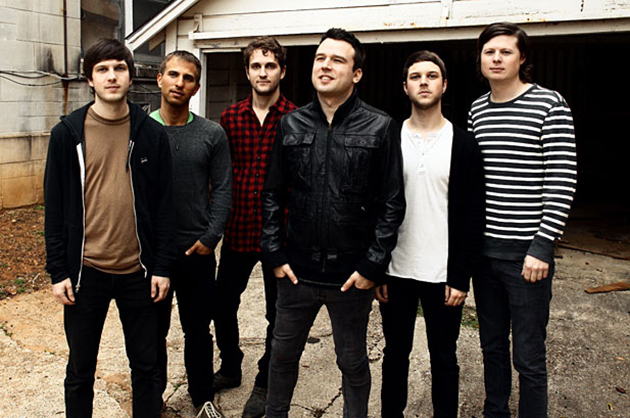 Forming a full 19 years ago, Say Anything have released their sixth, and final, album. With a rocky past and several line-up changes before this point, how will this posthumous LP stand up to their previous critically-acclaimed material?

Being a literal swan song for the band – the opening track, “The Band Fuel” sports an appropriate degree of lament and melancholy. Using dramatic drums and choral overtures as the backdrop to depressive vocals and minimalistic guitars, it really feels like a leaving note.

This is extremely thematic for the rest of of the album as well. At fourteen tracks long and with only two of them striking out over the ‘traditional’ three minute pop song length, the album can feel a little fragmented and disjointed. It doesn’t feel like it’s lurching from point to point however. Lead singer Max Bemis openly struggles with bipolar disorder and drug addiction; which has brought himself and the band to the brink multiple times. However, by using his own experiences as fuel for the lyrics, it keeps the tracks held together in album form, like a morose lynchpin.

“Daze” and “Pink Snot” are an example of the jump in theme from the album’s opening track. Whilst both more traditional ‘rocky’ (the former being fast and punky, the latter being more balladic) the lyrics are the real surprise here.

“Daze” is a rapid retelling of Bemis’ insomnia and the state of his mind (and home) during an attack, it’s fast, pacy and discordant to match his state of mind. “Pink Snot” is a deceptively cheery track – considering the subject matter. Its raw acoustic guitar could feature on a love song, one targeted to melt hearts, instead he opts for melting heroin on a spoon. The track weaves in the story of Max much preferring pills to needles and coils, how he eschews it, as he’s ‘the pill man’. It almost takes a second listen to realise exactly what he’s saying across these tracks.

“Ew Jersey”, sounding and even feeling lyrically a bit more ‘teen rock’ is a slight reprieve from the darker, albeit well-disguised subject matter. Its sparkly and shimmery guitar and catchy beat is more traditionally pop rock all round. Despite the band’s age, it still tells of their anxiety amidst their fame–’does anyone care who we are in this bar? Do the girls?’. 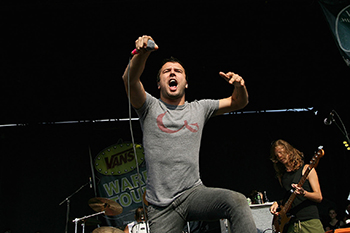 Delving further into this more introspective side of anxiety, “Mouthbreather” instead targets just one person instead and the boy of the story approaching her, ‘leaking pheromones’ and thinking of everything yet to come that evening. This slight rest comes to a jolting end however with “When I’m Acid”. Leaping back into more jerking guitars and shouted lyrics, the album at its halfway point starts to feel like a journey through Bemis’ mind. Not always running smoothly, but a full gamut of depression to more manic episodes. His lyrics jump from almost recklessly happy, confused (about drugs, his mind, his sexuality) and enmeshed in depression.

In a nine-page letter for fans about the band’s hiatus (polite term for break-up as we all know), one of Bemis’ most salient points about his reasons for ending the band was his recent struggles of coming out as bisexual. With a deeper listen to tracks like “Mouthbreather”, these fears and struggles take hold. With a far shallower listen, “Your Father” and “Send You Off” give a far more targeted voice to these internal strifes of Bemis’. These worries, in these guitar-driven, rocky tracks jump into a twisted and more warped keyboard-led “It’s A Process”.

The track feels tumultuous, and disjointed – in no bad way. With warped anger to it, it’s reminiscent of the earlier madness from band, Mindless Self Indulgence. The synth keys and chimes over some seriously heavy distortion and reverbed guitar make the feeling of losing someone you didn’t even know you wanted really come alive.

Before a climactic and frankly violent end to the album with “Sediment” comes the track that seems to illustrate Bemis’ coming out to his wife – “The Hardest”. Genuinely heartfelt and gentle, but tinged with the chaos of his own mind; a duet between Bemis’ and an uncredited female voice (it could be his wife, considering her own musical background).

On the surface, the album could easily be a mess. There’s no blindingly obvious theme on a skim of a listen, the album doesn’t feel appropriate for incorporation into a playlist this way. However, for a short, intense sit down. At around 35 minutes, it’s a window into a mind in pain, full of poetry and confusion and it bears listening to.