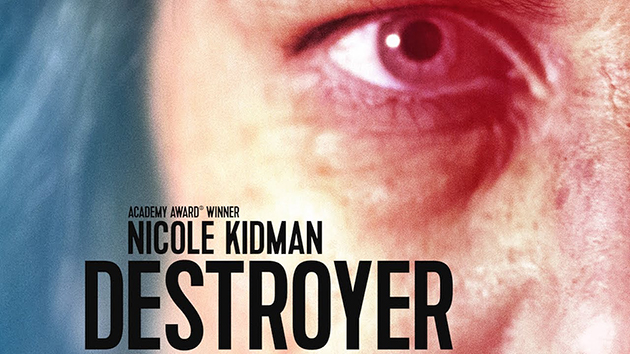 Having received a mysterious package from a past acquaintance, former undercover LAPD detective Erin Bell (Nicole Kidman) tries to track down a criminal gang leader (Toby Kebbell) from her past and bury her demons once and for all…

From the outset Destroyer makes no bones about it not being an easy watch. The film presents a bleak and uncompromising view of Los Angeles populated by characters with little or no redeeming features. This is not a film for the faint of heart and it’s all the better for it.

The narrative jumps between flashbacks (of the undercover operation) and the present-day Bell on the warpath. It’s engaging and well-balanced between the two time periods as both prove equally as compelling. The film grips you as it twists and turns with revelations that will keep you on your toes and likely deliver some shocks to even the most seasoned fans of the genre.

Much has been made of Nicole Kidman’s performance here and whilst her physical transformation for the role is certainly striking (she is almost unrecognisable) thankfully that’s the not the only reason for the hype. Her hard drinking, emotionally broken female detective is nothing short of superb and it’s this central performance that provides the beating heart of the film.

The set pieces are incredible, with the bank robberies being some of the most exciting committed to screen this side of Heat. The visceral ‘in-your-face’ visual style means Destroyer is not a film you will forget in a hurry and may yet prove to be a highlight of 2019.

There are a couple of minor problems though; Toby Kebbell’s villainous Silas feels a little underdeveloped and the sub plot revolving around Bell’s teenage daughter doesn’t really go anywhere but they are certainly minor issues with an otherwise excellent film that is director’s Karyn Kusama’s best work yet.