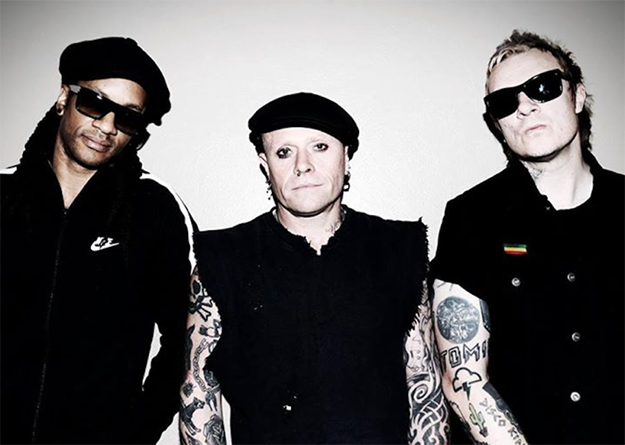 The Prodigy, from Braintree, Essex, are pretty much an English institution now. They’ve been doing this for 28 years, you know.

You’d think being still pretty high profile that their recent achievements in the field of science would’ve merited more universal praise in recent months, but their amazing advancements have pretty much gone unnoticed. Even before H.G. Wells published The Time Machine in 1895, time travel has been a subject of much fantasy, speculation, incredulation and general disbelief that it could ever be mastered. But that’s what these Essex techno ravers have done. They’ve mastered time travel. So, in keeping with ignoring this amazing breakthrough as the world of science has brazenly done, we will return to this subject later and discuss their new album first…

No Tourists (which could easily have been titled ‘(Take) No Prisoners’) has recently arrived as the troupes 7th album in their nearly 30-year existence. Opener, “Need Some 1” doesn’t gently set the scene, rather, it kicks down the doors and declares intention. There’s no mellowing as seventies child and near quinquagenarian Liam Howlett seemingly has zero grasping of the concept of lowering the pace as one grows older, and why should he?

“Light Up the Sky” harks back to 1994’s Music for The Jilted Generation and keeps the pace moving. “We Live Forever” seamlessly begins and if anything ups the pace. Beat heavy, bass heavy and vocally looped it’s strong if not exactly breaking new ground. But if you’ve loved the Prodigy at any point then there is plenty to admire so far. Title track “No Tourists” sounds cinematic and epic, ‘No tourists, No sights to see!’ is its mantra amongst heavy beats and siren-like synths with quiet dips and quickly building explosions back into the action. “Fight Fire with Fire” is aggressive, shouty and sweary, almost a rude interruption even amongst this rollercoaster ride so far presented. It is punky, ravey, techno, and harshly electronic and reminds me why The Prodigy managed to scare my then seven-year-old at V Festival back in ’97.

And the second half of the album continues in a similar vein. Derivative of past Prodigy glories maybe,  this album is also a great listen, uplifting even in that it puts a smile on your face. Detractors might say music has little value being quite devoid of originality, but it’s far from pointless floccinaucinihilipilification (copy, paste and Google!), it quite brazenly reminds us that music does not have to be saccharine soaked and so mellow that staying awake whilst listening becomes an achievement. The best music should engage and excite, and that’s what No Tourists does. “Champions of London” is inexplicably superb. God only knows what point it’s trying to make, but quite frankly, who cares, it’s ace. And the album has a strong closing run. “Boom Boom Tap” incorporates both nursery rhyme phrasing and blunt, caustic searing. Which is a pretty great mix. “Resonate” like much of the album sounds like the laughing gnome has swallowed a bag of narcotics and decided to relaunch his chart career. And “Give Me a Signal” closes out with bite and drama. It’s hard to describe tracks individually, nothing here outstays its welcome, it’s all meaty and beaty, fast and full on, and I highly recommend it.

So back to the ground-breaking science, the achievements in the field of time travel. The amazing solution is presented on a shiny silver disc and larger black plastic version is out there too. Technology in their heyday known respectively as CD or vinyl, later usurped briefly by downloading before streaming ruled the roost, the ten contained vital pieces of information works as well in any chosen delivery method. Use the format you choose, turn it up to ten and preferably employ a subwoofer at the same time, and bang, you’re back in 1996. No other time zones are yet available.