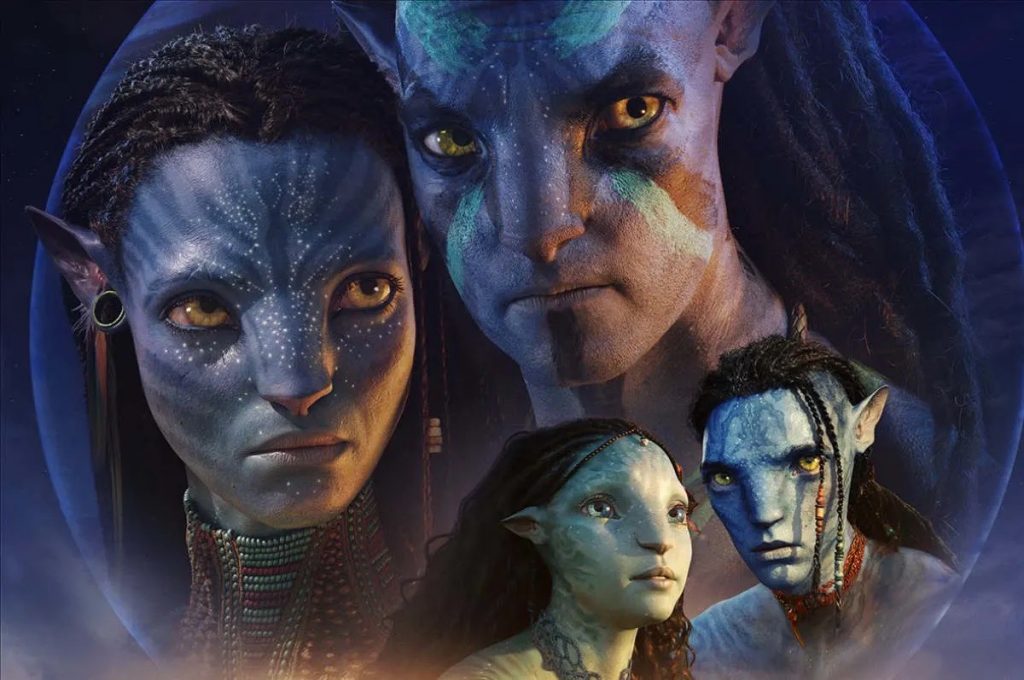 After more than a decade of peace on Pandora, Jake (Sam Worthington) and Neytiri (Zoe Saldaña) are living an ideal life with their new family. But when the ‘Sky People’ return with a vengeance, the Sully family must seek shelter in distant lands with a new water tribe.

(Warning: Mild spoilers ahead) To say that The Way of Water is a long time in the making, would be a titanic understatement. In the 13 years since the original Avatar, director James Cameron committed to no less than THREE more sequels, with a yet unnamed Avatar 3 already complete and a fourth partially filmed. At first it seems like a huge gamble on the studio’s part, yet when the original grossed 2.9 billion dollars worldwide, it appears to be a bet that will eventually pay off.

Upon their return, we learn the invading humans want the moon of Pandora itself as a base for a new colony away from their dying home world. Backed up with new technology and weapons, they set to work attempting to eradicate the native Na’vi people and their leader Jake Sully. After a year or so of guerrilla fighting, Jake realises he must leave the forests and head to the islands inhabited by the Metkayina people, a water tribe who are content to stay out of the larger global conflict.

Hot on their heels is the tenacious Colonel Quaritch (Stephen Lang) who, after dying in the first film, is newly resurrected in an avatar body. Along with his squad of blood-thirsty marines they capture Spyder (Jack Champion) in an attempt to have him lead them to Jake. Young Spyder was orphaned by the conflict as a toddler and has since grown up on Pandora, like a sort of alien Mowgli under the care of the Sully family. He’s one of two characters along with one of Jake’s children, Neteyam (Jamie Flatters), who explore what it’s like to be an outsider from both a human and Na’vi perspective.

After a somewhat disjointed first act, we’re introduced to the Metkayina people and their aquatic way of life. Jake and Neytiri seem to take a back seat and we focus instead on their children, Lo’ak (Britain Dalton), Tuk (Trinity Jo-Li), Kiri (Sigourney Weaver) and the aforementioned Neteyam. As the children adapt to their new surroundings, the visuals really level-up when we head underwater. There’s no doubt that the huge gap between films has allowed for some truly staggering leaps forward in CGI and you’ll spend a good portion of this film with your jaw hanging open in disbelief at what you’re seeing. Having seen it in IMAX 3D myself, I can say that you truly feel like you’re transported to Pandora, and even though 3D has trailed off in cinemas in the past few years, Cameron reaffirms his talent here in using the technology to maximum effect.

For all of the film’s impressive visuals and grand worldbuilding, the heart of the film is really about family (especially fathers and sons) There’s a sub-plot about a species of highly intelligent whale-like creatures called the Tulkun, which the humans are now focused on capturing and killing for a mysterious new resource, much to the anger of the Metkayina people.

Unfortunately this is where the film started to go off the rails for me. In the original Avatar, Cameron was clearly trying to make a larger point about protecting the forests/nature, wrapped up in a sort of space ‘Dances with Wolves/Pocahontas’ narrative. However I think that was done to better effect, coupled with Jake’s fish out of water/romance elements. The Way of Water however, which is clearly about protecting our oceans and the evils of whaling, is not quite as subtle, and all the rich visuals in the world don’t make up for story which quite frankly, had me checking my watch at the 2 hour mark. Even Quaritch’s return in avatar form never quite reaches the same level of menace as he did in the first film, his Terminator like ferocity fizzling out as his relationship with wild child Spyder grows more complicated.

Acting, cinematography, music and sound design are all top notch, but it never quite coalesced into a satisfying story overall for me, and at a run time of 3 hours and 12 mins, it feels flabby in places and leaves you wanting more in other areas. In particular Kiri’s story, who we learn was mysteriously born of Dr. Grace Augustine’s avatar body, and now seems to have some kind of extra-sensory connection to the Na’vi’s deity ‘Eywa’, allowing her to control certain ocean creatures. For an actor in her 70s, Weaver does an amazing job tapping into the mindset of a 14 year old via the magic of performance capture.

I think the real issue here is when filmmakers shoot sequels back to back, as there’s no time to gain perspective on a film’s reception/criticism before filming the next one. There’s no doubt that Cameron is a master filmmaker, however story and character elements that are clearly being set up for payoff in later instalments, leave the film you’re watching feeling vague and incomplete. A good sequel should still be a self contained film, but right from the start of The Way of Water Cameron mercilessly cleaves off side characters and settings from the previous film that you may have had some interest in knowing more about. The jungle setting of the first film is never revisited (how are they dealing with the threat there?) The human scientist characters who have made a life on an alien planet are barely given a passing thought, and new characters such as the tribe leaders of the water people, played by Cliff Curtis and Kate Winslet, are given very little to do and seem to fade into the background, occasionally popping up to scorn their offspring after repeated run-ins with the Sully children. I realise with an already bloated runtime, some story elements have to be left behind, but it’s frustrating nevertheless.

When the action arrives the film it can be exhilarating, and there are definite well-punctuated moments scattered throughout. However the final act of the film (which most are raving about) seemed to play out like a ‘greatest hits’ of all of Cameron’s previous outings. Set around a slow sinking of one of the whaling vessels and a drama surrounding the children, we see elements of Titanic, The Abyss and Aliens, all adding up to that feeling of “I’ve seen this all before”. There is sacrifice and heartache, yet it feels strangely unearned.

When you think about it, there isn’t much a primitive native population can do against an invading alien threat who can simply leave the planet, regroup and come back stronger than ever. So it’ll be interesting to see if future instalments can subvert expectations to avoid repetition. I’m sure Avatar: The Way of Water will do staggeringly well at the global box office and pave the way for more from the world of Pandora. But I can’t help but think that this one-time good idea has already been stretched to near franchise breaking limits.