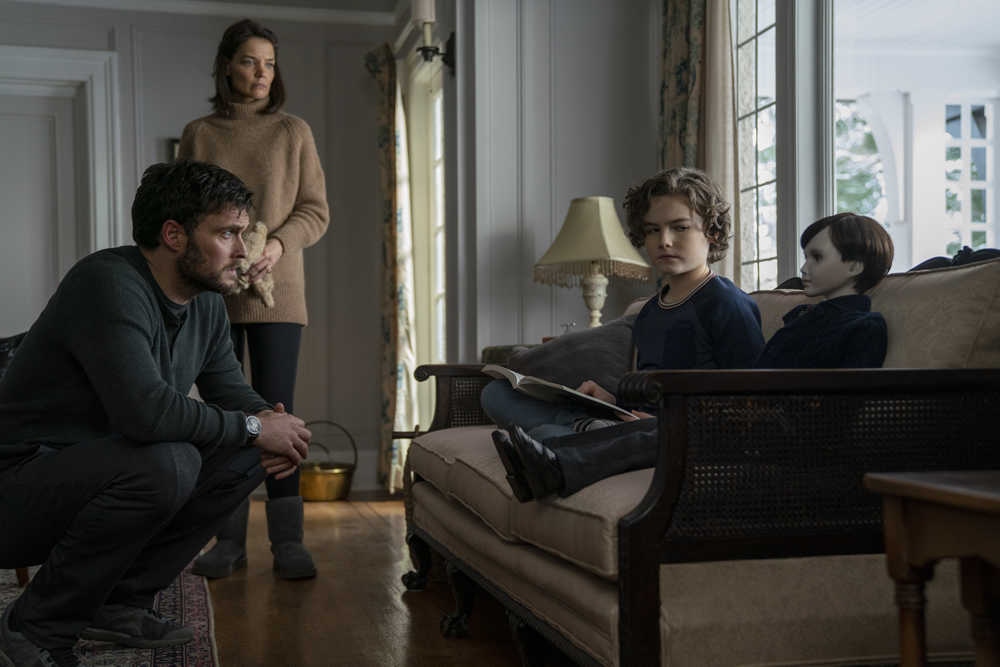 Following hot on the heels of the less than universally admired original film, ‘Brahms: The Boy II’ picks up a few months after the events of the original but we are with a new family this time round.

After witnessing his mother (Katie Holmes) being attacked in a violent burglary Jude (Christopher Convery) retreats on himself and becomes mute with shock. In an effort to get over the trauma the family decides to move into the country and ends up in the guest house of an old country estate that is home to events of the first film. Jude finds an antique doll buried in the woods and their rest and relaxation soon takes a darker turn.

Whilst the original film wasn’t exactly a shining beacon of quality it did at least have some interesting plot twists and turns that kept you guessing, that is if you can ignore the fact that they didn’t make a great deal of sense. Without spoiling too much, everything wasn’t quite as it seemed and there was more to the haunted doll than met the eye. It makes little sense then, that this sequel has decided to ignore the only interesting element from the original film and retcon the story back into the overdone and frankly uninteresting haunted doll territory.

It doesn’t help that the film rarely makes any sense, characters make ridiculous decisions and Jude’s parents need a firm talking to if they think that the time he spends with the creepy doll is remotely acceptable. Anything involving the supernatural already requires a pretty big suspension of belief so it’s important that the events surround those elements are remotely believable, you will struggle to believe that anyone is capable of making the decisions on display here.

The clichéd silly plot and premise might be tolerable if we had anything approaching a decent horror film on our hands but to be frank, we don’t. As seems par for the course in commercial horror cinema these days we are presented with little or no atmosphere and an over reliance on cheap jump scares that anyone out of their teenage years will see coming a mile off.

In fairness the cast fare a little better and for the most part the performances are the only improvement on the first film, Katie Holmes tries her best with the material and Christopher Convery as Jude is at times fairly creepy. Support comes from the ever dependable Ralph Ineson, who does enough even if his character feels like a lazy afterthought and his intentions are so heavily signposted he may as well be wearing a hat with the word villain on it.

With half decent performances being the only highlight there’s very little to redeem this film. Even for the most ardent horror fans, it’s hard to recommend. If you are a glutton for punishment that check it out but for everyone else. ‘Brahm’s: The Boy II’ rates high on the list of sequels that no one asked for and no one needed. Avoid.