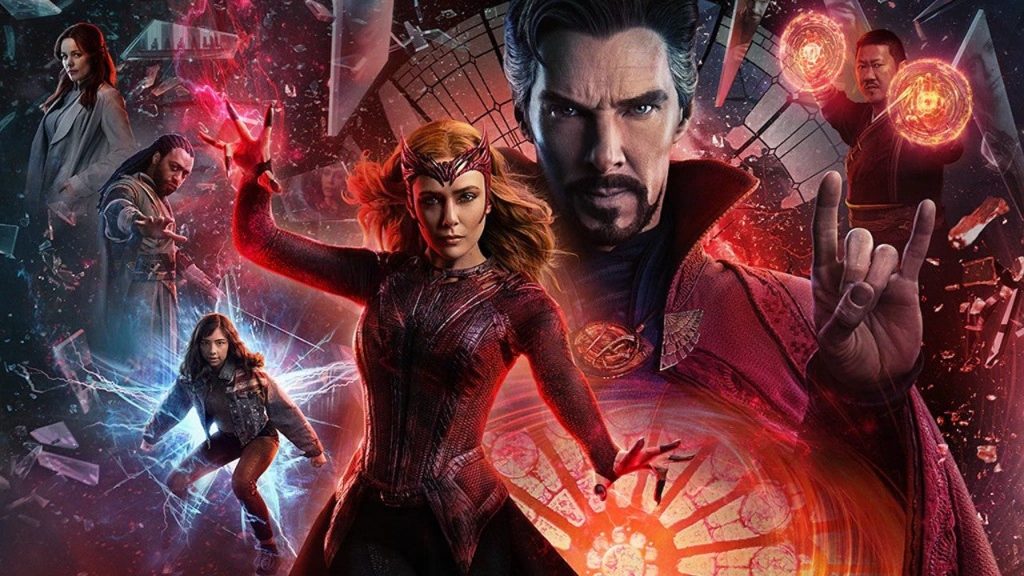 Doctor Stephen Strange returns for a long awaited Sam Raimi helmed sequel. Get ready to marvel at a thrilling trip through multiverse.

The Marvel multiverse has been around for a while now in cinema and TV with the first true introduction to it being in Sony’s Into the Spider-Verse and more recently with Spider-Man No Way Home. These films it gave us a great glimpse at what infinite possibilities could be achieved through this cinematic loophole. However, if you want to do some homework, watching Marvel’s recent What If! animated series on Disney+, does a great job of showing thrilling alternate realities, before diving into Multiverse of Madness.

Strange is settling back into ‘normal’ life after helping save the universe from Thanos and the events of Endgame. His powers are evolving and becoming stronger and he’s something of a celebrity… but is he happy? This question is asked of him throughout the film and has Strange pondering the cost of happiness.

In one of the early scenes we see him attend the wedding of his old flame Christine Palmer (Rachel McAdams) who gives a strong performance throughout. The main antagonist we quickly learn, is Wanda Maximoff, fresh from enslaving the entire town of Westview in her own reality altering TV show WandaVision. Initially sought after for help by Strange, we quickly learn that Wanda has been corrupted by the ‘Darkhold’, an evil spell book with the power to give Wanda what she desires.

Helmed by Sam Raimi, who’s returning to the Marvel universe after directing the original Spider-Man trilogy for Sony. As well as Benedict Cumberbatch returning as the title character, there are a couple of new additions, like Xochitl Gomez playing America Chavez, a multiverse hopping teenager, unable to control her powers. She makes the role her own with a lot of enthusiasm and a wit that’s a match for some of the other older ‘wiser’ characters. I see a bright future for her and her character has potential to be the catalyst for the direction Marvel is going in.

Olsen came out recently saying she doesn’t like watching her films back. However, she should be proud of her performance and really shines on both the scary and vulnerable ends of the acting spectrum. Her new persona ‘The Scarlett Witch’, is attempting  to steal America’s powers to search the multiverse for a reality where she can be with her ‘children’ (watch WandaVision to find out why that’s especially heartbreaking). Her character’s arc (and accent) have changed so much in the films we have seen from her, but is somewhat brought to a close here when, just like Strange, she must face the true cost of being happy and getting what she thinks she wants.

A good portion of the film sees Strange and America tracking down the ‘Book of Vishanti’… the Darkhold’s antithesis, which can help them defeat Wanda. There’s a lot to keep you amused during this time, but any filmgoer (especially a Marvel fan) will smell the ‘McGuffin’ subplot a mile off.

To offset this, Raimi’s unique style of filmmaking keeps the film driving forward at a terrifying pace. Raimi has always leaned toward horror being the director of the cult classic Evil Dead films, so there are points in this film which mirror certain aspects of his back catalog, with expertly crafted few jump scares and tense, yet campy horror. I think that Marvel is slowly learning to not restrict their more creative directors, although Raimi has only apparently watched two or three previous marvel films. I hope he comes back for more as his style is a welcome addition to the MCU, although at points they do push the 12A rating to the extreme (just wait for zombie Doctor Strange)

The film as a whole was in my eyes a success, but with some weaknesses. It went in directions that I did not expect. The score and visual effects were special enough but we didn’t have the physics bending (the previously seen ‘mirror universe’) that we have come to expect from Strange’s prior outings. Sadly, we also only get glimpses of alternate universes including a cartoon one and even a universe where you are paint??. It’s a shame then that we end up for the majority of the film on a fairly mundane alternate Earth.

There were aspects that I felt have been included as fan service, maybe too obviously. Most notably would be ‘The Illuminati’, a secret collection of alternate superheroes from a different universe (in which, THEY defeated Thanos). Some of the identities of these alternate sort of ‘Avengers’ are shocking and exciting, setting up some great future directions for Marvel. Although their time in the film is treated as a bit of an afterthought, it did give us a Fantastic *wink* glimpse at what we could be seeing in the not too distant future *wink wink*.