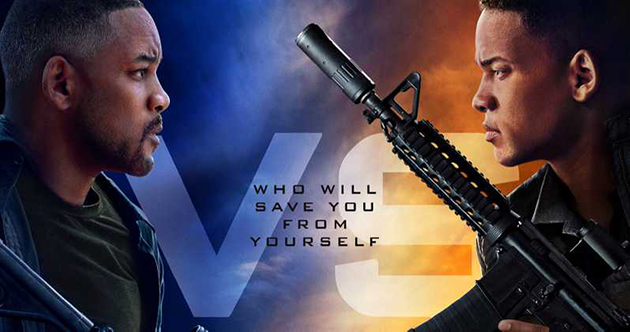 Retired hitman Henry Brogan (Will Smith) becomes the target of a shadowy organisation who have sent out the only operative who can kill him: a younger clone of himself.

I am kind of fascinated by Gemini Man. It’s directed by Ang Lee, a filmmaker I greatly admire for the likes of Crouching Tiger, Hidden Dragon and Life of Pi, and whose weird 2003 Hulk film is one of my guilty pleasures. Its script, however, is credited to David Benniof, fresh from Game of Thrones Season 8 infamy, and Darren Lemke, who actually didn’t have anything to do with the final script at all. According to The Hollywood Reporter, Lemke sold the Gemini Man spec script in 1997 and it had entered development hell for years, passing by actors like Nicolas Cage and Mel Gibson, the movie going unmade due to lacking technology. Lemke only gained credit earlier this year because of WGA arbitration. By all accounts, this movie should not exist, and yet, miraculously, it does.

Adding to its curiosity, Lee also made the firm decision to shoot Gemini Man in eye-watering 120fps 4K 3D – for anyone wondering, films are traditionally shot in 24fps and so anything higher looks oddly fluid. Those who have spoken to our colleagues in store about TVs may have heard us mention ‘motion smoothing’ technology, an example being LG’s ‘TruMotion’ setting. While that is a post-process that can be switched off (and is something that many filmmakers, most notably Christopher McQuarrie, Brad Bird and Tom Cruise, absolutely loathe), it is inescapable with the natively ‘smoothed’ Gemini Man. Yet, amazingly, not a single theatre in America will be playing the film in 120fps 4K 3D. 14 of them are playing it in 2K, and that’s as close as it gets. As for us in the UK, only Odeon cinemas outfitted with Dolby Cinema will be showing the film in 120fps 2K 3D. I watched the film at Vue, meaning my screening was the more commonly found 60fps 2K 3D, and I cannot imagine how the film must look at double the frame rate I saw it in. Yes, it undoubtedly helps the 3D, particularly when it comes to eye-strain. I genuinely can’t recall a more pleasurable 3D experience. That said, it makes the rest of the film look unusual, skirting the line between that raw behind the scenes footage look and the polar opposite fake look of a video game.

Despite the high frame rate making everything look fake and weird, the action scenes can often be genuinely thrilling. The way in which Lee moves a 3D camera is a genuine triumph, managing to cut together action that can be beautifully riveting and fast-paced but never exhausting to the eye. This is some of the best looking 3D action I’ve witnessed, the movement actually being helped by that HFR strangeness to make it all so much more palatable than lesser 3D movies. Even when it looks like obvious CG, the way Lee uses the 3D stage to play with different heights and layers is great, made particularly evident in a bike chase scene halfway through the film. That same scene, however, hilariously ends with young Will Smith deciding that the best way to kill older Will Smith is not by simply fighting or shooting him, oh no… that scene ends with bike-fu. It is played totally straight and is one of the few moments that the schlocky potential of Gemini Man is met. The rest, unfortunately, is utterly dreadful.

Make no mistake, this script (whoever’s it actually is) is absolutely appalling and doesn’t go anywhere near the dopey fun it could have been. Upon finding out that clones are a thing, Smith’s character Henry ponders “they could have cloned more doctors. More scientists. Why not clone Nelson Mandela?” to which his partner Danny (Mary Elizabeth Winstead) responds “Nelson Mandela couldn’t kill a man on a moving train.” With lines like that, this film could not afford to fall into the boring and generic spy drabness it so often falls into. As a result, it is neither fun to laugh at nor laugh with consistently. It is sometimes the former, but never the latter, as it seems to be confused over how to approach the premise. It makes the inherent flaw clear from the start: this can’t be both a science fiction about the state of human nature and a high-concept hitman thriller at the same time.

Equally as important to extract something from this premise is the technology required to execute it. The CGI used on Will Smith looked incredible in the trailers, and when I heard it was not digital de-aging, but rather an entirely CGI model, I was stunned. It seems they hand-picked the best moments for the trailers, however, as in the full movie it is frequently off-putting. The closing moments of the film feature the creation in broad daylight, and it looks astonishingly bad. Expect to find this CG Fresh Prince buying property in the Uncanny Valley next to Leia and Tarkin from Rogue One. When the film started, I heard someone next to me say to their partner “it’s Will Smith, his films are always good”. It made me realise how much he’s still in public favour, despite numerous critical and commercial flops in recent years. Bright, After Earth, Collateral Beauty, Suicide Squad and now this all account towards an actor who is clearly still making his own decisions, just not particularly great ones. I await to see whether his pigeon-themed spy animation Spies in Disguise redeems him later this year.

Ultimately for now though, Gemini Man is a clone so poorly grown that it makes its forebears Star Trek Nemesis, The Island and Face/Off look like high art. Perhaps somewhere in here lies the DNA for the more fun, more outrageous and more self-aware thriller that this so clearly should have been.