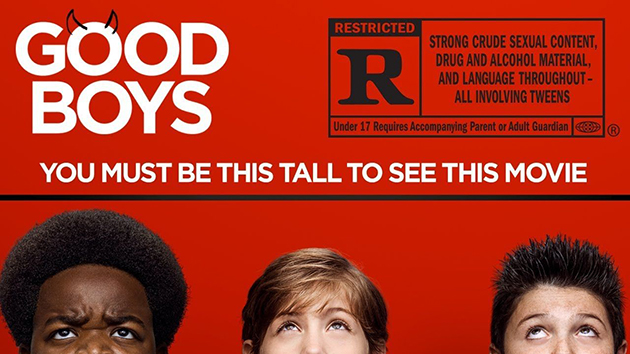 Max (Jacob Tremblay), Lucas (Keith L. Williams), and Thor (Brady Noon–not the God of Thunder) are three best friends who have been invited to their first ‘kissing party’. Totally clueless on how to kiss a girl, the trio decide to steal Max’s father’s drone to spy on the girl and her boyfriend next door. But when the drone is lost, the boys must find a way to get a new one before Max’s dad gets home, while still figuring out how they can avoid embarrassment and eventually seal their first kiss…

Seth Rogan and Evan Goldberg’s Point Grey Pictures has become a substantial production house as of late. Keeping a relatively consistent stream of releases since 2011’s 50/50, Point Grey has recently expanded very successfully into TV with AMC’s Preacher and Amazon’s The Boys, the latter of which becoming Amazon’s most viewed original series. As with last year’s wonderful surprise Blockers, Rogan and Goldberg return their cinematic sights to the struggles of developing youth, albeit this time focused on a younger group of sailor-mouthed sixth-graders facing the age-old dilemma of coolness and girls.

Unfortunately, Good Boys doesn’t quite reach Blockers’ heights. It’s by no means bad; it will provide a pretty steady helping of those quick nasal laughs, the occasional belly chuckle and at times make you a little nostalgic for the period in life that it portrays. I can see this being one of those movies I would have lapped up as a 12 year old or very early teen, and I’m sure that demographic will have fun watching Max, Lucas and Thor try, fail and come to learn a few key life lessons along the way. It’s all just a bit workmanlike from director Gene Stupnitsky, whom after a career writing for TV makes his directorial debut here, and it shows a little. There’s a degree of clunkiness to some of the execution, the odd joke that has its timing just a little off or the occasional moment that holds either a bit too long or goes a bit too quickly. This isn’t helped by a bit of an autopilot script from Stupnitsky and Lee Eisenberg, where the events unfold in a suitably comedic fashion but never really develop intelligently or with much surprise: everything progresses suitably in order to get this story and its characters from the start to the desired ending, as securely as it is obligatory. 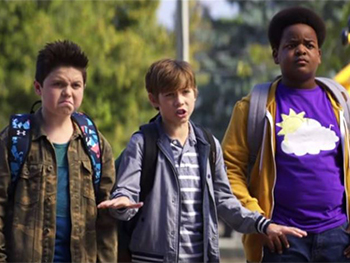 Not that there isn’t surprises. An undeniable highlight is Keith L. Williams’ Lucas, who portrays a type of character rarely ever seen in this type of film, let alone in a leading role. Lucas is defined by being honest to a fault, and being proud of it. Whereas his two friends are inclined to tell the odd porky to get by, Lucas believes that telling the truth at all times will ultimately result in a better conclusion. His candid honesty makes for some of the funniest sequences in Good Boys, and Williams makes Lucas consistently endearing (and adorably funny) for being so, never falling into becoming a plot irritation, as this type of character is often portrayed as when contrasted with their rebellious friends. Brady Noon’s Thor has some fun one-liners also, and for anyone who grew up in the late nineties/early noughties like myself, is a dead-ringer for a T.J. Detweiler if they were to ever make a live-action Recess movie (get on that one if you can, Point Grey!).

Jacob Tremblay, who leads the trio as Max, has become a prolific child actor since his breakout role in 2015’s Room, going on to be equally brilliant in 2017’s Wonder and having a starring role in The Predator the following year. I’m not too sure if it’s how he has been directed or how his character is written, but he is just only fine enough here, and rarely does he elicit that charming warmth he has proven so capable of at such a young age. He is perfectly fit for in the role, but it’s hard not to imagine that had Good Boys swung more assertively for the comedy fences, as well as delivered more resonant emotional punches, Tremblay could have had more to work with as the lead. Still, he completes the trio nicely, only much like the movie not as confidently as could be expected.

At best, Good Boys is a consistently entertaining, brisk comedy that in its finer moments genuinely captures that feeling of the ‘tween’ years, where one’s uncertainty with things like romance and relationships is supported by close, seemingly eternal friendships. At worst, it plays like a bit of a rough-cut of a movie, one that feels more like a really nicely made play by kids the same age as the lead actors, but a bit lacklustre for a theatrical comedy. I hope it finds life with the younger generation and they get some good sleepover entertainment out of it. Only, for them and us, perhaps that’s where it will stay.