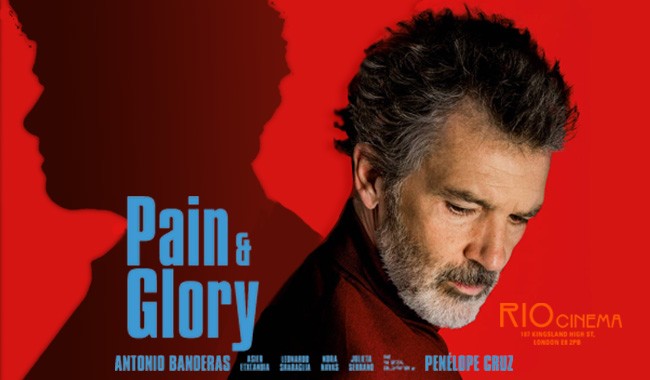 After a long time away from his craft, film director Salvador Mallo (Antonio Banderas) has been suffering both physically and mentally, with nothing but time to reflect on his past. When one of his classics is selected for a restoration and re-release, he must face one of his estranged actors (Asier Etxeandia) and prepare for a coming screening and Q&A.

The above synopsis is only the start of the tale that writer/director Pedro Almodóvar is presenting in his latest work. In writing this review, I am desperate to elaborate on each evolution of the film’s plot, but it is important for me to remember that such a description is all I went into the film knowing, and watching the story unfold was a joy I will not spoil. This is because Pain and Glory, the acclaimed Spanish director’s latest work, is nothing short of an unmitigated triumph. I find it difficult to recall a film so sombre and yet so intimately hopeful at the same time. It dances with heady themes such as regret, depression, meaninglessness and substance-abuse, yet maintains a deft touch on each aspect with a telling personal awareness.

What sets Pain and Glory apart is its uniqueness of where Almodóvar chooses to tell the tale of Salvador Mallo. A standard in this type of story is to see the central character struggle somewhat repetitiously until, eventually, we get the hint that things may improve for them in the end. A somewhat unconventional comparison totally, but I am reminded of James Franco’s 2017 adaptation The Disaster Artist. It shares some narrative similarities in following a filmmaker (a surprisingly rare story in cinema all things considered) struggling creatively, but even though that film is a dramatic comedy, we only really get a hint that things will improve for Franco’s character Tommy in the film’s end. While we do watch Salvador struggle through his titular pain and glory, what made this film so surprisingly endearing to me is it is the first instance I can recall where instead we exclusively watch the steps towards our lead’s recovery. His long creative and mental struggle is implied early on, and what unfolds is each inciting episode that helps a once good man recover, finding his way back to happiness and fulfilment. And so, despite themes of difficulty and struggle, Almodóvar keeps everything in expert balance, creating a film that pulls you in to Salvador’s journey with sympathetic hope. It feels like getting a glimpse into the movie after the movie; a perfect atmosphere for a story about a director who has long left his passion for filmmaking behind. Almodóvar often explores the fluidity of identity in his films, and while his common element of ‘performance’ is still made bare here in the film’s world of movies, directors and actors, Pain and Glory is intriguing in how it argues that perhaps, for some, a clear and defined form of creative identity is just as important for emotional stability. 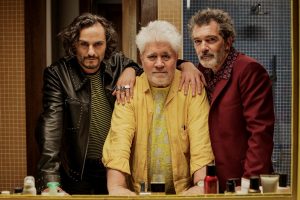 Anyone familiar with Almodóvar’s work will be well tuned with the director’s penchant for colour, from the multi-faceted stark reds of Volver (2006) to the cool blue and grey steeliness of The Skin I Live In (2011), and his latest is no exception. From white cave walls that allude to the canvas of the cinema screen that inspired Salvador as a child, to the furniture in his apartment that brims with strong greens, reds, browns and blues drowned out by dark shadows cast by keeping the curtains shut… the colour of Pain and Glory is a perfect example of how this often overlooked aspect of cinema can be so valuable in assisting the story without ever saying a word. Combined with stunning framing, making paintings of some shots, and simple but effective camerawork, this is one of the most striking films I have seen in a while. Even an early animated sequence depicting Salvador’s many ailments moves fluidly and dynamically, making an entertaining sequence out of common medical scans. It all aids in the atmosphere I mentioned earlier, preventing the film from falling into gloomy melancholy and preserving its grounded bittersweet tone.

As the plot flashes between the present-day Salvador and his memories of childhood, the film is bolstered by consistently fantastic performances. Antonio Banderas brims with a charm addled by a sad vulnerability that emanates from his eyes, vocal tones and body language; it is a performance that made the subtitles an accompaniment at times, rather than a necessity, his emotional range being universally real. It is the most exposed I have seen him, an actor often in positions of control falling effortlessly into a role defined by uncertainty and aimlessness, yet still with the essential flashes of conviction. Asier Etxeandia’s Alberto Crespo, Salvador’s estranged actor, is a mesmerising presence in support, as is Penelope Cruz as Salvador’s memory of his struggling mother Jacinta. Building towards a surprising reveal at the end of the film, the way Almodóvar ties these timelines and characters together puts an immensely satisfying finish on the picture of who Salvador is, and on the film as a whole.

A delight from start to finish, Pain and Glory is challenging, tranquil, touchingly personal and one of my favourite films of the year.