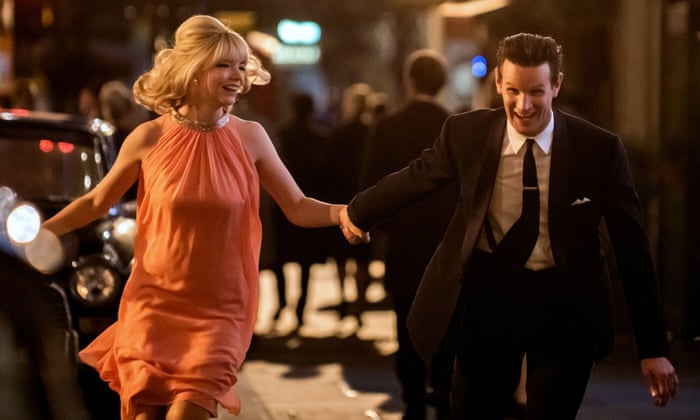 Edgar Wright is most commonly known for his excellent comedic films such as the the “Cornetto Trilogy” consisting of Shaun of the Dead, Hot Fuzz and At Worlds End. These have gained critical praise and cult status. So for him to venture his way into the physiological/horror category was intriguing to say the least. So I had to go and investigate Last Night in Soho on the big screen.

The film follows Ellie (Thomasin McKenzie) a wide eyed fashion student moving from rural Cornwall to Soho, wanting to become a designer like her late mother. The struggles of university and especially fitting in with her somewhat cliché boisterous housemates don’t help matters. Having to move out she gets a new issue as now when she sleeps she appears and walks around in 1960’s London. Where initially this is paradise for her, however, it’s not all it seems!

This vibrant new setting really shows off Wright’s command of colour and more subtly his control of music. Films of his like Baby Driver and Scott Pilgrim have really shown how well you can influence music and sound effects into a film. Last Night in Soho doesn’t heavily rely on this but it’s there in the background. It feels a more mature film because of this which is a relief as I think it could distract if relied upon too heavily.

Appearing in London in the 60’s introduces Ellie to Sandie brought to life by Anya Taylor-Joy, who’s strength and charisma really flesh out her role as the initial wannabe star. She is guided by the dark and somewhat sleazy Jack portrayed by Matt Smith. One of the highlights of this film is Anya singing a downtempo version of Downtown by Petula Clark with ominous tones which set up the darker direction the film now switches to. The music plays a key part of this film, it’s more subtle than in other films of his but the beauty of it is that it helps reinforce scenes or aspects of scenes to keep them enticing.

There is great talent in the cinematography for this film as it dances between eras (quite literally), especially when Matt Smith’s character is dancing with Anya but it flows to Thomasin mid dance move, this scene shows off some truly spectacular Texas switches! This is the tip of the iceberg of clever tricks and just downright great steady cam footage that even during a recent interview some of the crew didn’t know was possible to achieve!

Visually this film is a work of art not only in the sets and aesthetics but in the ways it is shot which we come to expect from Edgar. It is even more of a testament as it was filmed predominantly throughout lockdown. There are some dark twists which have some foreshadowing early on, but Edgar is clever enough for these to be disguised and appear naturally and somewhat shockingly. The film near the climax does get a bit more CG but these aspects I believe offer a look of what a horror would appear in a dream state. As such they don’t detract from the film’s pace and feel.

This is definitely, in my eyes at least, one of the best films of the year thus far. That’s not to say it’s perfect there certain aspects such as the housemates who are just there and only briefly aid the plot, with little depth or development. Despite this, there are so many aspects that make this a film to watch but I believe the cast as a combination with Edgar’s visions really bring it to life. Each time a star is on screen you get captivated by them and when the story spirals you do genuinely feel empathy for them. There are even some unexpected twists and turns, which is rare now in films to experience blind. If you can go and see this in the cinema definitely do, as that is where it’s most justified.