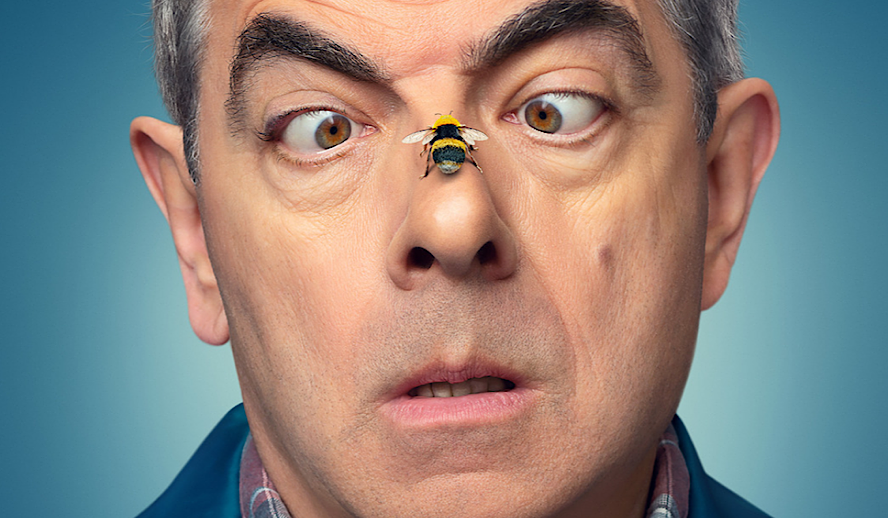 Made by Netflix, you can expect crazy production values that most free broadcasters could never expect to equal. But does this mean that one of Britain’s most beloved comics is able to shine, or will it simply be about spectacle. To touch back on Mr Bean, there seems to be a bit of a ‘Mandela effect’ surrounding the show. There are only fifteen episodes making up the one season it ran for. However, there seems to be a consensus that it ran for much longer and with several seasons.

This could be attributed to the sheer variety of situations he found himself in, or simply time warping the collective perception. Nevertheless, it’s a touchstone of nineties TV and a recognisable icon. As such, Man Vs Bee has a big shadow to strike out of, with Atkinson playing hapless father/housesitter, Trevor, as he takes on his first job sitting for an insanely decadent tech-filled mansion and looking after the needy dog of the rich couple.

The hilarity is of course helped by the obvious foil to Trevor, a singular bumblebee that appears to be devilishly clever/devious. It bears noting that the posh couple’s dog ALSO hampers Trevor’s simple task of looking after the home, but with considerably less planning than the bee seems to be curiously capable of.

Atkinson manages to apply his exceptional physical comedy chops to Trevor in his well-meaning but bumbling and sometimes outright destructive way. Often leaning into the more silent or mumbly side of Mr Bean whilst he’s…well, destroying the house he’s supposedly looking after. However, he also manages to switch straight over into loving, well-meaning and still bumbling dad whilst he talks to his daughter and ex-wife.

Unlike Mr Bean however, Man Vs Bee DOES have an overarching story for the nine mini-episodes that it consists of. With its short running time per episode (10-20 minutes, give or take) it’s easy to either drop in and out of, if you want something kid-friendly to keep them entertained for a short period.

The soundtrack is also perfect. Lorne Balfe may be used for more…erm, dramatic pieces, having composed for the likes of Terminator Genisys, but still shines here, capturing the moods of sadness, chaos, confusion, and stillness.

The show overall is a comforting delight. For those who have grown up with Mr Bean, you’ll find happy familiarity here, or something new and amusing if you haven’t. Arguably perfect viewing for the family, with the overt gags for the kids with a simple and effective storyline, and plenty of more subtle adult jokes and micro-acting from Rowan Atkinson for grown-ups. Once again showing us all how he’s a master of his craft.

It never quite measures up to the legacy of Mr Bean, but that was always going to be a tall order.