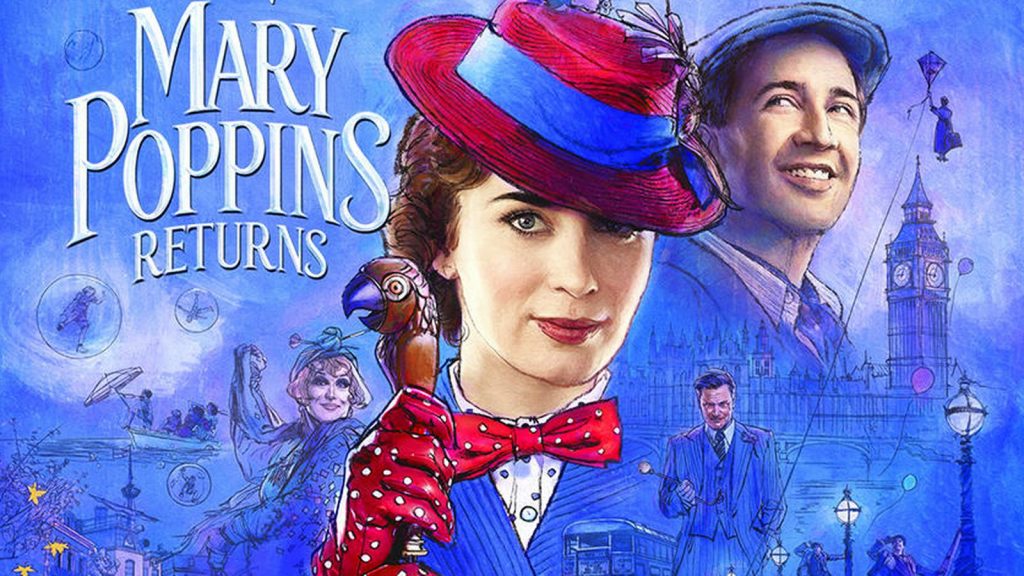 Set around 25 years after the events of the original we pick up with the Banks children, and now Michael Banks (Ben Whishaw) has children of his own.

All is not well for the Banks family though and when they end up in more than a spot of financial bother the time seems ripe for the return of super nanny Mary Poppins (Emily Blunt).

Mary Poppins, it’s fair to say, is one of the most beloved Disney films of all time and certainly a standout performance in a glittering career for Julie Andrews who made the title role entirely her own. It’s therefore a brave move on Emily Blunt’s part to try and fill those shoes and put her own stamp on the character. Blunt’s performance is indeed one of the highlights of the film. She channels just enough of Andrew’s persona to make her feel like Mary Poppins, but with a slight twist in voice and her own mannerisms she delivers a performance worthy of the character’s reputation. Hamilton’s very own Lin-Manuel Miranda also appears here and gives a thoroughly decent turn as Jack (a former apprentice of Dick Van Dyke’s character in the original).

Strong performances aside the film raises one big question, when is a remake not a remake?  Apparently when Disney decides to label it a sequel, the film struggles to exist on its own merits and although there are some differences in the story there just too many similarities to really call this a sequel. The set pieces are great (as one might expect) but they are all pretty much re-workings of the original song and dance numbers. The chimney sweep song for example is re-hashed but on ground level, the bizarre tea time visit where everyone is floating is changed slightly and everyone is upside down, the list goes on and on, there isn’t really anything new happening. At risk of bucking the trend with all the love this film has got it feels nothing short of lazy.

All this could be forgiven if the songs delivered but frankly they don’t, the musical numbers here all have familiar motifs and sound ever so similar to the songs from the original film. Its all very clever but comes at the expense of any of them being memorable, say what you like about the quality of The Greatest Showman as a film but there is little doubt the songs are catchy as hell.

Its not all bad news though, the film looks great and the technological advancements since the 1960s have been put to good use here, the mix of live action and animation pops right off the screen and the film certainly retains the look and feel of the original. Mary Poppins Returns has clearly been a labour of love for everyone involved and that’s genuinely nice to see.

It’s this reverence though that ultimately hinders the film, you may well be left with a feeling of why bother watching this when you can watch the original instead, which is a shame.