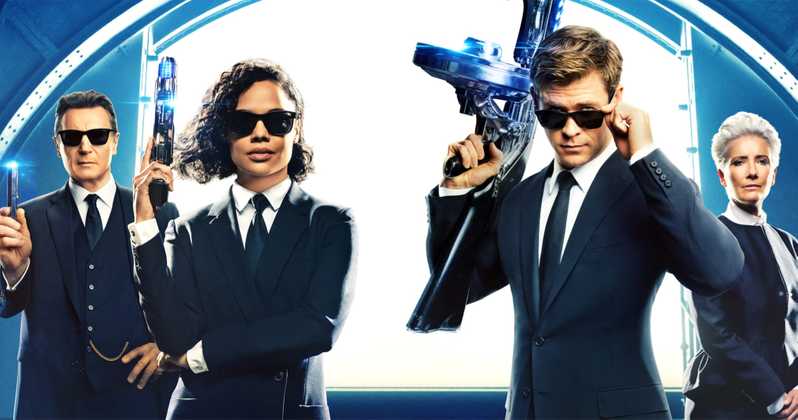 Picking up many years after the events of the original trilogy we are introduced to Agent H (Chris Hemsworth) and rookie Agent M (Tessa Thompson) who, on their first assignment, discover that an evil alien force has returned and the MiB themselves may be compromised.

In supermarkets, bars and around water coolers the world over, it’s been impossible to avoid the chat about people desperately wanting a fourth Men in Black film. Ok, well maybe that isn’t the case, but regardless the Hollywood ‘powers that be’ have given us one anyway.

Chris Hemsworth and Tessa Thompson have proven chemistry together so even the most cynical audience members could hold some hope that if the rest of the film fell down, the undoubted charm of the leads would carry it through. Tessa Thompson certainly delivers but the same can’t be said for Hemsworth, he is a gifted comic actor but it feels like he is on autopilot here, there is still a spark between the leads but it doesn’t hold a candle to their previous work together. Look out though for a scene stealing turn from the voice of Kumail Nanjiani who is hands down the best thing about the movie.

The story is fairly problematic too, it’s not that it’s bad, it just so very predictable. It isn’t really a stretch to know what the plot twists will be from the trailer alone. The events laid out here feel like a ‘paint by numbers’ blockbuster story that you’ve seen so many times before that it almost makes the film redundant before the opening credits roll. In fact you’d be forgiven for thinking that you were actually being nueralized all the way through as there is so little that is memorable here.

More of these faults might be forgivable if the film delivered on spectacle, the series is known for its distinctive aliens and tech design and whilst that is present and correct here, the CGI just isn’t up to scratch. If the filmmakers are trying to emulate the 1996 original then they aren’t far off but this 2019 version features lifeless waxy creations that are badly lit and in all honesty feel part finished, it’s not good enough.

All of this isn’t to say that MiB International is necessarily a terrible film, it’s the very definition of a mediocre one and sometimes that’s worse.