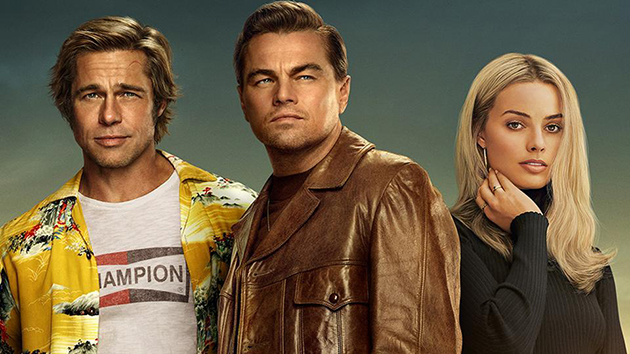 Once Upon A Time In Hollywood highlights the highs and lows of Hollywood life in 1969, an end of an era for both Hollywood and the hippy dream. It chronicles these events through three characters whose stories are entwined in a web of fact and fiction.

My first piece of advice would be to watch this in 35mm if you can. This is how the film is intended it to be seen and you can use your own favourite vinyl vs CD analogy to imagine the differences. DiCaprio’s portrayal of Rick Dalton, a middle aged actor coming to terms with the fact that his glory days are behind him is brilliant. The way in which his flawed but not unlikable character battles with internal despair and addiction has a very realistic resonance to them. Throughout he’s humorous and heartwarming, and DeCaprio shines when Rick Dalton is acting on set.

Brad Pitt plays Cliff Booth who may be the back up stunt man for Dalton, but in many ways he steals the show. He’s an enigma, and you quickly learn that there is a lot more to Cliff than meets the eye. The chemistry of the DiCaprio/ Pitt camaraderie is a very humorous dynamic. The film centres around the duo’s struggle in their journey to find work in a changing industry that is leaving them behind. Both characters are multi layered, which makes for compelling viewing.

Margot Robbie’s Sharon Tate is an immaculate tribute, right down to her use of Tate’s own earrings. While Tarantino worked independently of the Tate estate, his portrayal is one of the few to be endorsed by Sharon’s younger sister Debra. He has said he only ever had one choice for the role. Robbie has conviction, and her every movement is sublime and inspired. Tate and her husband Roman Polinski are Dalton’s new neighbours and in contrast, symbols of the rising stars of the new Hollywood. There is a particularly touching scene where Tate visits a cinema to watch one of her own films, and under the anonymity of the darkened room is thrilled to enjoy first hand the audience’s reactions to her performance. This reminiscent motif is new ground for Tarantino.

There’s a range of wonderful celebrity parodies and Tarantino regular cameos that are a pleasure to watch, of particular note being Mike Moh’s Bruce Lee. The colourful cinematography is a visual delight, a beautiful but subtle immersion that is a seamless backdrop for the characters. The sound design guides the audience through the context of the events through the radio spots, car engines and, as ever, excellent choice of soundtrack. You can’t fault the filmmaking. 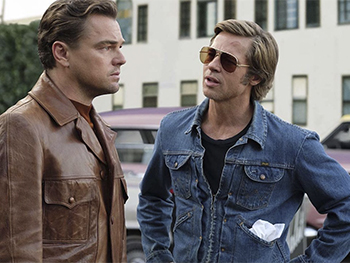 This film is not for everyone though. While the average Tarantino nut will no doubt enjoy it, the average movie goer may find the narrative a little slow and lacking in action. The script is filled with typical Tarantino banter, but it doesn’t really have the classic quotable lines that you’ll find in his other films. His 9th film is definitely a more mature and personal approach to film making, and his clever treatment of the sensitive historical context will defy your expectations.

You leave the cinema thinking that this is a version of the story that should have been told a long time ago, a representation that needed to be made that strips away the media circus, romanticism and glamorization surrounding the events. This is done whilst making an impassioned tribute to the lost world of the 1960s film industry, a place most viewers will never know. Bravo, Tarantino!