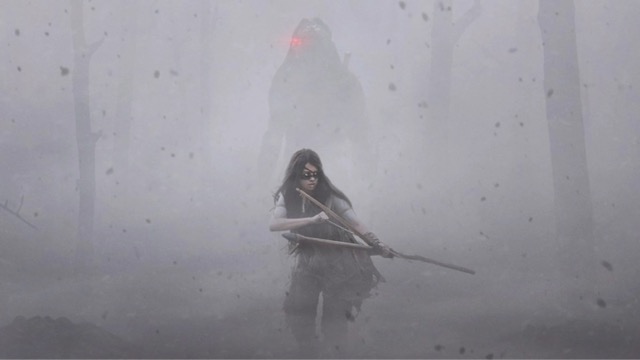 There are some movie franchises that start strong and end up falling off a cliff through the drive to make money but this often dilutes the original stories. Examples of this are Jaws, Jurassic Park and the Transformers series. So can Prey hunt down greater critical success?

The 1987 film Predator kick started a wider world that after the second film gradually got more modernised and it lost that original spark (Except maybe for Predators which did bring back the tension). So when it was announced that a new film was to be released in this franchise, it was met with much trepidation. Although this year we have seen the likes of Top Gun: Maverick, prove that a classic can be explored further without ruining the original.

Prey is unique in the predator franchise as it is set in the great northern plains of America in 1719, as such is a prequel to the previous four films. Don’t let it being in the past put you off, this felt like a breath of fresh air, no automatic weapons or secret labs (looking at you “The Predator”)

The main plot follows a young Comanche Indian girl called Naru played by Amber Midthunder, an ambitious young hunter desperate to prove herself as a skilled hunter especially to her brother, Taabe portrayed by Dakota Beavers. In order to win his and the tribes approval she must hunt something that hunts her…

Director Dan Trachtenberg expertly crafts this film, being no stranger to tight, claustrophobic thrillers. His 2016 film, 13 Cloverfield Lane starring Mary Elizabeth Winstead as another strong female lead thrown into extraordinary sci-fi circumstances was a great watch. Being much quicker paced than his previous outing, Prey’s character development sometimes suffers a little and dialogue can seem clunky. But again, we only have 90 minutes to get a lot in here.

The cast is made up of ‘unknowns’, however everyone does a great job. Not having a major star attached to the film helps you suspend your disbelief even further. Although I’m sure Amber Midthunder is poised to become a huge star in her own right, giving an honest, yet subtle performance (no damsel in distress here!)

The film was shot in Canada and the scenery was refreshingly free of CGI, it reminded me of certain scenes in the Lord of The Rings trilogy. Great sweeping shots along a mountain ridge through to tight shots in a wheat field. This gives the film a great sense of scale and depth to each shot, the lack of a modern environment I believe aids this. Makes each situation tense as the characters can’t simply hide in a kitchen or a hotel room, giving a sense of exposure and vulnerability.

There are a couple CGI driven moments that I found to be a bit underwhelming, but I’m not sure where you would find a tame grizzly bear to drench in blood and chase after the main cast. CGI aside, the predator itself is a suit rather than a person in a motion capture suit. By being a practical effect it really brings the character to life and gives the actors (and especially Amber) someone or something to play off. Again grounding the film which as a viewer makes the film so much more enthralling to watch.

It’s only 90 minutes long, which in modern cinema is very abrupt indeed. This shorter runtime keeps the action and tension concise, which is exactly what you want in a monster hunting film set 300 years ago. Despite being shorter in length it felt full of content, there were no wasted scenes and everything advanced the plot in some capacity. With some call backs to the original film that don’t feel cliche either which was a pleasant surprise!

On a whole I really loved this film. The set pieces, actresses/actors and cinematography really set this film apart in 2022. I am big fan of the original Predator, so I was hopeful that the character being brought into a new era could revitalise it. However, I was worried as because the film has gone straight to Hulu/Disney+ there was a possibility the creators did not see as much potential for it. Fortunately my worries were unfounded, because Prey is amazing.

Most films this year that have come out this year straight to cinema have not come close to what Prey offered. Whether they will release it at the cinema I doubt it. For now at least find the best screen you have or have a movie night with a friend as the film will excite all those fans of the original film and capture new fans at the same time.