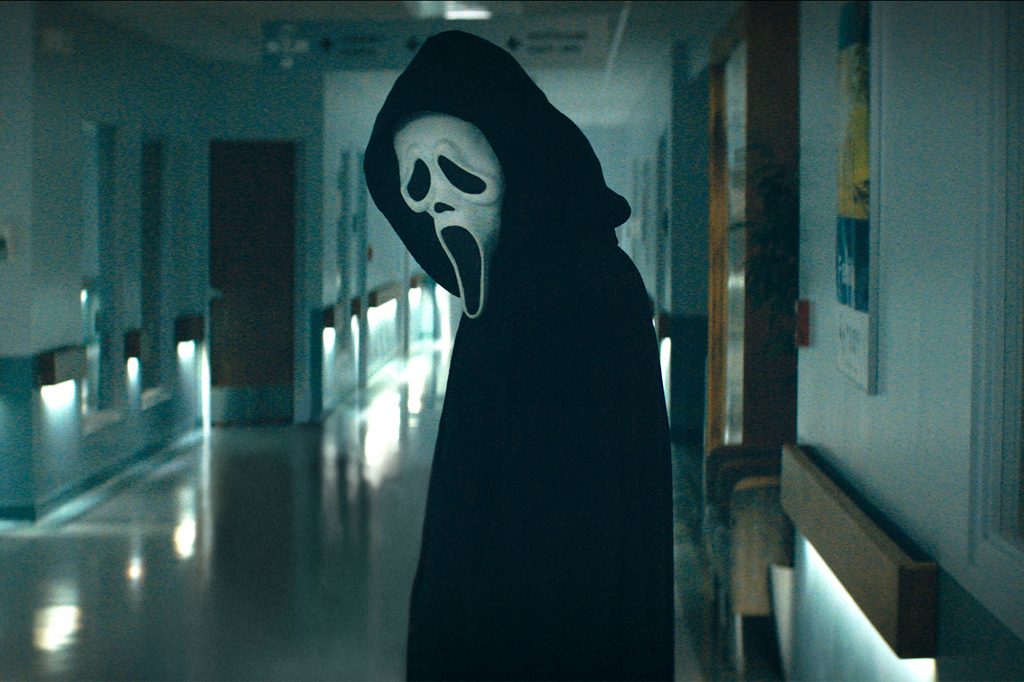 A nostalgic trip for fans of the Scream franchise, while keeping things fresh with the new cast.

Scream (2022) picks up 11 years after the events of Scream 4… a new killer in Woodsboro has stepped into the Ghostface costume, proving to the town that it just can’t run away from its past.

True to previous films, Scream opens with an ominous phone call to a landline (aw, bless), which quickly takes a deadly turn. Before you can catch your breath, Tara Carpenter (Jenna Ortega), is attacked by the new Ghostface… pretty quickly setting up how brutal this film is going to be.

For the first time in a Scream movie, the opening ‘victim’ actually survives… but was this the plan? The attack forces Tara’s big sister Sam (Melissa Barrera) and boyfriend Richie (Jack Quaid) to visit Tara in the hospital and we’re soon introduced to the films gallery of young friends, or should I say…suspects? Sam, who has a shady past, promises to figure out who is behind the mask and why they are committing these brutal attacks.

Realising they can’t do this alone, they seek some ‘professional’ help, enter retired police deputy, Dewey Riley (David Arquette). Who is understandably reluctant to help as he’s had his fair share of dealings with psychopathic killers. Dewey decides to get the old gang back to town by calling survivors Sidney Prescott (Neve Campbell) and Gale Weathers (Courtney Cox). Even with the original knife-dodging trio back, the movie doesn’t steer far away from the new cast, keeping them the central focus to the story.

The new group of friends have all seen enough of the “Stab” movies (the film franchise within the Scream universe) to help them try to figure out who the killer is, but it’s clear that they cannot trust anyone. The Scream franchise has always done an outstanding job at been self-aware and this movie takes it to the next level. Interestingly, most of the new characters are related to characters from previous films, making it clear that this is no ordinary Scream sequel, rather it’s “a requel” as explained by one horror-savvy character, a cross between a reboot and a sequel. It quickly becomes apparent this new killer is trying to wipe out the past… what’s the motive is behind this? Well, I guess you will have to find out…

The kills and gore in the film are bigger and better than ever, this new Ghostface killer is not playing around… and is here to get the job done. The new cast kill it (pardon the pun) with lots of laughs and high stakes. There is a ton of respect for the original cast, but thankfully the movie is focused on passing the torch which this reviewer is all for. After all, there are only so many times original hero Sidney Prescott can keep facing down the same masked killer.

The new Directors Matt Bettinelli-Olpin, & Tyler Gillett (Ready or Not, V/H/S) do an amazing job at paying respect to the previous films, especially the original Scream (1996) and tell a brutal story that cuts deep into what the franchise stands for. They find the perfect balance of poking fun at the films, finding that ‘meta’ balance whilst staying consistent with the killer’s motive.

My only advice to you, is to make sure you watch all 4 Scream movies before seeing this film, as the easter eggs and references to them really make this 5th entry shine. If you are not aware of previous killers (who I won’t spoil here, go watch the films) then you may be left scratching your head. I would go into more detail about the numerous exciting twists and turns to expect and hints to look out for. But this would just ruin the experience.

Overall, I left the cinema pleased, this movie as a must see and is easily my favourite of the franchise since the first film. Original director Wes Craven would be proud.