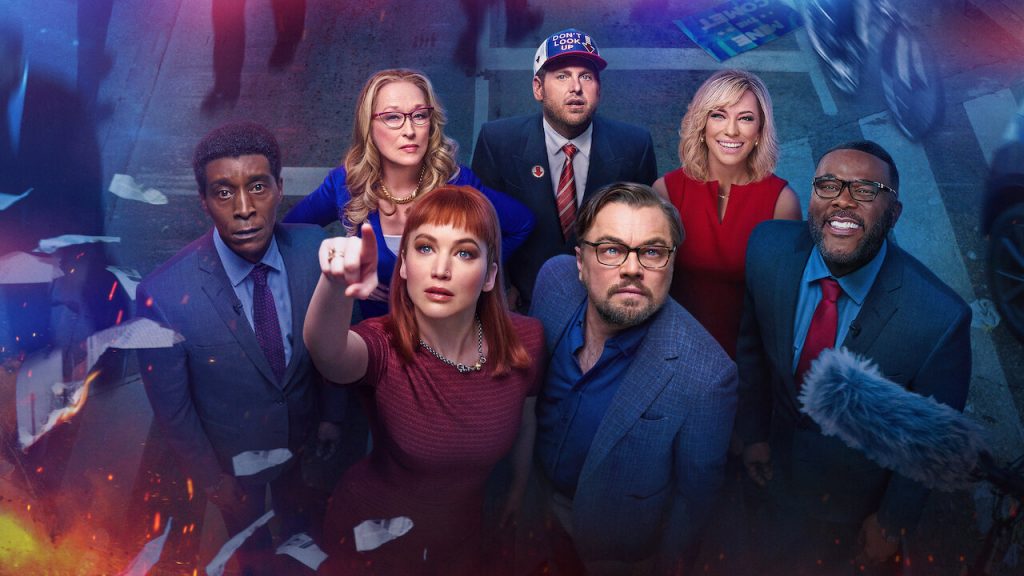 Star-studded climate warning/black comedy Don’t Look Up, has been sitting in everyone’s Netflix ‘most watched’ for a few weeks now but has met with some divisive opinions. With what could be an important message, but attempting to temper it with comedy, how will the film hold up?

With Jennifer Lawrence and Leonardo DiCaprio as just two of the cinematic heavyweights tasked with leading this film, you’d be right to expect a fairly gripping picture, regardless of whether it takes a dramatic or comedic tilt.

As astronomers Kate Dibiasky and Randall Mindy respectively, Jennifer and Leo effectively stumble across a ‘planet killer’ comet. Hurtling towards earth with basically no chance of stopping the apocalypse, the astronomers set out to warn the world of their imminent destruction by route of panel shows on TV.

The metaphor for climate change is a little heavy-handed, as you can probably expect. It’s easier to shoehorn this message in the form of an unstoppable force of inevitable annihilation, even if it has all the subtlety of a brick.

However, message aside, this early point is where the film started to lose its touch and direction. The astronomers inevitably come up against resistance to their message from the likes of the Trump-esque president (played by the legendary Meryl Streep), her Chief of Staff (Jonah Hill) or the peppy yet oblivious cable TV hosts (Tyler Perry and Cate Blanchett).

Is it due to the lack of passion in the astronomers’ delivery? Is it due to the resistance offering up better counter-arguments and providing a somehow balanced opposition to a force of certain death? No, this is due to the film’s director, Adam McKay.

Known for his contributions to Saturday Night Live and Will Ferrell comedies, Talladega Nights and Anchorman, his relatively slapstick approach to comedy doesn’t exactly gel with his haughty approach to climate change metaphor. Much of the film feels like he’s punching down from his perch of presumed intellectual superiority. If this feature was intended to be his own An Inconvenient Truth… sadly, he’s a long way off. He may be rightly damning in his attitudes towards the lack of focus seen towards these issues from the likes of cable news in the States and views on celebrity culture. However, the approach doesn’t come across as comedic lampooning, rather just arrogance and sneering.

This scorn slaps out across generational divides as well, with most people a fair target in his eyes… just without a measured satirical view, in favour of one of spite. From Dibiasky’s ‘enlightened centrist’ parents, fresh from angry Reddit comment boards… to the apathetic (of course) millennial who’s more focussed on the next entry to their favourite movie franchise.

The A-List cast do ample work holding up their end, with no let-down performances across the board, but it’s the overall tone and message that can make this movie a bit jarring. It’s unlikely to be successful in drawing people across the undecided divide on their views on climate change.

The movie isn’t without its accuracy however. Amidst the spite and wide-bore approach to taking fire at people, groups and political views, at points the movie can feel disturbingly real. The level of denial, lack of concern and what are supposed to be caricatured viewpoints can feel more like a genuine documentary than a comedy film, giving the film an uncomfortable seating in our current reality.