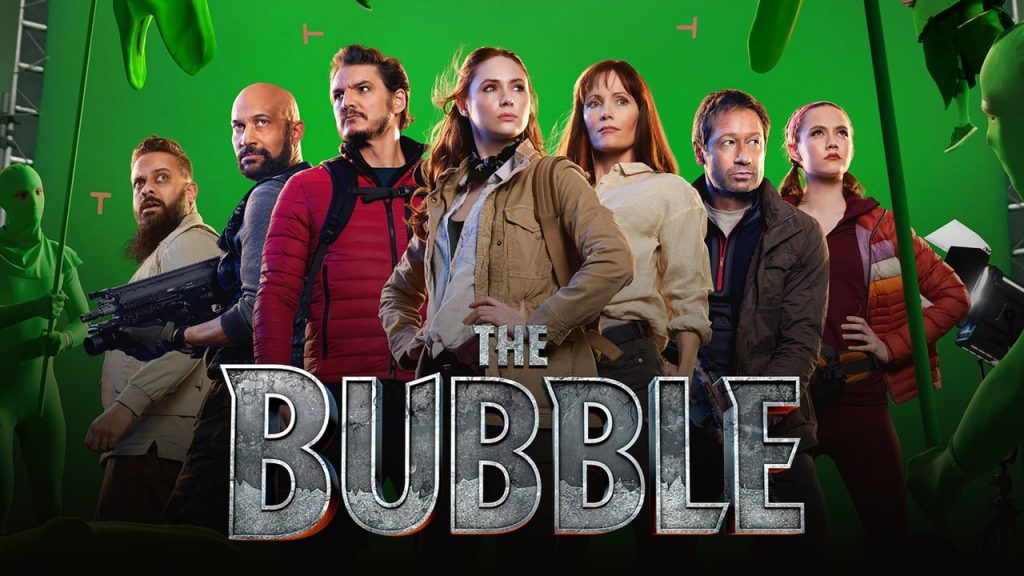 If anyone can get away with jokes about the pandemic it is Judd Apatow, the mind behind Superbad.

Set in a mid-pandemic production ‘bubble’, the cast set about shooting one of the few movies still with permission to continue. Cliff Beasts 6 bears all the hall marks of a gas station movie, or perhaps content for the streaming grinder these days. Starring Karen Gillan, Keegan-Michael Key, David Duchovny, Pedro Pascal, Peter Serafinowicz and more, you would expect someone to shine.

As the actors arrive at the posh hotel for their two-week quarantine things immediately start to take a turn. The tiny support staff team come to terms with their requirements and the actors discover solitude is not their strength. Of course we recognise the references to our own experiences, but the film does nothing to create anything but very obvious humour from the situations. We all know when left to your own devices for two weeks you go a bit feral, but it feels like Apatow tries to rush through this rather than lean into it.

The next phase is introducing the character dynamics, and sadly one of the more promising stars, Guz Khan, is not utilised enough. Karen Gillan gets most of the limelight and does create a believable narrative as a C list actor. She makes the best of the writing given to her, but as with most of the characters she fits into a very simplistic mould. I would have liked to see something a little more offbeat like The Lobster or perhaps the recent French Dispatch. Serafinowicz plays the unliked corporate flunky as the producer, while still trying to wrangle all the actors with as much patience as he can muster. He is well cast for this role but once again feels a little conflicted, they should have allowed him to pursue either the disciplinarian or the friendly flunky. As it happens, he becomes a bit of a passenger as the cooperation pulls the strings around him. I can see how on paper this might be a nod to realism for those in the industry, but I don’t think it quite came together.

The moments on set should be the best time for the movie to show how it sets itself apart from the dross it is faking. However, scenes like the sick actors on the high ropes feels a little disjointed with too many people pulling focus. The punchline of this scene just kind of happens and with so much foreshadowing you’re already looking past it. Towards the end there is a great escape but the camera shots just don’t create any sense of urgency or atmosphere. The sense that things are just happening chaotically feels like it seeped into the movie we are watching not the movie they are making.

I get the premise is to make something so stupid nobody will feel to triggered by it. If you are going to take the risk to make something that might be too soon, then accept it and make the most of it. This was a colossal waste of time for everyone involved, it has no interesting comment on this moment in history, and it does nothing to elevate our enjoyment of our shared experience with it. We have wasted enough of our lives in the last few years, don’t let this shave off more of your time.