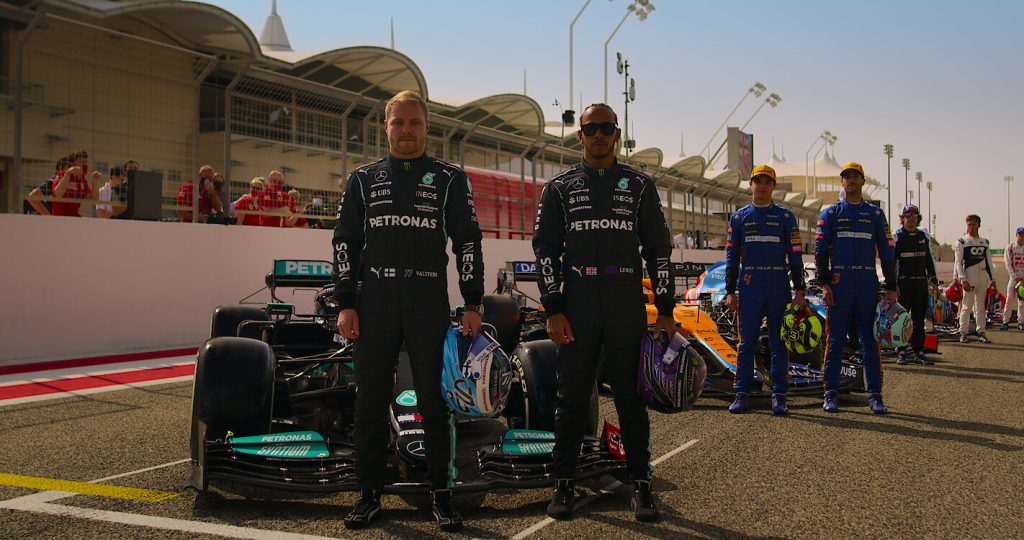 One of the most contentious and exciting seasons of F1 was perfectly timed to be captured behind the scenes. Entering the final race on equal points, Hamilton and Verstappen had already created a fever pitch hype, as the laps unfolded and the race direction started to unravel, the on & off-track drama had only just begun. Following the teams off track and behind the scenes these personal feuds are the bread and butter of the series.

This pursuit of drama can at times get the better of the show. There is a fair amount of time devoted to McLaren’s new driver pairing, and trying to create a narrative that was not there. Lando Norris took to the press to make his feeling felt about this. At the end of the last season there was also mention of radio extracts being played out of order to create narratives, so the tendencies remain. The show does find its form with its depiction of Yuki Tsunoda’s journey of development. Pulling back the curtain on just how much the training regime changes for F1 and a championship mindset. These insights into the sport and its competitive edge have always been where it shines. For example, in the first season we saw emotions running high and the team camaraderie in the Haas garages during double DNFs. Haas always seem to provide the highlights somehow, this season they are back with the very temperamental and controversial Mazepin. Especially with the recent sporting ban for Russian drivers, his name is certainly under the spotlight. Getting to see his tantrums first hand certainly helps dissolve any remaining sympathies you might have.

The effect of Covid-19 on the production seems to be almost unseen, referenced only by the branded masks and Hamilton briefly discussing its impact on his races. Sport is escapism for the watcher and I can see that is probably top priority for now but I wonder if in future years the absence is a missed historical opportunity. None of the drivers really discuss their experiences or feelings, something we can all sympathise with and understanding how its honestly affected them would be fascinating.

My favourite part of the season was actually not the big championship story, perhaps because that was so played out in the news anyway. The duel for the second seat at Mercedes was a juicy expose that the series plays out excellently. George Russell racing the wheels off a lesser car and Valterri Bottas getting the worst of luck in top tier machinery. The moments that lead to the ultimate decision were very much not on view from the public. The strength of feeling and level of understanding of how close it was for one of them to make it really came across.

As an F1 fan it annoys me when a new take is not always being presented to me or when track action is on the light side, however, I do forgive it as Drive to Survive is far from a documentary for purists. If you have no idea what makes F1 special I do think Drive to Survive continues to do a great job conveying the great carnival. It is meant to be fun and accessible and I think it nails that.