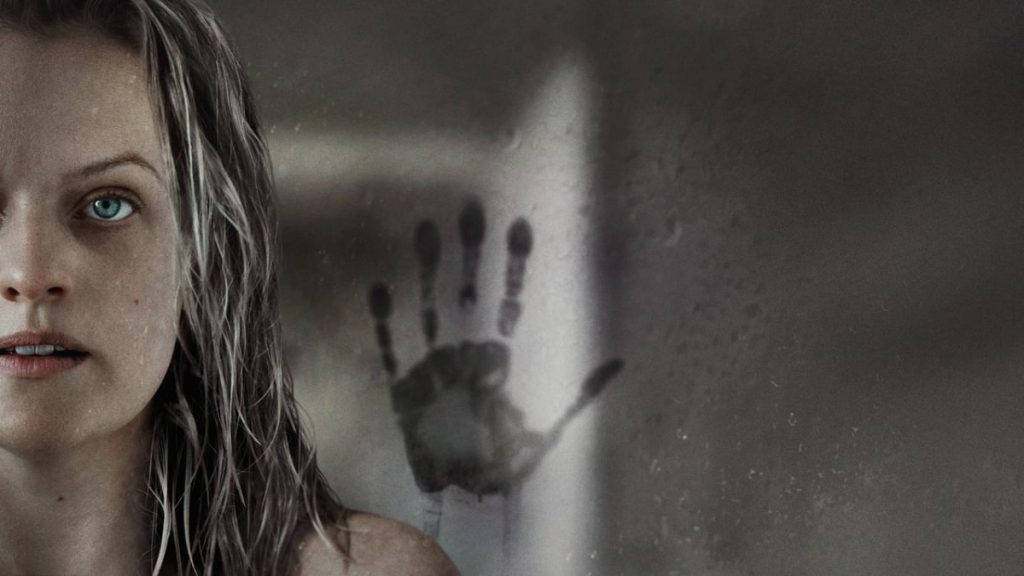 Set on a scenic cliffside, overlooking picturesque ocean views, Cecilia (Elisabeth Moss) makes a daring night-time escape from her abusive partner Adrian (Oliver Jackson-Cohen). Leaving in the dead of night, avoiding alarms, security cameras and leaving behind her beloved dog, Cecilia enlists the help of her sister (Harriet Dyer), to escape the clutches of mental and emotional abuse.

Finding refuge at her sister’s ex husband’s (Aldis Hodge) house, a police officer who vows to protect her, Cecilia is told Adrian has committed suicide. As her guard drops and she becomes more confident however, she begins to be haunted by a mysterious figure, that no one can see, yet torments her, in a way all too familiar to her.

Based on the novel of the same name, and tv series, this new telling of a classic horror story, is made all the more relevant in modern ages. It shows how someone can be manipulated into staying in abusive relationships and how difficult this abuse may be to tell others about, or convince them of, when the abuser is not showing the signs, or in this case, is seemingly not even alive.

Elisabeth Moss brings a stellar acting performance to this film. Both emotionally gripping and hauntingly sad, her constant struggle to get the people whom she loves to believe her torture, is often, difficult to watch, but in a way that makes you praise her acting, rather than looking away, which I assure you, you won’t want to do. Best known for her roles in Mad Men and The Handmaid’s Tale, Moss was the right pick for this part. She is a powerhouse at emotional and thought provoking roles. She brings an element of normality to this particular one, as if you or someone you know, could have fallen into Adrien’s clutches just as easily. Her Cecilia even says that she is just a normal girl, and asked why Adrian had chosen her, in a monologue that is intense, heartbreaking and harrowing. Moss’ character grows in strength throughout the film, but her psychosis grows as well. Beginning the film as a well put together, yet clearly reserved woman, she slowly becomes a dishevelled version of her former self, as her ex partner manipulates the people she loves, and destroys her opportunities for progression in life. She shows great character progression, and regression throughout, in an impressive display of her acting prowess.

This film had the chance of being slightly comical. Invisibility can bring some hijinks, and without the correct visual and special effects, this could have been borderline comedic. Yet, it cleverly balances classic horror techniques, modern musical motif and top ranking acting performances to make you dive head first into the story of Cecilia’s struggle, and you spend the film begging the characters to believe her.

This may not however be a film for the more hardcore horror fans out there. Whilst technically it fits in the genre, it is definitely more of a thriller/horror. This film does however pack a serious punch. It heads in one direction, and you settle yourself in, yet moments later, it turns dramatically, leaving you gasping and desperate for the next scene. Continuing the twists and turns all the way to the film’s climax, it truly leaves the audience’s jaws dropped.

Smartly put together, the cinematography is wonderful, each shot could be a picture. Dramatic scoring by Benjamin Wallfisch (who has credits in Blade Runner 2049) holds well within the film, being large and powerful at moments, sparse and tense at the right times. It pulls you in, and drops you suddenly, making your stomach jump, just adding to how this film is trying to make you feel, and it does it well.

This film excellently separates itself from the slightly comedic Kevin Bacon Hollow Man, that has not dated well when watched in the modern age. This retelling brings the fear of The Invisible Man into the 21st Century. Creating a situation that doesn’t feel all that crazy, and using the cyclical abuse of our protagonist to reach out to the viewer, and add a new level of horror. By tapping into something that is all too real for Women and men in our time, The Invisible Man uses manipulation, ignorance and disbelief as some of its most powerful tools. A great and gripping watch.