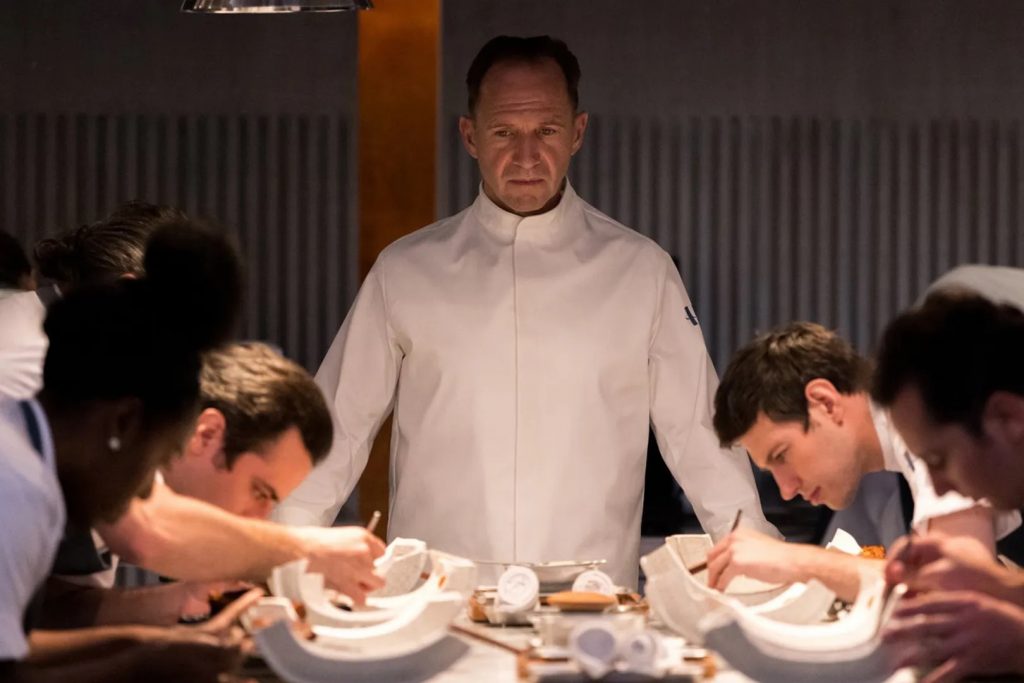 The phrase “This food is to die for” takes on a very literal meaning in new horror/thriller, The Menu. For these diners, it really will be a night to remember.

There aren’t many films like The Menu, so as it has now appeared on streaming service Disney+ after its initial release in November of last year, I thought I’d take a look. The premise is simple enough, a top chef builds a restaurant on a remote island and at a price of $1250 a head, only the mega-rich and influential can attend. The cast is lead by Tyler (Nicholas Hoult) and Margot (Anya Taylor Joy) and Chef Slowik (Ralph Fiennes) Hoult is a pretentious foodie that is obsessed with Chef and blindly ignores (or so we are led to believe) the carnage that begins to unravel. Anya, is his spur of the moment companion who for the most part couldn’t care less about the food on offer.

Ralph Fiennes portrays the mysterious head chef, Chef Slowik, in charge of providing the best meal possible for those that can attend. He is as always, the star of whatever scene he is in, a commanding figure which suits his style very well. It is great to see the relationship between him and Anya – as she is quite a match for him, after bonding over both being where they are now through hard work. This relationship was one I was not expecting but it really led to the second half of the film really upping its game. This makes to the rest of the cast somewhat disappear either figuratively and often literally!

Visually this film is a treat – we spend the majority of the time in one locale but the attention to detail is very accurate. Especially in the food prep and presentation. It really looks like it was all being made on set there and then. The pretentious nature of the food design again ties it in with the theme whereby people are there to be seen. Many of the dishes have a tendency to poke fun at the wealthy visitors. One example is bread being a staple of the working class for thousands of years is not deserved by them so they just get what would go with the bread!

The running theme throughout the film which ties it together is the rise of wealth and lack of respect for its value. This is driven home by some guests touting their wealth and wanting special service. The ironic and brilliant flat response from the waiting staff helps nullify all of their wishes, bringing everyone onto an even table. It is mid way through the film that the true nature of what is about to happen becomes apparent. The amount of suicides and deaths that start to occur is startling! However, what is achieved well is that they are not ‘meaningless’ each death represents a point and that point again ties in with the theme of the film.

After watching the film I thought that the majority of the supporting cast let the film down. They don’t add much in the way of substance only a minor filling for the plot. However, in subsequent days I have found that they are not what I thought they were. They represent different walks of life that have become too reliant on the wealth they have achieved and do not savour what they have until it is too late. We have cheating husbands, washed up actors, over zealous food critics and workers hanging onto the coattails of their billionaire founder. So focused on what they want to have, be given or even desire they don’t see their inevitable doom. Which is provided brilliantly by Chef and his staff. This second thought has given me more appreciation for this film. It is a simple concept but one that mixes well together with the cast, setting and underlying theme. Overall I would recommend watching the Menu, maybe not on a full stomach though…!