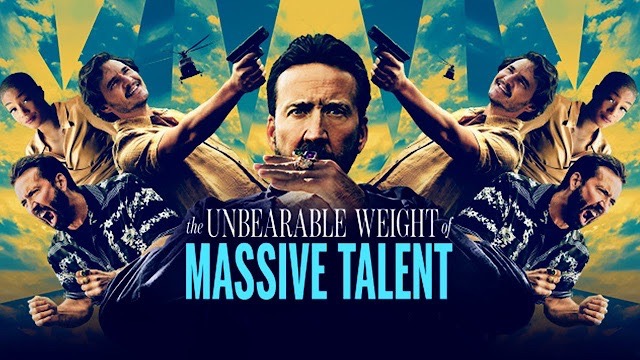 Nicolas Cage plays himself in an attempt at satirising his larger than life persona and the film industry overall. But is this a step too far even for the master of making himself the role?

To this reviewer, Nicolas Cage is sort of like the cinematic version of rock band, Primus. Primus get their own genre space (literally just Primus – go check your iTunes genres if you don’t believe me, or just Google it), much like Nic Cage seems to manage when he stars in a movie. Is Con Air an action film or is it a Nic Cage film? The same can be asked happily of most of his filmography. As such, I was particularly happy when he decided to lean into his meme-like status and go full meta by actually starring as himself, not just a rebranded Nic Cage as he seems to play often enough.

This isn’t entirely fair, so I’m putting this disclaimer of sorts at the beginning. Nic Cage is actually a very good actor – go see Pig before or after this film if you’re in any doubt as to the veracity of this claim. ‘Cage Rage’ might be worth some points on the internet (and yes, it’s legitimately funny – just like Cage’s weird moments of shouting or emphasising odd words), but it’s ultimately reductive of his ability.

The Unbearable Weight of Massive Talent sees Nicolas Cage recruited by US intelligence services to spy on a wealthy fan of his. With his fictionalised life in tatters and on the brink of financial ruin – he accepts, and heads to the birthday of Javi Gutierrez (Pedro Pascal). However, the two soon become friends collaborating on a movie of his, somehow filming both aspects whilst also playing himself…and his younger self ‘Nicky’.

Granted, on paper it’s a lot. However, the film makes it easy to forget this with the undeniably ‘buddy’ chemistry between Cage and Pedro Pascal. Unfortunately, Pascal is not a natural comedic actor and can fail to lend credibility to some of the more intentionally funny moments. When Cage is left to his own devices, the physical comedy and self-referential humour is at the top of the order – both hilarious for us as viewers and natural for him.

The point at which the film ends and the meta criticism of the film industry begins is almost impossible to work out, with no outright visible seams of which to speak. Some of the ‘in-jokes’ will have you wondering whether that’s the buddy-comedy half, or the satire you should be laughing at.

The film isn’t likely to sweep the next Oscars or BAFTAs – not that it seems to be aiming for it. However, with Cage at the fore and a great supporting cast including, but not limited to, Tiffany Haddish, Neil Patrick Harris and Sharon Horgan, it’s still a thoroughly enjoyable romp that’s a happily strange sideways move from most of the buddy comedy entries around.