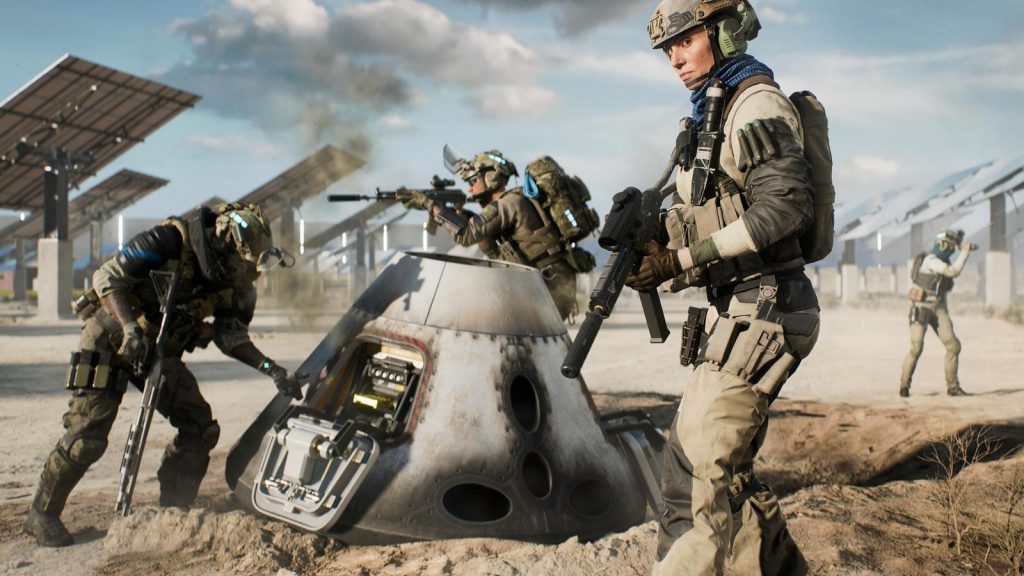 EA pulls out all the stops with Battlefield 2042 to deliver its new improved addition to the series.

Enlisting the help of more studios, more money, more development time and more players than ever before EA and Dice dug deep this time. This extravagant game of 128 person bullet pong has created their biggest hole to get out of yet. With their studio lead heading out the door a week after release they clearly love it when a plan comes together. With an all-time low rating of 2/10 for users on Metacritic this could rival the worst releases of all time.

Battlefield 2042 is set in a time where the climate crisis has become so bad most countries have dissolved into expatriated militants. Fighting for no apparent reason, with no apparent direction, with no leader, with no overarching objective, 128 players aimlessly shoot at each other until the game crashes or you go play a different mode. With no scoreboard at least you won’t feel bad about letting the team down. It’s also unlikely you managed to kill anyone anyway, unless you ran them over with a hovercraft of course. I am sure they will patch the weapon spread, but I am enjoying the YouTube videos of the guns throwing more shapes than Travolta in Saturday Night Fever.

When you seek out these other modes you will find two options. Over the gaping hole of the absent campaign is the tatters of past games in portal mode. Painted with 4K textures these beloved classic maps help remind that Battlefield was once great, now blinded by greed and ineptitude the series is set to mimic the barren wasteland of its own climate crisis designs. I had the most fun here however, especially in the Fiesta mode which plays as a small team deathmatch mode on an area of Arica Harbour. Using the classic weapons on one of the best designed maps in the series was certainly a nice moment of nostalgia, once it passes you still find yourself in the present state of 2042. The last card up Dice’s sleeve is Hazard Zone. Queue for an inordinately long time while the game connects the 12 global players available, then collect items while the tension builds in the seemingly empty map, eventually some AI will arrive and decimate your squad before you can extract. Leaving you without reward just as in the other modes without a score-based metric to measure your performance by.

There is certainly moments of battlefield madness, where the big sandbox creates those impressive or amusing comings together of strangers doing something truly unexpected. Hover crafting into a helicopter for a truly bond like take down or a roof garden full of tanks. Sadly, the bent and broken mould of Battlefield can barely contain the players given a free 10 hour trial, I for one leaked out the corner after about seven hours with a wry smile at £69.99 well saved. I guess the demo period was the one thing EA got right.