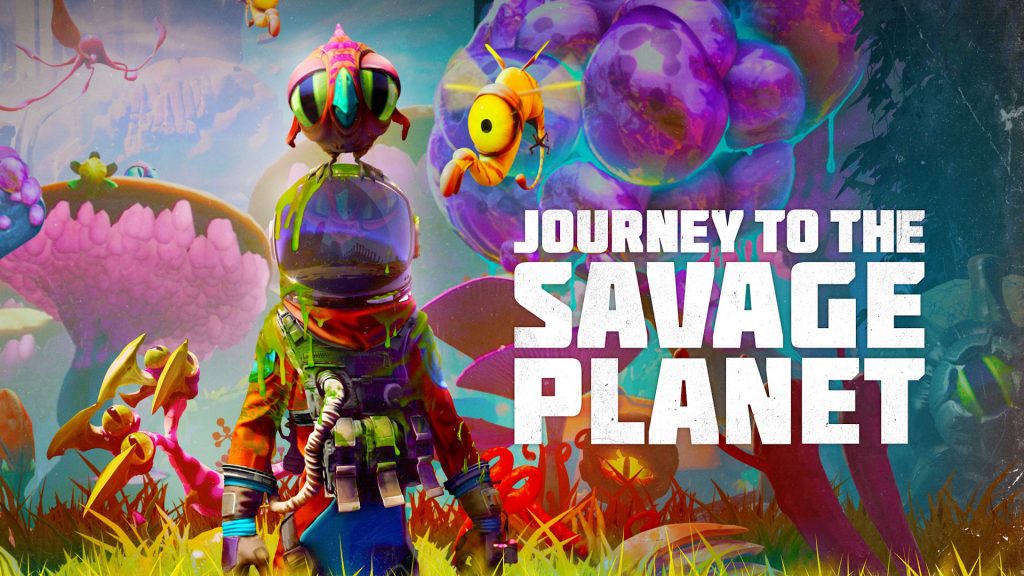 I can only imagine how difficult it must be for Typhoon Studios, the first-time developers of Journey to the Savage Planet, in releasing so soon after Obsidian Entertainment’s smash-hit The Outer Worlds. Both games should be commended for their originality, charm and dedication to being complete experiences in the age of downloadable add-on content, but both games are also about a very, very similar topic.

Perhaps it’s no coincidence that the two original sci-fi games, proudly releasing independently amidst the grossly monetised software of the industry, are both so plainly about rampant capitalism. That said, Journey to the Savage Planet is deserving of more than just this comparison, as Typhoon Studios have given it a more discernible flavour by involving the player in the game’s unrelenting colonialism. Even the title is a spoof on this colonialist idea: the planet you arrive on isn’t necessarily ‘savage’ at all, simply new, alien and, if anything, oddly relaxing. It is here that the ironic humour of Typhoon’s first game comes to light, and it proves itself to be a surprising release that is sure to chart as one of the year’s earliest sleeper hits.

As an intrepid explorer, you work for Kindred Aerospace, which was apparently voted “the fourth best interstellar exploration company”. Your goal is to discover if an uncharted planet is habitable, first by stripping it of every resource you can and, if necessary, killing the things that are trying to prevent you from doing so. “Leave no stone unturned. If a stone refuses to turn, smash it to pieces!” reads a worryingly chirpy email sent from your superiors, which sets this future’s rather dystopian attitude. I have seen some critics call this tonally dissonant – that such a jovial approach to gameplay does not match the cynicism of the actual narrative. Instead I found the contrary; that in matching this Paul Verhoeven, Total Recall-style humour with some questionable motives, the player is pulled into being part of the commentary, whether you want to be or not. It’s purposefully meta with your in-game involvement, a bit like 2012’s cult favourite Spec Ops: The Line, only with more sardonic joy.

As the story progresses and your character discovers an unexplained, previously unnoticed alien structure, the goals of your mission become more sinister, the intrigue building when the company CEO personally asks for you to send the collected data to him directly. Coincidentally, you are unable to return home due to “budget issues”, meaning the company can only afford your travel to the planet. This carrot-and-stick ploy creates a narrative reason to make you continue stripping the world in order to eventually be able to return home. 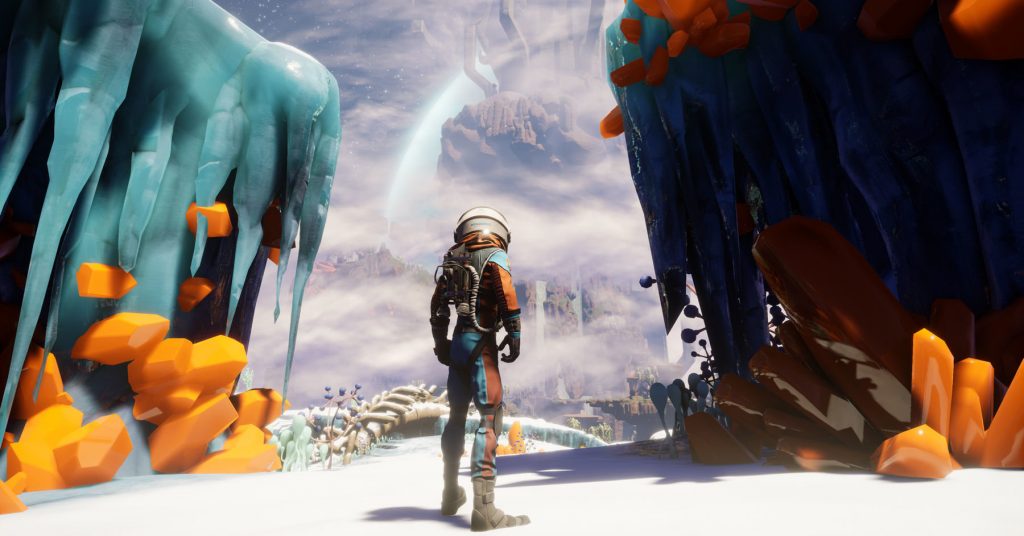 All of this information is delivered through live-action videos found on in-game screens, which I found to be consistently funny and clearly made with glee. Its humour is reminiscent of the likes of Rick and Morty; irreverent sci-fi humour with a hint of existential dread, shown most commonly through live-action advertisements displaying capitalist horror. Players are treated to ads for “Slimo: the reconstituted meat buddy”, in which a living creature is made from discarded scraps of meat for anyone in need of a friend. Equally as oddball is the ad for “Mini Mall”, wherein real, tiny humans are grown and put into a model shopping mall to be observed for fun, until the owner can choose to go “Black Friday” on the inhabitants and watch them kill each other for deals.

Even the moment-to-moment gameplay animations carry this trademark humour and detail: despite being in the first person viewpoint, your character’s personality is well animated with energetic hand gestures (quite like id Software’s 2016 reboot of Doom did for its protagonist). These small details are always appreciated – even when you turn off and then reboot the game, your character wakes up yawning from bed. When you eventually unlock the ability to fast travel, it is explained that you are actually killed and cloned at the chosen destination; you can even see your original body when you die and are returned to that spot. While the graphics are nice and colourful, it is clear the game was made with a smaller budget than most, so to liven the visuals up with these animations is a real credit to Typhoon’s effort.

Unfortunately, the game does lack polish in the area of its first person gunplay. While by no means the core component of the game, areas that involve using guns are made frustrating by a jerky and unnatural aim. The aiming reticule moves too snappily and unresponsively, sometimes feeling too floaty while other times feeling too stiff. It’s disappointing, as the rest of the game’s movement is fun and fluid, especially once you unlock the jetpack and grappling-leash abilities to traverse the planet. One major positive of the budget imitations, however, is that the game is extremely well priced. It can be found at most retailers and online storefronts for £25 or less, and considering the amount of content on offer, that is excellent value for money. It is a pleasure to be reminded of the benefits of mid-tier games, ones that may not have the polish of their high-priced counterparts but still retain a sense of ambition and charm. The latter being the operative word, Savage Planet is a great little adventure I highly recommend the journey to.