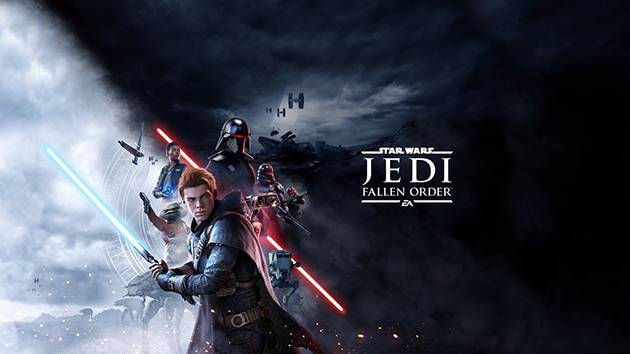 Set five years after the purge of the Jedi in Revenge of the Sith, former Padawan Cal Kestis (Cameron Monaghan) has been hiding from the Empire as a shipyard scrapper. When a tragic event causes Cal to reveal himself as a Jedi, the ruthless Inquisitor known only as The Second Sister (Elizabeth Grullon) attempts to hunt Cal down, as Cal himself races to locate other force-sensitive children across the Galaxy…

The fact that it has taken Electronic Arts seven years to release their first single-player Star Wars adventure is nothing short of staggering. As the gaming industry continued to chase the ‘live-service’ trend that has marked this generation as one of many, easily-monetized online games, EA was also content to try their hand at using the license to this effect with Star Wars: Battlefront I and II. If it were not for the immense backlash to the unquestionable gambling-inspired mechanics featured in that second entry, and the media furore that followed, we perhaps may never have got Jedi: Fallen Order. As clunky as that title reads, it does nonetheless auspiciously imply that EA is gearing for ‘Star Wars Jedi’ to run as an adjacent franchise to their multiplayer Battlefronts, meaning we may expect to see more. Equally as promisingly, its developers Respawn Entertainment are hot off the heels of crafting one of the best single-player campaigns I’ve played this generation in the underrated Titanfall 2, and the immense success of their battle royale game Apex Legends. It’s with great pleasure then that I say Jedi: Fallen Order continues to paint Respawn as one of the best developers in the industry today.

From first igniting my Lightsaber, hearing and feeling that trademark sound, to the moment I discovered you can customise its blade, colour and design, Jedi: Fallen Order brought back the joy of a Star Wars game that the industry has not seen since perhaps the days of Jedi Knight in 2003. Yet, to my great surprise, these were simple pleasures at the start of my journey. As the game progressed, it opens up to be about so much more. There are many joyous moments of pure Star Wars action to be sure, but what set Jedi: Fallen Order apart was its unexpected focus on something no Star Wars game has truly focused on – exploration. A genius approach to a Star Wars game (that makes it seem quite stunning that it hasn’t been realised before), Cal’s journey is one of discovery, and it adds that extra hook to the thrilling action.

Undeniably, this game is a fusion of Crystal Dynamics’ recent Tomb Raider reboots and From Software’s Dark Souls series. The game sees Cal clambering and scurrying along perilous paths and completing physics based puzzles just like Lara Croft, it even shares those games’ slightly wobbly controls and movement that (for better or worse) makes the platforming extra tense. Combat has an effective weight that makes the Lightsaber feel much like it was portrayed in the Original Trilogy, where Mark Hamill would wield it with a sense of heaviness, in the way Cal is animated when slashing and parrying. It still shares some of the super-powered fun of the Prequel Trilogy however, as Cal blocks blaster shots with speed and utilises the force to rush towards enemies. That said, the Lightsaber does have a ‘baton’ feel on human enemies, who are merely scorched and marked by it, but not animals and insects, who are sliced to bits. Presumably this is to keep the age rating down – it has always been a tough conundrum for developers in making the Lightsaber a functioning gameplay device.

The combat is intentionally difficult, à la Dark Souls, requiring tactical blocks, counter-attacks and methodical strikes. Even the save system is Souls-inspired; Cal will meditate at certain points and upon death he will return there, losing all gained experience points and force power. To get it all back, the enemy who killed you must be found and attacked, in a similar vein to Dark Souls. Yet these clear inspirations feel like a natural fit for Star Wars, and their combination with this game’s story keeps everything feeling fresh. Cal’s nature of being on the run means that he has disconnected himself from the force to survive, meaning he only recalls certain abilities early on in the game. This lays a smart groundwork to discover new force abilities as you progress, with a genius little idea of him remembering his training as Padawan functioning as the game’s tutorials.

Perhaps the game’s clear inspirations mask a lack in innovation, but for myself, the game did not really need to innovate. Despite much of Disney’s Star Wars on film being a constant reminder of things that once were, Star Wars in games (and gaming as a whole at the moment) needed reminding of “a more civilised age” (had to get one reference in there) where honest-to-goodness, feature complete games were made and released with no craving desire for constant consumer micro-purchasing. The game constantly rewards you with upgrades, lore discoveries and customisation items – yes, EA’s excuse to extract more money in their Battlefront series is actually provided for free in this game, remember when things used to be like that? It’s astonishing how infrequent that is now, especially from this company. A response this may well be to the debacle that became of Star Wars Battlefront II, but that is fine by me. Made with heart and attention, Respawn’s Star Wars Jedi: Fallen Order is a promising sign that this series still has so much to give, and I hope we continue to see more like it – both in this franchise and the industry as a whole.