The latest piece in the Japanese giant’s streaming jigsaw sees them take on the home cinema arena, where there is already some very strong competition. The HEOS HomeCinema soundbar is designed as a one-stop solution for all-round audio enjoyment…

At first impressions it’s a slim rectangle that is just over a metre in length and a slimline 9cm deep. The matching subwoofer is also relatively svelte, coming in at 30cm in height and depth and 17cm wide. Beneath the cover is where the real excitement lies, Denon have gone to town on the technology that makes all previous HEOS products sing.

Powered by four Class-D amplifiers, they’ve fitted ‘Dual rounded rectangular mid-woofer drivers, composite Kevlar cones and double magnet motor system for highest efficiency and linearity. These are coupled with two soft dome tweeters that use powerful neodynium magnets for a silky smooth but well extended treble. Denon’s AV background has given them a big advantage on, with the company’s patented digital signal processing being utilised here just like their top of the range AV receivers. Finally, the big one-up over SONOS (arguably its closest rival) comes in the form of DTS decoding, as well as Dolby Digital and Digital Plus.

Quick and easy to use – the Denon HEOS app.

As you might expect from a wireless system, the sub connects to the bar via Bluetooth. There’s also a host of connection options including; a HDMI in and out, a coaxial input, an optical socket, USB and an AUX connection.

After a quick download of Denon’s Android app (Apple and Kindle versions are also available), we were quickly up and running. This allows you to control it all using your smartphone and is easy to navigate.

For both film (playing Blu-rays) and music (we streamed FLAC files), the HomeCinema was a confident performer. We found out just what it was capable of by playing ‘Star Trek: Into Darkness‘, which sounded truly epic. Dialogue was clear and full sounding with excellent separation, plus the soundstage extended well out of the confines of the case itself.

Turning to its musical capabilities, it was equally impressive and sounded much more like a traditional 2-channel Hi-Fi system than a soundbar. Of course this is where the HomeCinema can really come into its own… as previously mentioned the Denon can be used as part of a multi-room music system, allowing you to add it to your existing network or as a starting point for building one.

One notable downside it that it isn’t capable of using the HEOS 1 speakers as rears – a clever trick the SONOS employs with its own PLAY:1 speakers – meaning that a wireless 5.1 system is unfortunately not an option. On the plus side, the Denon is something of a bargain at roughly half the price of the PLAYBAR.

On its own merits, the HEOS HomeCinema is an assured performer, capable of switching between both film and music with equal aplomb. Denon’s app is a great example of functionality and friendly usibility.

To find out more about the HEOS HomeCinema click here.

If you’d like to hear any of our soundbars in action or for more information of enhancing your home cinema sound, feel free to pop in-store or call our telesales team on 0333 900 0093. With our friendly advice and price-beat guarantee we can help you pick the perfect product! 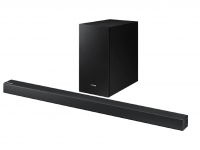 The Samsung HW-R450 is a brilliant little entry-level soundbar designed to boost your TV sound without taking up too much space. This 2.1 channel system…read more →

Sony have been in the portable music game for longer than any company in existence. They started back in 1979 with the original Sony Walkman…read more →

Everyone who exists as of right now knows who Apple are. Now we've established that fact let's talk about Airpods Pro which will undoubtedly be…read more →