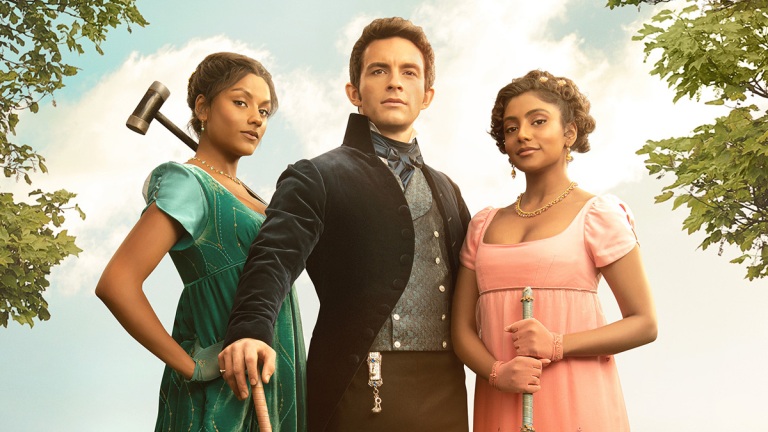 A very British affair returns to Netflix for another tumble in the bushes.

A beautifully shot show, full of beautiful people and beautiful places. Bridgerton is very much escapism into a world where the stakes are low, but libidos are high. Enter the yearly royal contest for the matching in marriage of the two most eligible singletons.

This ‘season’ as they aptly name it, covers the courtship of one Antony Bridgerton, a most wealthy and dutiful man. While portrayed as somewhat wooden, the season chips away at his sharper edges and sands down some of those rough patches, leaving a character who looks good in a white shirt when dipped in water. As it happens this is just what the newly arrived Sharma sisters might have been looking for, both are intellectual women, but all will not be fair in love and matrimony.

It is certainly commendable that the directors have gone for a more diverse cast and that diversity from other cultures is being folded in. There is after all perhaps only so much distilled ‘Englishness’ that can appeal to a global audience. The problem with the exuberant attempt to bring culture into the show however is often in the execution. While I am not of Indian descent to notice such things, it is social media that has highlighted the lack of accurate cultural references.

There is also an opportunity missed in exploring the location of India and showing some variety to the very English locations. Generally, however, the response has been mostly positive that representation in mass western media is improving, a view I share. I can also understand the views of those who find it uncomfortable in the erasure of context, as what was actually happening during English colonial times involving black and Indian cultures would not make for such light viewing.

Where I find Bridgerton at its best, is the impact of the leading female characters. While the show might not pass the Bechdel test, it does at least feel more of our time. There are female characters that are exploring enterprise, entertainment or advancement, outside of an all consuming courtship. These stories offer a more interesting backdrop. Even the Queen and Whistledown are really playing a covert game of chess with the premise of marriage.

The other source of great entertainment is fear of emotions; the leading couple certainly do an exceptional job of fanning the flames of unrequited desire. However, actors literally fling themselves against walls in horror at the briefest appearance of the evoked feelings, which at times makes for many laugh out loud moments.

Bridgerton is by no means a masterpiece, it plays shamelessly to its audience and in doing so is certainly entertaining. If you are looking for something simple and distracting, I am sure you will enjoy it. Despite my critical approach I was begrudgingly invested by the end and it certainly made me laugh on multiple occasions.