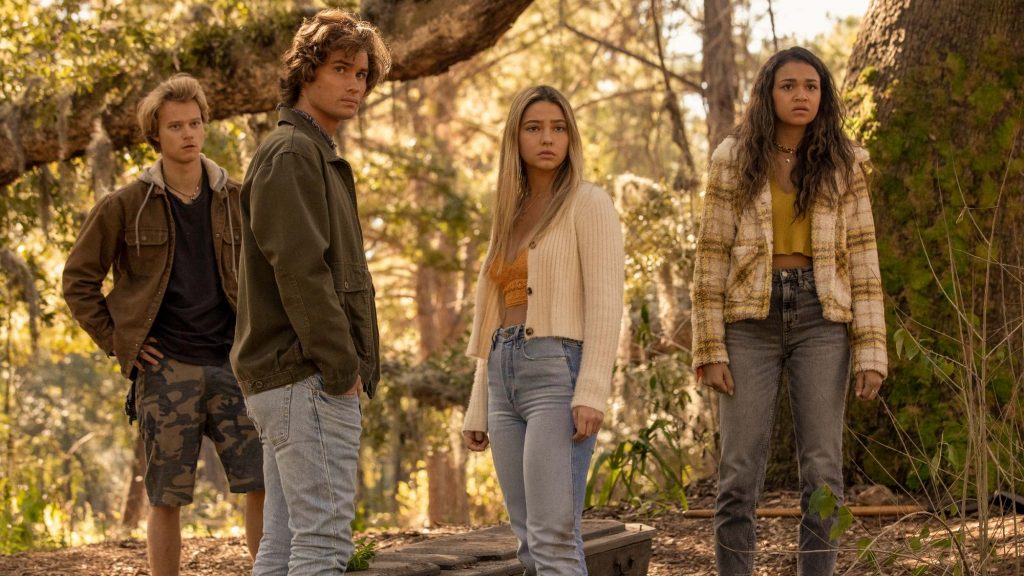 The Pogues make a dramatic return in the hunt for gold and missing friends in Outer Banks, season two.

Season one ended with the fateful stormy night where John B and Sarah disappear into the waves chased by the full weight of the law. Complete with murder, treachery and treasure there was no shortage of high drama. It is pleasing to find that the creators have managed to not only maintain the pace but even step it up. Each episode leaves you incredulous at how many story beats are fitted into such a short space of time. Missing an episode is like watching the Return of the King, straight after Fellowship of the Ring (sacrilege I know).

The Pogues are forced into some semblance of life returning to normal. The gold is gone and so is their natural leader, however they can’t fight the desire to seek justice. As they stalk the Cameron household looking for revenge, they get caught in the murky underworld of a family who will stop at nothing to get what they want. If the Camerons were not bad enough, there is a new family on the horizon as well, piqued by the murmurs of the Royal Merchant gold and with a name just as old. The addition of new characters is something season two does very well, they each bring a new threat or thread to the adventures to help keep things fresh. The number of new additions does pull some focus from some of the main character development, but depth of character is never Outer Banks’ main appeal. The antics of the street brawling, dock rat, versions of Enid Blyton’s Famous Five is really what you watch for.

Location scouts for the series clearly did their work well and came up with some fantastic sets. Ranging from sun soaked, pirate infested, Caribbean Islands like Nassau to creepy old churches deep in the swamp. There is always the sense that this show should not be as entertaining as it is, from a critical perspective that is. As a watcher you can sense the passion and belief the production team behind this seem to have. There is an ambition and scope to what they try to do that is every bit as aspirational as their teenage characters’ attempts to become billionaires.

It is interesting to see the return of smartphones to the series after the deliberate choice to remove them in season one. This was set up by a hurricane that removed power so had a limited feasible use as a plot device. The effect had shaped the story in a few ways, allowing the interpersonal bonds to be closer and more driven by dialogue and face to face interaction. This certainly delivered more connection between characters and forced developments to happen more organically. Season two, they certainly continued to be relatively un-reliant on phone use to progress the story, however, the amount they creep back in even when clearly the directors wanted to avoid them shows how much they do dominate life.

I would definitely recommend coming back to watch this new season if you enjoyed the original. It captures a sense of fun and adventure that is often missing these days. If you are happy to suspend your belief and enjoy the rollercoaster of action you will never find a dull moment in any episode. Think The OC meets the Goonies.