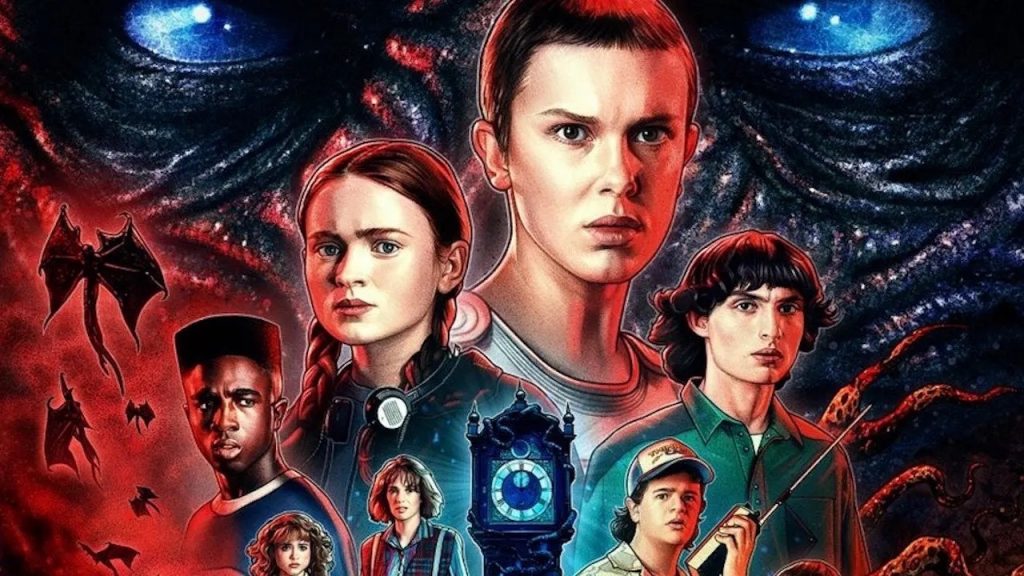 It’s FINALLY here – and over so soon. After being delayed by COVID, like so many beloved series and movies, Stranger Things Series 4 arrives on Netflix. However, after a small pause between parts 1 and 2, was it worth waiting with such bated breath?

I’m not afraid to admit that season 3 of this show reduced me to tears in the closing moments. The show may have a comedic edge to keep the pacing moving and to hold the ever present darkness and horror elements at bay when needed. But the Duffer Brothers and their wonderful cast and team know how to deliver a gut punch (or ten) when it matters to the narrative.

Season 4 picks up a year after the events of season 3. The Byers family, along with El/Eleven have moved to California to be away from Hawkins, Mike, Nancy and co, are all still in their lovely yet very cursed town. However, with the times come change, moving into high school has affected the dynamics and relationships of all of the cast, all of whom are still reeling from the horrors of the last season. Sort of to be expected watching people explode, get eviscerated, become the thrall of a tentacled smoke monster from another dimension.

The ‘Mind Flayer’ may be defeated, however a new threat from the ‘Upside Down’ always seems ready to rise. In another DnD reference, a being known simply as ‘Vecna’, has begun killing teens (it’s always the teens…) in Hawkins. And with adults asleep at the wheel for the most part when it comes to the supernatural occurrences in Hawkins, it falls to the intrepid high schoolers (and Steve, Nancy and Jonathan) to save the day/world/each other.

There’s also the matter of Hopper, arguably David Harbour managed to make him the male face of the series. However, with Hopper’s apparent death at the climax of season 3, the show had a potentially huge twist to hurl at the audience from the get go, his return, or rather, never actually having died.

However, by revealing this well in advance of the series, we all knew there would be a storyline telling about him being reunited with the others, removing one big shock that would have been fantastic to hook people in from episode 1 of the new series.

Hopper, having been effectively kidnapped from near death in Hawkins,  is inexplicably in a Russian prison in Siberia. Whilst the slow burn of his escape and reuniting with the others is not a poor story, it does feel very at odds with the rest of the story going on. Split between Hawkins, California and Russia, it is the latter segments that can knock the narrative pacing off kilter.

The rest of the story however, manages to consistently pick up speed, like a relentless sci-fi juggernaut until we reach the climax of the series, you will want to binge this series, so I would implore you to book an entire weekend to do so.

Musically, the show is unique, and to this reviewer, fantastic. The Duffer Brothers have utilised iconic music from Kate Bush and other 80’s heavyweights to help set the scene as heavily into the 80’s as possible. Be that in the aesthetics of hair, clothing and mod-cons, or the fear that DnD was a devil-worshipping cult. When it’s not a cultural lynchpin of a track, the time-accurate synths weave between positivity, utter despair or even hilarious moments between the party. When using a decent sound system to accentuate this, and the right display to show off the HDR and production value, you don’t need to worry about going to the cinema.

I could happily write individual reviews on each cast member’s performance, but it’s easier and less agonising for those reading for me to simply praise where it’s due. I.e. all of the cast. Each actor has progressed over the years of production they’ve been involved with and throws themselves into the role with their full self. Outside of some frustratingly ropey fight choreography in the final two episodes, there’s little to fault.

A special mention however, to Gaten Mattarazzo who plays Dustin Henderson. Often the sardonic comic relief of whatever group he’s in, when he shows off his dramatic chops across this series, it gets you in the feels harder than most.

The fact is, I’ll likely now go and rewatch season 1 through 4 now. So if that level of consumption of my time and limited emotional range isn’t enough to convince to you watch it, I don’t know what is.