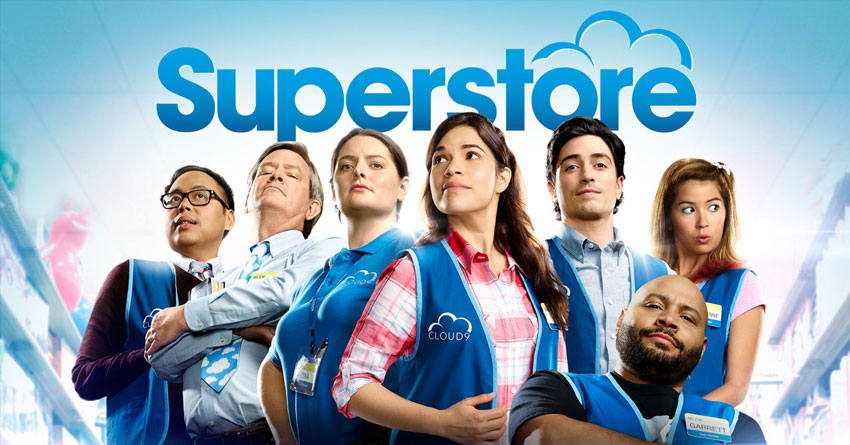 Starring Ugly Betty lead America Ferrera, Superstore offers a candid look inside a shopping behemoth which is broadly appealing as most have had an experience shopping or working in the retail environment. The fictional Cloud 9 store adds a new staple to the workplace sitcoms, but can it rival the Office or Community?

Running for an impressive 6 seasons, Superstore has certainly had success, even continuing filming under the difficult conditions of the 2020 pandemic. The most recent season has yet to air on Netflix in the UK but will be sure to be a fascinating reflection of life in an unforgettable period of time. The Supermarket/store captures a broad spectrum of our society these days. The products it sells are familiar to most and due to the size of operation they are usually one of the biggest employers in most areas. The series develops its regular characters and the stores modernisation over time and does so in a believable way.

Superstore as with most series, even the gold standard US Office, takes at least one season to find its feet. The edges get knocked off the characters as they work out who plays off each other best. The store manager is a classic example of this, initially a slapstick, downtrodden, patsy for the system, there is tangible shift in direction as this quickly becomes limiting. Glenn really comes into his own as the role of an infinitely patient and caring manager who regularly takes both barrels from each end of the company hierarchy. America Ferrera plays Amy, a long-standing supervisor who is happy in the status quo while she keeps her more draining home life in order. She is used heavily to deal with stereotypical treatment of women and Latin Americans in the workplace and it is gratifying to see her character transcend throughout the series. One of the outstanding characters has to be Dina as the mercurial supervisor with a little too much taste for power. Played by Lauren Ash, (recently Scorpia in She-Ra), Dina is great from the outset and changes very little. Her personal life and interests are filled in with some highly amusing lead episodes and recurring plot points. She reminds you very much of Dwight from The Office without the naivety and that is no bad thing!

The building in such a long-standing show also becomes part of the cast. The sheer size of the set gives the store plenty of scope for variation in setting despite ninety percent of the filming technically being around one place. The tunnels and dubious repair work from times past for example, throw up plenty to inspired episodes, helping to keep every episode fresh with a new perspective on store life. Using weather, seasons, black outs or outlandish promotions there is a surprising amount of work to keep things visually interesting for the cameras. The procession of extras through the aisles helps pepper the corner of your eyeline with subtle humour, it might be hilariously scripted odd customer behaviour, overacting or just a hardworking extra showing up in a bizarrely high number of shots. There is even the odd across the seas jibe at Brexit curtesy of a costume for a Halloween episode.

The jokes are often fairly simple, with the punchline never far away, but they do tend to hit their mark more often than not. The cast and director work hard to keep you engaged and deal with human issues that will resonate with many. I would certainly not put Superstore on the same level as sitcom greats like Black Books or Community, however it is a well done, easy watching show worth your time to switch off to.