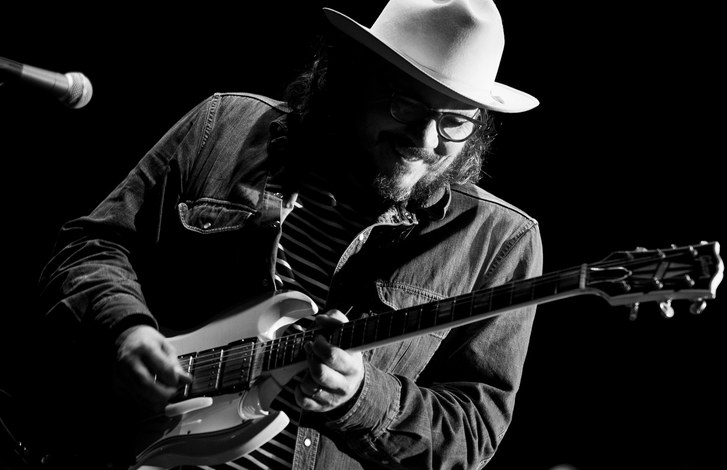 Jeff Tweedy is a 51-year-old American hailing from Bellevue, Illinois. He has been a band member and major contributor to about 20 studio albums since 1990 and involved in countless other contributions and co-productions.

His best-known band, Wilco, have been hailed as the American Radiohead, starting from alt country roots into more general alt rock and well-crafted singer songwriter boots. ‘Warm’ however is his first solo album of entirely new material.

Opener ‘Bombs Above’ is slightly Lennonesque in tone and lyrical feel. It has an end of life feel; ‘I leave behind a trail of songs’ but is brief and gives way to ‘Some Birds’ with a slightly more straightforward country rock feel. Both songs so far though are bedded upon fairly straightforward guitar bases, there is a Beatley feel though, in lyrical refrains ‘I’d love to take you down’ and in some of the lead guitar work. ‘Don’t Forget’ is a downbeat top tapper with a deathly specter about the lyrics (‘We all think about dying’ and ‘The willows bending by the graves’). It’s very well crafted, by an artist who know his identity and feels he has little to prove. ‘How Hard It Is For A Desert To Die?’ unsurprisingly does not lift the mood but carries an elegiac beauty over a simple song built over a Plastic Ono Band hollow type drum beat. It’s incredibly endearing.

‘Let’s go Rain’ is a fairly straight country number pleading for rains of Noah type flood levels to cleanse the Earth once more. The album has a yearning feel to it’s songs, a searching, a feeling of life being viewed from a distanced perspective. ‘I Know What It’s Like’ repeats a lyrical picture from ‘Some Birds’ of a twin observing one’s self from the other side of a window adding a huge feel of introspection. The musical backing is at odds though, generally warm and soothing, soft and comforting. ‘Having Been is no Way to Be’ has a touch more bite and a chorus that signs off with ‘And I’m sorry when you wake up to me’. It’s not drenched in self-pity, more a heavy sense of apology and at the song’s end Tweedy is still there for the song’s muse to wake up to. It’s a definite album highlight.

‘Red Brick’ follows on as a song of hanging onto something, a relationship or addiction, and has a dirty ‘White Album’ feel to it and flows seamlessly into the softer ‘Warm When the Sun Has Died’ (the two songs are pretty much really one song). Closer ‘How Will I Find You’ is gently strummed mantra containing only the words ‘How will I find you, I don’t know, you will know’. Yet the album far from lacks purpose, in its realisation it’s very focused.

‘Warm’ is a brief record, drenched in searching yet displaying emotional warmth despite its viewing in from the outside perspective. It has me in mind of Lennon’s early solo records very much in musical, lyrical and vocal intonation yet exists very much in its own right. In fact, it’s one of my favourite American/Americana albums of the year. I heavily recommend investigation.