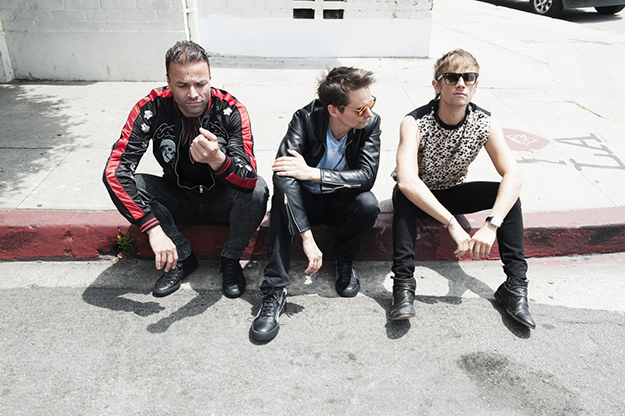 Muse have steadily moved to the point where they are releasing the eighth studio album of their career. They’ve never made a duff album, but have they ever made a classic, career defining one, like The Joshua Tree or Violator? Arguably not…

The Simulation Theory blasts open with “Algorithm”, a scene-setting cinematic intro presenting the album’s theme, a world where we live in a Matrix-like controlled simulation environment with talk of going to war with the controllers/creators. It’s not as ominous musically as that sounds and “The Dark Side” further sets a scene with its depiction of paranoia and depression. The music is typically chest thumping Muse fair though, which lodges a sense of optimism or even euphoria that is at odds with the lyrical content. “Pressure” is riff laden with echoes of “Supermassive Black Hole” to it. It’s pretty excellent actually. “Propaganda” is a song about looking at something in very close detail…. Or possibly about lies and false promises in a relationship. There’s a heavy Kraftwerk feel to the heavily treated tile phrase in the track which is laid over a typically funky Muse beat with flashes of Prince all over the place. For all the weightiness of the music’s presentation lyrically the songs are brief, often rhythmically repetitive, and fail to hit the depth that’s maybe being aimed for. “Break It to Me” is more rallying against the system and deploys a fantastic percussive rhythm and beat. “Something Human” sounds like Erasure very much, and tackles homecoming following a lengthy tour, a focus on returning to family life after a spell travelling and working. It’s quite poppy but still very much Muse.

“Thought Contagion” is built around bass and swelling keyboards with multi-layered backing vocals, and deals with the spread of ideologies whether true or false, good or evil in todays connected world, ‘You’ve been bitten by someone’s false beliefs’ tells the story in a single line really. “Get Up and Fight” is a call to arms to rise and defeat the system, the lies we are fed by governments. It features Tove-Lo and is a great slice of modern pop meeting with alt rock sensibilities. “Blockades” carries on the struggle though there’s hints of relationship battles and worthiness in the words too. It opens with a synth pattern before once again rolling through on heavy percussion with a drop then rise chorus. “Dig Down” searches for the strength inside to overcome, and displays Muse’s oft employed Queen mimic button to decent effect and is one of many anti-Trump songs that the world of rock has come up with in the last couple of years (‘When God decides to look the other way and a clown takes the throne, You must find a way’). It has a touch more compassion and more of a gentle touch than most of the music here and therefore becomes a standout track by virtue of standing out in the crowd. “The Void” closes the album as a final act of defiance, and a call to rise of your own accord but to band and stick together too so the world can be become a better place. It’s glacial opening thaws as the track progresses but after a strict rhythm in its middle section becomes glacial and ominous again and it slumps to a halt.

The UK deluxe version contains five remixes. This would normally mean you’d listen to them once then use the skip button on further listens, but these remixes avoid that by retaining the proper shapes of the songs and offering a different take on their instrumentation and arrangement rather than chopping them up and splicing in ill-fitting dance beats that most modern ‘rock’ remixes seem to be in favour of. These versions are just as valid as the album proper versions, possibly more interesting, maybe even an improvement, offering greater emotional depth and attachment in most cases. “Propaganda” particularly benefits, its Prince tips of the hat coming to the fore gloriously. You feel if the band had pushed the envelope a little further in the way the remixes suggest then the album would’ve been much more memorable as a whole. It’s another fine Muse album for sure but I still don’t feel they have produced a set that they’ll be remembered for long after they’ve gone, yet, despite this they maintain their status of being a great modern rock band.