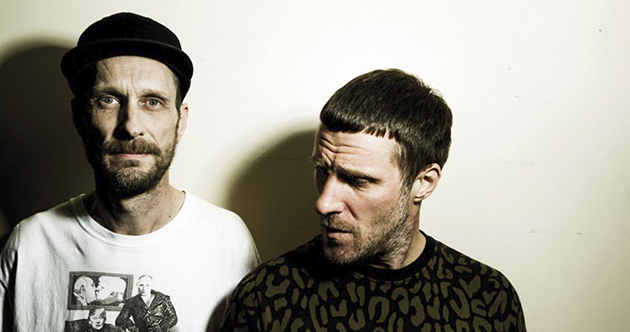 Perhaps one of the most appropriate bands of Britain’s current state, is Sleaford Mods. Looking exactly like the latter half of their band name comes their caustic sound of electronic punk. Returning with their eleventh studio album Eton Alive, will their anti-austerity rant-raps still be relevant?

With band members hailing from the 1970’s, lead member Jason Williamson has clearly taken in the influences available to him in his formative years. With sounds ranging from hip-hop beats you might find on a Wu-Tang Clan B-side, heavily accented singing from mod-subculture and an attitude from the ‘Oi!’ sub-genre of his childhood years – there’s nothing quite like this angry duo from Nottingham.

Williamson’s first rant (read as “track”) of the album is “Into The Payzone”. With a gritty, growling set of vocals over simple synths and samples of self-scan checkouts – Williamson isn’t attacking Tesco here, but the more overarching theme of capitalism… and a little shot against hipsters with vapes.

Some of the tracks are FIERCELY British, with anger targeted at things so specific, they’re likely to be met with nothing but confusion as soon as the track crosses the sea. “Policy Cream” takes aim at council policies – for example, should Williamson only have one brown bin, because he’s got two. Well, to quote the lyrics directly “what the council don’t know won’t hurt ‘em!”. Also, the quintessential British over-politeness–not being able to complain about roadworks, as they’ll have a go at him in return.

In “Kebab Spider”, there’s a brief shot taken at those who participate in Channel 4 documentaries with the angrily spat line of “thy indy documentaries ain’t highlightin’ no pain – some channel 4 documentaries are only in it for the fame”. Williamson’s almost rhythmless bars are forced into a time signature by the basic lo-fi beat that is looped repetitively under everything. This might sound like a criticism but this angry duo somehow make it work so well. It’s not all total unkempt anger however. In a far more even-tempered track, “When You Come Up To Me”. It’s a change of pace amongst the opening tracks which, whilst full of fire, can get fatiguing after a solid 15-20 minutes of shouted anger at your local council.

“O.B.C.T” gives us our first taste of guitar in the album – a lazy little cloud of it that is as easily missed as not as the thick bass fog takes over most signs of melody. This however, takes a serious second place to one of the strangest lyrics of the album – which is saying a lot. I’m still not sure how to provide context to it amongst the general socio-political vitriol of the rest of the track but somehow the line “until the mask falls off – and what you’re left with is Sesame Street – Big Bird!” actually fits in well amongst the rest of the track – even the kazoo solo. 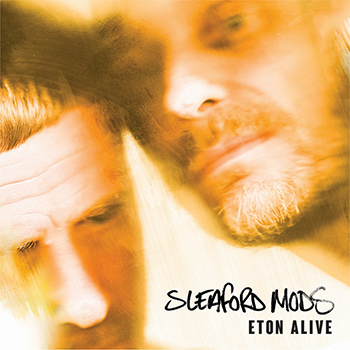 The group has been, and are still often derided as simply being an ‘angry middle-aged white man’ group; a leftover from the era of The Sex Pistols or perhaps more accurately The Fall after Mark E. Smith’s death. However, in amongst the anger, there’s more complexities than the surface might belie. In one of the slower tracks, “Top It Up”, the more typical ‘British masculine’ identity is shown to be much more than just simmering bitterness or worse, the ‘skinhead’ image. Between Williamson’s more typical married father-of-two identity (albeit with a very flamboyant stage presence) and openly gay member Andrew Fearn – they often manage to paint a far more complex picture of ‘the British male’.

They even move away from the opening tone of the album, as though we’re journeying into their identities more. As the politics give way to social tones and these to identity themes, by the end of the album they’ve approached mental health. In the closing track, “Negative Script”, the lyrics from “I favoured being out of it, but got tricked by my mind” and “I don’t wanna flip the page, of my negative script, that cornered my young age, and ran away with it” seem to reveal the issues of anxiety and depression in a younger Williamson – something he’s now not wanting to address.

Ultimately, this album, when heard to the end could be seen as an important dialogue for men in our current age. Yes, the political message Sleaford Mods have always carried is still here, but their rage feels tempered by a bit of resignation to the situation – and we’re left with a more personal and introspective album. To this reviewer, this is just as, if not more important than railing against the establishment.