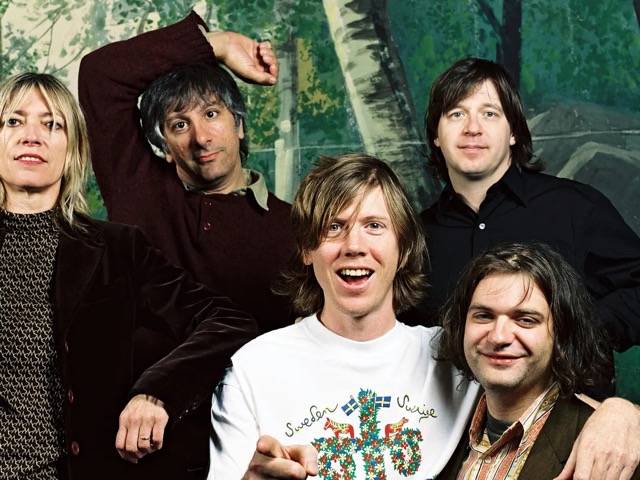 Despite being taunted with what could be seen as a possible reunion, Sonic Youth are not back together. However their new release, In/Out/In, manages to give us some unheard tracks all the same.

Yes, we all know that Sonic Youth have disbanded and are in no state to return since the break-up of the band members Kim Gordon and Thurston Moore, unless they ever manage to reconcile. However, In/Out/In is still technically a new album, despite its short track listing. The five song release contains the rare (well… not now it’s published) and unreleased songs that never made it to the public from the last decade of their time together.

This isn’t an album for those not already aware of Sonic Youth. The five tracks are all pushing the boundaries of the already broad territory the band were capable of occupying, be that the shrieking experimental material that attacks everything that is, well…music; or the gorgeous melodic works that are more accessible.

The tracks are all around the ten minute mark (with one exception) and each of them are mostly a raw and untempered look into the creative process behind one of the most unique ‘rock’ bands in living memory. This does in fact include ‘In & Out’, which is effectively a sound check performed in a previous band member’s basement studio. I mean, you can basically hear that one crying out to hit the UK Top 40.

The exception previously mentioned is the central track (and arguable lynchpin of the album) ‘Machine’. Taken from the production of one of the band’s final songs, ‘The Eternal’, the track is oh so close to being a genuine song, lacking only the final touches to turn the rocky riffs into a track ready for release. It screams and roils with potential, still managing to sound like Sonic Youth at their best.

The whole album may feel formless, but it is held together by an almost unsettling static drone across each track. It’s not exactly a concept to hold on to, but if you need a constant to grasp as the album hurls you around through the maelstrom of sounds, Kim Gordon’s sometimes wordless vocal melodies and furious drums, mostly battering the set of toms.

Somehow, ‘Out & In’, the final track, manages to pull together some semblance of a legitimate production value for a moment, then the vague apparition of a song is torn about by raw guitar sounds not a million miles away from perhaps their best known track ‘Kool Thing’. Like most of the album, it shows us what might have been if the band had reached out and grabbed one of the hundreds of strings of potential that the album presents, but asks you draw your own conclusions.

This album may be pure chaos, but if you’re a fan, or teetering on the fence about your opinion on the band, then throw yourself into the album. You’ll be rewarded with a wonderful view beyond the veil that created one of the most fascinating rock bands of all time.