In the third instalment of the Has Fallen film series (is that what we’re calling it?), Gerard Butler’s Secret Service agent Mike Banning is framed for attempting to assassinate President Trumbull (Morgan Freeman) on behalf of Russia. While on the run, Banning comes across his long-lost father Clay (Nick Nolte), and the pair must try and unravel the conspiracy before Trumbull is killed and the US declares war on Russia.

Gerard Butler is a strange action star. One moment he is providing touching voice work to Stoic the Vast in the How to Train Your Dragon series, or putting on a raw performance in last year’s The Vanishing. The next moment though, he is the most reliable actor you’ll see set to appear in distinct trash. In the last three years alone, Butler led the hilariously awful Gods of Egypt, the horribly dull Geostorm, and the utterly forgettable Hunter Killer – all of which were box-office flops. And yet, 2013’s pretty decent Olympus Has Fallen, starring and produced by Butler himself, spawned a film series that is now on its third entry. Despite having a speckled career that could only rival that of Nicholas Cage, Butler keeps some kind of a draw for audiences despite being a prince of the turkeys. Even though the first sequel London Has Fallen was a drab thud, we’re still seeing Butler come around for a third go, and while it’s still not particularly great, it has its moments and I’m sure will entertain his fans.

To start with, there’s Butler himself. More so here than his other actioners, and without sounding harsh, he looks a bit older and less fit here, and to the credit of the movie, it actually acknowledges this as part of its plot. Banning is suffering from physical and mental exhaustion from years in his profession, and to have an escapist action movie acknowledge that its macho lead is suffering in this way is very, very rare. Unfortunately, it doesn’t really factor into the action or story that much by the film’s end, which is a shame because it perfectly sets up that opportunity for tension. Still, it was good to see Butler embrace this narrative somewhat, rather than go for the oft-taken route of action movies produced by their stars whose primary goal is to look insuperable (looking at you Vin Diesel).

Regardless of such a hint of difference, however, the rest of the movie is rife with all your favourite tropes: a doting wife who stays at home with the baby, an old friend who tells stories about our hero at dinner so the doting wife can dote some more, a looming paper-pushing job that our lead isn’t ready for and, of course, a mysterious faceless villain disguised by a distorted voice. To shake the proceedings up a bit, Butler eventually runs into dad Nick Nolte, though without any narrative reason for doing so this father-son pairing feels bizarre. It does gradually attempt to retroactively justify itself though, with some surprising thematic approaches to war and masculine maturity. 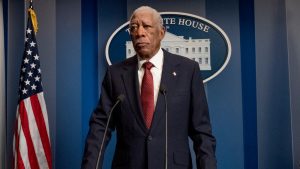 Both Nolte and Morgan Freeman are welcome presences who aren’t in the movie nearly enough. With the posters advertising a pairing between Butler and Freeman, and the trailers promising a second team-up of Butler and Nolte, both instances disappointingly only happen for a few scenes. Butler has good chemistry with both of them, and it feels glaringly obvious that the only reason the pairings don’t happen more (or eventually become a trio) is because two-thirds of the crew don’t really want to spend that much time filming (Freeman is bed-ridden for a large portion of the movie). Still, they give good performances, Freeman delivering his trademark speeches and Nolte having some genuinely funny and sweet moments. Perhaps it was the script that used them sparingly, and not the script working around the actors, but I can’t help but put on my tinfoil hat and imagine that the production crew would have done more with these acting legends if they could.

Speaking of production, despite some really nice sound design in an opening drone strike, this is where the film falters most obviously. There is some incredibly naff CGI throughout, in particular one of the worst green-screen effects I have seen in a cinema-release for a while, wherein Butler and co are running in front of a wall of ‘smoke’ that is so unconvincing it actually had the group sitting next to me laughing. As per in budget-saving scenarios, most of the action happens at night and at times you simply can’t see the action at all, worst of all during Banning’s early fugitive scenes. The dialogue doesn’t always fare much better either – “President Trumbull’s top guardian angel has fallen tonight” utters a newscaster clearly concerned about you still pondering the title.

However, with those retroactive thematic developments I mentioned earlier, the film does eventually head to a fulfilling conclusion that is far from the warmongering mentality it could easily have become. Without spoiling anything, it does actually make the film as a whole sit better in retrospect, tying nicely with Banning’s personal struggles. It is certainly less gloomy than its predecessors, actually embracing more of a B-movie feel throughout that works in its favour, and Butler’s. By no means entirely great and by no means particularly bad, Angel Has Fallen sits in the middle of the Butler-quality spectrum.