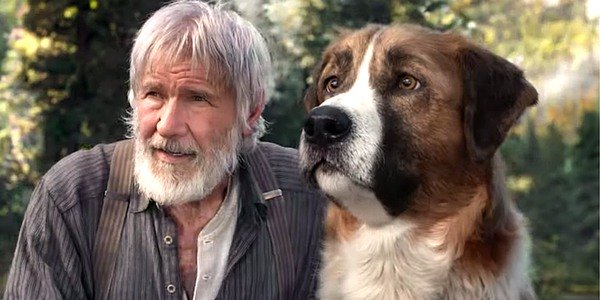 Buck is a troublesome but charming canine, who after wrecking a family dinner and generally causing trouble is dognapped and taken all the way from California to the Yukon Peninsula (Alaska) where he starts a new life as a working dog and gets closer to nature than he ever expected.

Despite his presence front and centre on the poster make no mistake, Harrison Ford isn’t the star here. In fairness that’s not always a bad thing, the star of the show is undoubtedly Buck the dog and his adventures into the wilderness. Buck for the most part proves to be a worthy star, the CGI has been noticeably improved from the trailer and although he doesn’t gel well enough with the live action to be entirely convincing he’s a more than cute enough creation to tug at the coldest heart strings. He’s an impressive piece of effects work with some genuinely convincing animations and some truly lifelike fur, yet another example of SFX that shows we can’t be far away from photo realism once filmmakers can fully integrate the effects with a physical back drop.

Before you start to worry that the film relies solely on a CGI creation it should be said there is a decent mix of human characters to keep you engaged for the running time, who for the most part put some decent performances. Harrison Ford as John Thornton is basically just Harrison Ford, which for material this light isn’t a problem and he’s watchable throughout. Dan Stevens is clearly having the time of his life with a delightfully OTT performance as the villainous Hal who is adamant John Thornton is out to steal his gold. Credit should also go to Omar Sy who gives a performance every bit as charming as Buck himself, playing Perrault, Buck’s second owner and post master who drives a dog sled across the Yukon.

The film is genuinely exciting in places – the story follows Buck as he ends up further and further away from his spoilt upbringing and bounds along at fair old pace, jumping from location to location. From daring training escapes to breakneck dog sledding it’s fair to say that you won’t be bored. The avalanche scene in particular will have you on the edge of your seat and the first half of the film rockets along quicker than the dogs can drag a sled.

It’s a shame then that the pace falls away towards the end and the film starts to lose some of its energy, the Harrison Ford focused last third is entertaining and brings some emotional heft to proceedings but it’s just not as enjoyable as the pacey adventure the film started out as.

Call of the Wild certainly delivers an entertaining enough ride to be worth your time even if it may not stick in the memory for too long after you’ve watched it, that being said there are certainly worse family films out there and even the older family members should have a good time with this despite its occasional short comings.