A hard hitting drama from director Nadine Labaki, Capernaum finally gets a UK release having won the Jury Prize at Cannes last year but does it deserve the praise?

Having been convicted of stabbing a much older man, 12 year old Zain (Zain Al Ralfeea) takes the bold decision to sue his parents for neglect and squarely blames them for his terrible upbringing. The bulk of the story is told in flashback and we see Zain’s relationship with his sister before he leaves home and encounters young Ethiopian refugee Rahil (Yordanos Shirfew) and her baby Yonas (Boluwaife Treasure Bankole) and develops a bond with the family.

The first thing that grabs you is that the cinematography here is outstanding. Whilst the film often opts for a “shaky cam” documentary aesthetic, it never stops the film from being staggeringly beautiful throughout. The combination of styles really draws you into the film and serves to make the city of Beirut as much of a character as the young protagonist. 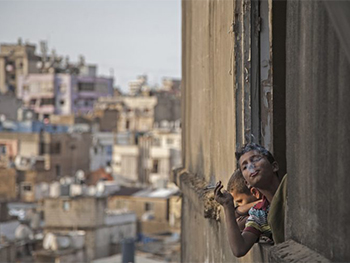 Whilst the film looks fantastic, it’s fair to say that the star of the show is the young Zain Al Ralfeea, you will be hard placed to pick out a better performance from a child actor in recent memory. His turn as the troubled Zain is faultless, he manages to imbue the character not only with a sense of vulnerability but also with streetwise smarts and a believable impression that (in spite of his young years) he isn’t someone to be pushed around.

The supporting cast are also superb, despite a large proportion being pulled from other backgrounds you will be struggle to work out who has acting experience and who doesn’t but they really draw you into the film and it certainly adds authenticity to proceedings.

Despite the bleak subject matter, Nadine Labaki directs with such a deft hand that for all the film’s heart-breaking moments there are some uplifting ones as well, Zain’s bond with baby Yonas is the beating heart of the film and should give at least a glimmer of hope that some good can come from adversity. That being said the moments of levity are brief though so don’t go in with any expectations that this is a ‘feel-good’ film, it’s not and shouldn’t be. Labaki herself stated that she wanted to open some eyes to price of conflict and this film does that to superb effect.

Capernaum is a superb film on every level and one that shouldn’t be missed, this sits as early contender for one the year’s best films, find it!