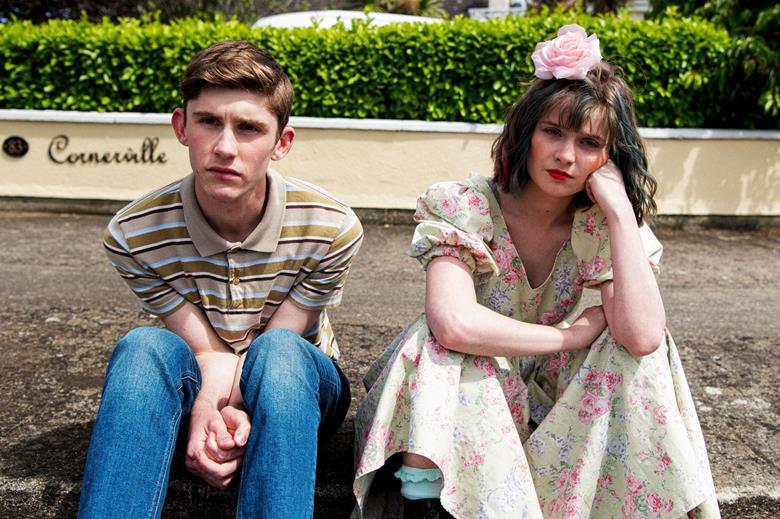 In 1990’s Ireland, Eddie (Fionn O’Shea) and Amber (Lola Petticrew) are two closeted teenagers who form a fake relationship to save themselves from school bullying. As the charade progresses, however, the pair struggle with embracing, or suppressing, their true sexuality.

Writer and director David Freyne’s Dating Amber (originally titled ‘Beards’) is a heartfelt exploration of adolescence and sexual identity, one that successfully manages to balance a delightful tenderness with raw emotion. It marks another fantastic entry into the last decade’s increasing output of LGBTQ+ love stories, and is another example of how the marketplace is evolving to provide those who have gone far too long without cinematic representation the platform they rightfully deserve. It easily joins the likes of 2014’s Pride, 2016’s Moonlight and 2018’s Love Simon (to name but a few) in the ranks of excellent movies exploring LGBTQ+ identities and the struggles of their everyday lives. By displaying both the internal and external battles that gay teenagers face in the high school arena, Dating Amber manages to turn a sweet comedic premise into a profoundly emotional experience, one that I found myself completely moved by come the film’s end.

Lead actors Fionn O’Shea and Lola Petticrew are at the core of this success, the pair having a tangible chemistry together but both with their own unique perspectives and emotional complexities. I genuinely feel like I knew Eddie and Amber, and this is a credit to how natural and believable Freyne’s dialogue is and how O’Shea and Petticrew perform it. I felt an immediate connection to the pair, understanding their decisions even in moments where they act irresponsibly. Their performances are some of the best I’ve seen all year, a wonderful convergence of the written material being both supported and intensified by the actors. Petticrew’s energetic portrayal of Amber makes her delightfully fierce in face of the adversity she regularly faces, and watching her transform her struggle into a fiery independence is inspiringly depicted. On the opposite side of this is O’Shea’s Eddie, the actor displaying an astonishingly raw performance as the tragic foil to Amber. Eddie is subjected to incessant mockery and interrogation by his desperately masculine peers, and watching him be so thoroughly in denial of his true identity is heart-breaking. O’Shea’s portrayal of a teenager in pain is palpable – he makes Eddie thoroughly sympathetic even when his refusal to accept himself leads to hurting others. The world he has grown up in is in total denial of his sexuality, and his relationship with Amber forms the basis of what could finally be the teen’s first semblance of acceptance. Together the pair are charming, funny and emotionally resonant, and have stuck with me long after the film’s rather ambiguous (but touchingly perfect) ending.

They are helped, in no small part, by the somewhat unique structure of Freyne’s script. The central premise of Dating Amber not only arrives rather quickly into the runtime, but approaches its nadir far sooner than I would have thought. This may lead to contention amongst viewers; some may feel the film has an odd structure as a result of Freyne’s choice to take the story this way. I do feel that the film suffers slightly with pacing, the decision to barrel through the set-up leads to a lag about a third of the way through. Though noticeable, I found that it didn’t distract from the overall experience, rather turning what could be a predictable premise into something more naturalistic and lively – I genuinely didn’t know where things would go. That assists the film’s characters beautifully, echoing the uncertainty and unpredictability of the teenage experience and making Freyne’s world more tangible. The script could have benefited from a bit of fine-tuning, and while I don’t take much issue with the pacing I do feel that there are a few rough edges in tone. Sometimes, Dating Amber has the opportunity to take a situation either comedically or seriously, and Freyne often braves the tightrope and tries for both. I admire the ambition, and often he hits the beat right, but a few scenes are a little confused. If I were to have any criticism with the film it would be here, but I could just as easily chalk this down to being like the structural decisions: done by choice, and designed to echo the more real experience of closeted teenagers.

While the characters and their story are the film’s core success, Freyne and cinematographer Ruairí O’Brien are sure to decorate it with a beautiful look. They successfully capture the grey doldrums of the Eddie and Amber’s high school world, but embrace the contrasts and colours of the pair’s time together, especially when exploring Dublin’s gay night scene. Weaved throughout are many gorgeous shots of the Irish countryside, the landscape itself at odds with colour as green fields and trees clash with amber tinted skies, making it the perfect setting for Eddie and Amber’s escapades together. The film also boasts an excellent supporting cast, with Sharon Horgan and Barry Ward as Eddie’s quarrelsome mother and father, and Simone Kirby as Amber’s widowed mother. Each give top performances, showing three very different types of parents.

Though a little rough around the edges, at times battling an ambitious approach to structure and tone, Dating Amber is an affectionate and moving experience. It’s sure to become a new, emotionally rich favourite for many LGBTQ+ viewers, and an impactful story for others who are on the outside looking in. With a full heart at its core and headed by two outstanding performers, Freyne’s film is one of the year’s best so far.