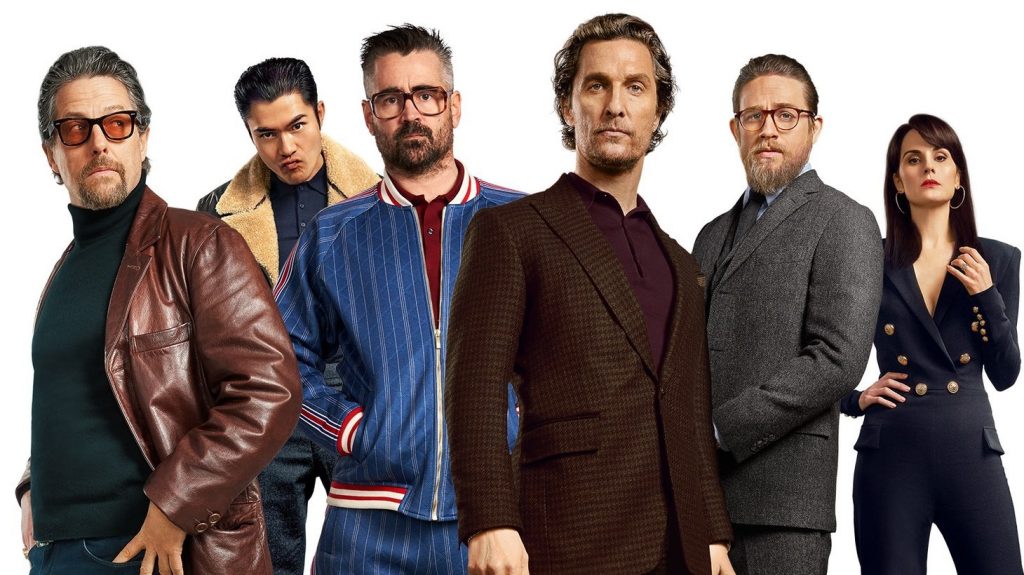 Cannabis kingpin Michael Pearson (Matthew McConaughey) decides to sell his empire in hopes of a quiet retirement, but his decision spurs schemes and blackmail from those who want to challenge him. We missed Guy Ritchie’s latest crime caper at release, now it’s available on demand, how does it stack up?

When it comes to critical opinion, Guy Ritchie’s filmography could not be more varied or disputed. Lock, Stock and Two Smoking Barrels and Snatch remain British classics that cemented his style. But then came Swept Away, Revolver and RocknRolla which go from critical panning to being totally forgettable. Then came more mainstream outings with the two Robert Downey Jr Sherlock Holmes movies, which went from being negatively compared to BBC’s Sherlock when they released, to now being fondly remembered and often compared favourably in contrast to the BBC series. He succeeded these with the underrated The Man from U.N.C.L.E, which has since garnered a loyal cult following, before regressing again with the derided King Arthur: Legend of the Sword. Last year he directed the most un-Ritchie movie ever with Disney’s Aladdin remake, and now this year brings him full circle, back to gangland with January’s The Gentlemen. Some have called it a return to form and a thrillingly fun crime romp, others a dated and crass dose of unwanted nostalgia. Where do I feel The Gentlemen falls on the Ritchie-spectrum? Somewhere in the middle, towards the top. It’s a good, fun, twisty ride throughout, provided you’re already in-tune with its tone.

Getting my main criticism out of the way first, I was surprised by how little The Gentlemen featured Ritchie’s whip-crack camera techniques and fast editing that usually makes for his uniquely impactful visuals. The Gentlemen is by no means a boring looking movie – the lighting and blocking is often very effective – but perhaps he got it all out of him in King Arthur, which overused these methods to obnoxious effect. The Gentlemen isn’t as reliably exciting in its visuals as the Sherlock Holmes movies, or Lock, Stock and Snatch, nor is it as colourfully stunning as U.N.C.L.E was. It has a few text splashes and at one point ‘rewinds’ a scene, but very few other quirks that distance it from other modern films. It’s odd, because everything else about The Gentlemen is Ritchie returning proudly to his core sensibilities.

These sensibilities are primarily in the plot, which concerns the British criminal underworld and their exploits surrounding the sale of a cannabis empire. Like his other movies, Ritchie directs and misdirects his audience through a twisty plot, this time hinged on the brilliant idea of unreliable narration by a dodgy private investigator, Fletcher. Played fantastically by a totally off-type Hugh Grant, Fletcher is a brash, camp, film-loving storyteller who bobs and weaves us throughout the tale as he uses it to blackmail Pearson’s right hand man Raymond (Charlie Hunnam). Fletcher has been hired by a sleazy tabloid, thinly veiled in its name ‘The Daily Print’, to get dirt on Pearson. Not out of public service, but purely because Pearson refused to shake the hand of the paper’s editor ‘Big Dave’ (Eddie Marsan). On its surface, The Gentlemen is squarely about the entertainment of watching these gangs battle it out, awaiting who will eventually come out on top, and to what extent the slimy Grant can navigate his own dangerous game. On this level, The Gentlemen will surely entertain most fans of the genre, even though its plot, disappointingly, ends on a predictable reveal based around a piece of information mentioned about halfway through, that is then oddly unmentioned until the film’s end.

If The Gentlemen is about anything deeper, it’s clear that perhaps Ritchie is letting off some steam for his hatred of the tabloids, possibly still holding some animosity for when the press reported heavily on his relationship with Madonna in the 2000s. The Gentlemen mocks the world of reporting amusingly, and a lot of its crude and outdated elements can be argued as being from the perspective of its spin-driven narrator. This is not to undermine the arguments of other critics, however, who have pointed to the film’s casual racism as woefully outdated and, indeed, it is odd to see a film with such an attitude released in 2020. When seen from the viewpoint that this is a film about grimy people, told from the perspective of an immoral man, it just about gets away with it to me.

That said, even though it’s a film about criminals, if this kind of attitude understandably offends you then I wouldn’t recommend watching The Gentlemen. To me, the film seems to primarily be about the folly of young upstarts, as throughout the film we see the younger generation try and fail repeatedly to undercut their superiors. At the same time, it appears to believe that the law of these kings and queens balances on a knife edge, and it ends ambiguously enough that a sequel would be intriguing in this regard. Neither the director’s worst nor his best, Ritchie’s latest gets by on its winning cast, fun story and sense of humour. It is certainly not for everyone, frequently feeling like a film from a time gone past, but that may well be exactly what you’re looking for.