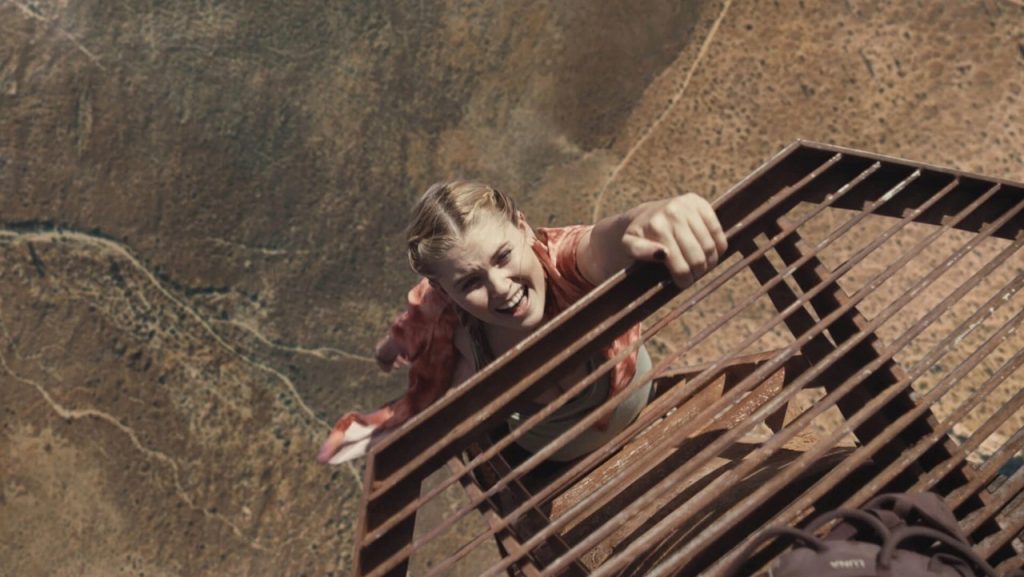 A fear of heights is often confused with a fear of falling. But if you are immune to both, then Fall is the film for you. A non-stop thrill ride that will make you grip your chair tightly just to fend off the vertigo.

The film follows Becky (Grace Caroline Currey) an adventurous climber. Who after the tragic death of her husband in a climbing accident sends her into a spiral of depression. Her friend, Hunter (Virginia Gardener) intervenes asking for help with some Instagram fame by climbing a 2000ft abandoned radio tower.

The question is what do you do when at this height when the top 200ft of the ladder falls off? You can’t jump, can’t climb down or call for help. What follows is an intense survival mission with the characters attempting everything, but with failure after failure, the desperation starts to kick in.

The minimal cast helps focus individual performances, which for a group of virtual unknowns is impressive (Grace was last seen in Shazam! and Virginia previously starred in Project Almanac). Their once peachy relationship starts to disintegrate when revelations come to light, not just about their present perilous situation but also ghosts from the past (which I found a tad cliché) However, without spoiling anything, the weight of these revelations give some powerful meaning to how the film unfolds.

Jeffrey Dean Morgan makes a criminally short cameo appearance as Becky’s dad. Even though he is barely used, Morgan eats up every morsel of his screen time. The role of a desperate father trying to reconcile and reconnect with his daughter, is a role he nails without eclipsing the two lead actors.

The tower itself is based on the KXTV/KOVR Tower in California, which (for obvious reasons) would be impractical to film on top of. So instead they built just the top of the tower on an actual 2000ft cliff, giving the audience views that are stomach-churningly real, and lend the film an amazing sense of scale and perspective. The lack (or minimal use) of CGI makes you feel right there with the characters, and I imagine the sense of peril on the actor’s faces is not entirely fake, adding an extra layer of believability.

However, one question I have is I am not sure how a phone can last 3 days and nights without needing to be charged? So reality does stretch to serve the plot on some instances. Along this line, they can’t make a phone call due to the height they are at however, I am fairly sure 911 still works without a signal.

I was sceptical about this film when I heard about it and also when I saw the trailer. I thought, “Here’s another pseudo thriller film!”. So I was pleasantly surprised when I found the film to actually be an enthralling watch that kept me entertained throughout. It may seem that there wouldn’t be much to keep an audience enthralled when the film is set on a roughly 2m square section of metal, but… it just works!

The film has many twists and turns that gripped me throughout, and definitely made my stomach turn at points. Certain unrealistic and improbable events do hamper the plot slightly, but doesn’t get in the way of the thrill ride. For a premise that seems so deceptively simple, I’ve never felt such a keen sense of threat from a movie of this type before. If you’re a real adrenaline junkie, then you’re really going to ‘Fall’ for this film (sorry).