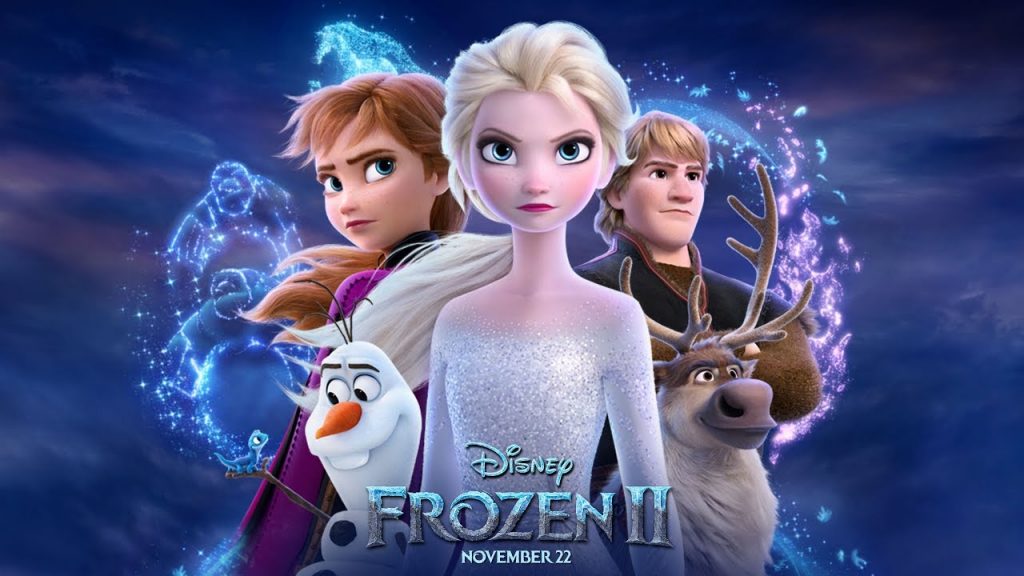 Elsa, Anna, Kristoff and Olaf journey into an enchanted forest to find the source of a mysterious siren song only Elsa can hear. As the group ventures deeper into the unknown, dark secrets about Elsa and Anna’s lineage and the history of Arendelle come to light.

With the first Frozen being an unbridled cultural phenomenon, critics and audiences alike knew that a sequel was inevitable. Not only was the film itself a smash success, but the proclaimed ‘Frozen Fever’ of the time saw unprecedented levels of merchandising for a recent Disney animation; toys, dresses, spin-off short films (one even called Frozen Fever) and of course that chart-topping soundtrack, all accumulated to make Frozen inescapable for quite some time, paving the way for Disney’s renewed independence in animation away from Pixar. Yet, while Frozen II seemed so certain, for myself it represents a notable shift: Disney princesses don’t normally get theatrical sequels. They got a happily ever after, and then went straight to DVD or TV for further (cheaper) adventures. My personal favourite Tangled got the sequel cartoon show treatment, while older classics like Beauty and the Beast, Cinderella and Mulan each got straight to DVD sequels (of wildly varying quality). So how does the first truly theatrical Disney Princess sequel fare? Is it a sweeping adventure that lives up to its legacy, or closer to the awkward follow-ups of princesses-past?

From a visual standpoint, Frozen II manages to up the ante to dizzying heights. Computer animation has progressed even further from that seen in the first film, with even more detailed textures, lighting and colours. My acclaim, however, goes not only to the advances made by the film’s animators, but to how directors Chris Buck and Jennifer Lee utilise these developments. Frozen II surprised me immensely by its frequently mesmerising, almost psychedelic visual imagery. While the main setting of the enchanted forest isn’t anything especially striking, the visualisation of Elsa’s growing powers and the abstract, elemental world they are connected to is nothing short of wonderful. Frozen II features an ice queen riding a horse made entirely of water across a dark ocean, and renders each frame like an absurdist painting. One later musical number is set almost entirely against a pitch-black backdrop, the sparks of colourful magic deliriously decorating the frame in a way not seen since Dumbo’s pink elephants. Even a musical sequence inspired by 80s power ballads fits with the film’s unexpectedly experimental visual palette while being hilariously unconventional. As a feast for the senses, Frozen II is a success.

As a narrative that makes much sense, however, Frozen II unfortunately fumbles. Though it starts intriguingly, it begins to lose some steam towards the halfway point, and when it eventually reaches the climactic reveal of a much aggrandised truth, the momentum and logic blows away like autumn leaves. There are many excellent ideas set up in Frozen II, but as the plot reaches its conclusion, the disparate narrative elements blend into a baffling clump, mutating each thread from interest into apathy. It almost feels as if new ideas for the sequel were pitched over the course of several revisions of the script, and somehow each one made its way into the final draft. Again, I can see the excitement the filmmakers have for these stories, but they do not fit into a cohesive whole. At least one or two sub-plots could certainly have been cut to reduce the baggage, thus bringing the stronger narrative elements into the emotional foreground. 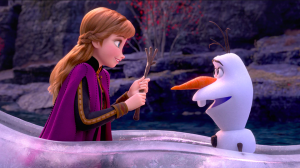 Characters Elsa, Anna, Kristoff and Olaf remain an endearing group, and when they are all together, the gang plays off one another as though they were always designed to do so. Voice actors Idina Menzel, Kristen Bell, Jonathan Groff and Josh Gad all bring everything they can to the film and work together wonderfully. It is a shame, then, that the story splits them up just over halfway through, and some of that joyous togetherness is lost until near the very end. Likewise with the songs this time around, each and every actor brings noticeable power and verve to the film’s new numbers but, unfortunately, few are anywhere near as notable as the first Frozen (admittedly, to achieve this would be a miracle). The film’s headliner ‘Into the Unknown’ (sang by Menzel) is as epic as it is catchy, and is undoubtedly the most memorable in the film, but I can’t help but hear the first film’s ‘Love is an Open Door’ in its chorus. The other songs are nice and always wonderfully visualised as I mentioned, but save for perhaps Olaf’s ‘When I am Older’, I struggle to recall many of them.

As a result, Frozen II falls into an odd place in the Disney sequel lineage. It is certainly a much more ambitious follow-up than the awkward home video adventures of old, but its disparities and overall haphazardness make it quite like one of those infamous second features. It simultaneously feels like a natural continuation of Frozen while also bloating it to the point of losing its character-driven charm in all the narrative spaghetti. Though not a ‘Princess’ feature, it reminds me of another Disney sequel – Pirates of the Caribbean: Dead Man’s Chest. That film also followed its blockbusting first entry with a sequel that, while having the same familiar characters and striking computer graphics, ultimately got lost in a scrambled plot that expanded to the point of impairment. Let us hope the third Frozen outing keeps its heart in focus.