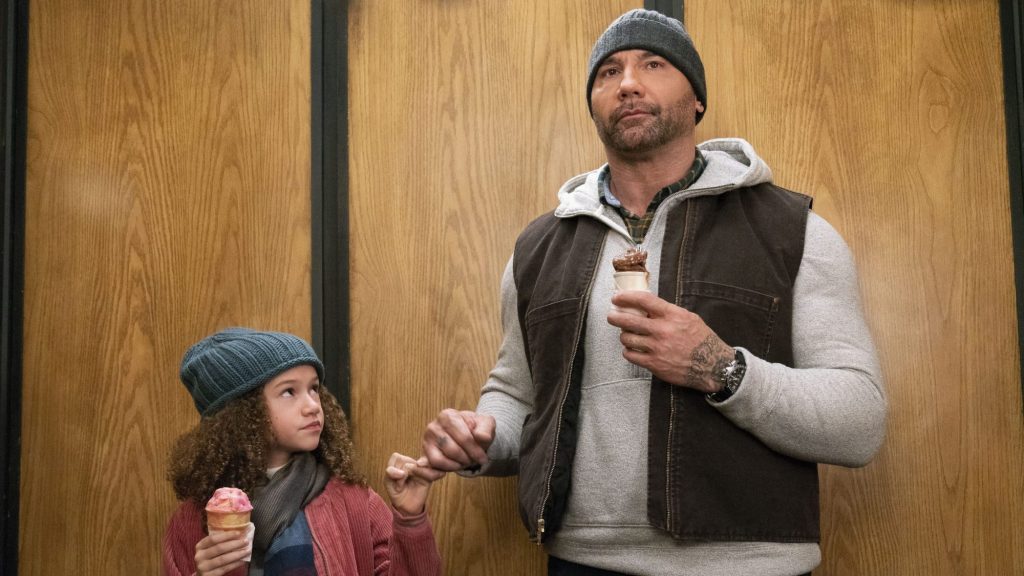 CIA operatives JJ (Dave Bautista) and his partner Bobbi (Kristen Schaal) find their surveillance operation compromised when they are discovered by wily nine-year-old Sophie (Chloe Coleman), the daughter of their target. In return for her silence, Sophie coerces JJ and Bobbi to teach her how to be a spy.

The most interesting thing about My Spy is that its theatrical posters can still be seen on the sides of buses. One of the last advertising runs before the lockdown, MWM Studios didn’t have enough time to retract the distributed material before being forced to sell distribution rights to Amazon Studios. Despite these posters advertising a theatrical release on March 13th, My Spy is now streaming as an Amazon Prime Original, available for all subscribers at no extra cost, unlike other sudden home releases (The Invisible Man, Trolls World Tour) which have charged a premium for viewing. With its wishy-washy plot and thinly sketched characters, however, I can’t imagine that My Spy would have done any better theatrically.

It’s a tried and true formula. The big, stern muscle-man meets a cute kid and bonding high jinks ensue. Schwarzenegger had it (sort of) with Kindergarten Cop, Vin Diesel had it with The Pacifier, and Dwayne Johnson had it with (my guilty pleasure) The Game Plan. It’s a cliché that works; there’s a reason for its repetition. We all love seeing a po-faced character find some humility, and the whole family can enjoy the mix between action, cutesiness and comedy, with children able to relate to the (often mischievous) kid and the parents relating to the exasperation of the unwitting adult. Dave Bautista is, regrettably, not quite the right choice for this role though. Don’t get me wrong, I have enjoyed Bautista immensely in the roles I’ve seen him in (his wasted part in the James Bond dud Spectre notwithstanding), and I can understand his casting. But with Bautista’s most famous role being the already over-the-top, comedic ‘Drax the Destroyer’ in Marvel Studios’ hit Guardians of the Galaxy films, the divergence doesn’t quite shine. Despite being equally as capable comedically, I can see the role fitting the likes of Jason Statham or Idris Elba a lot better.

Regardless, I know Bautista is a charming and talented performer, and the material he has been given does absolutely nothing to help him. Jon and Erich Hoeber’s script is woefully dull, more inclined to mock the sub-genre than it is to actually craft new and worthy material. Poking fun at the concept is one thing, but to then be devoid of any other humour is simply lazy. Why set up the subversion, only to then subvert nothing and make the set-up the only joke? Perhaps more damningly, the script incorporates several stabs at darker humour, perhaps aiming for the teen audience, that do nothing but alienate us from the characters and shatter the tone. JJ may well be a gruff soldier archetype, but his recurring retorts about how he and Bobbi could murder Sophie and her mother, and make it look like an accident, are just weird and unfunny. Combined with Peter Segal’s indifferent direction, My Spy seems to aim for a few different crowds and satisfy none of them.

It’s nice to see Luke Cage’s Parisa Fitz-Henley in a featured role, though, as she’s very clearly a talented actor and worthy of much better scripts than this. Still, she is a warm and sympathetic presence as Sophie’s struggling mother Kate. The same goes for the always wonderful Kristen Schaal, a queen of the voice-acting world who rarely appears in live action roles on film. She is unfortunately given a pretty one-note, underwhelming character as JJ’s techie assistant who just wants to work in the field (yawn), but Schaal works with what she has. Rounding off this trio of underutilised actresses is the young Chloe Coleman, who impresses as Sophie by making each of her character’s personal struggles believable, as well as being an effortlessly cool kid, despite the bland script. Hopefully My Spy can be a springboard for this talented young actress.

Perhaps it was best that My Spy went to streaming, as I can see it being ignored and forgotten even quicker if it were in cinemas. It’s passable at best, but so flat and uninspired that it barely reaches mediocre most of the time. There’s a neat concept in there, but the laziness of poking fun at its conventions, only to then do nothing else, makes the whole movie insistently forgettable. With misplaced, tone-deaf attempts at black-humour thrown in out of desperation, it doesn’t take a super-spy to spot this as a lifeless, boring shot at a reliable sub-genre.